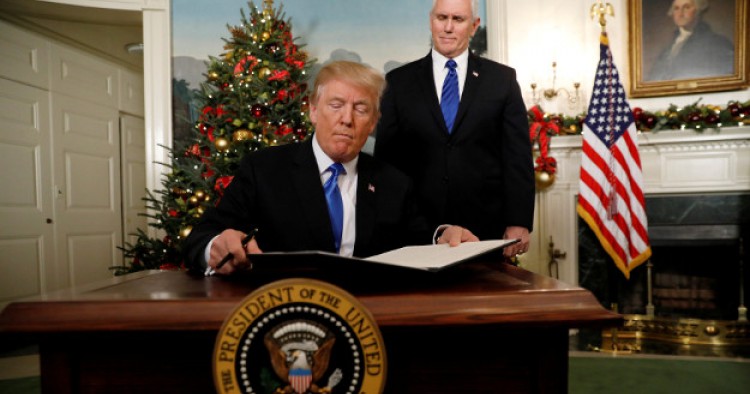 The Israel-Palestine peace process was largely dead already, but President Donald Trump’s siding with Israel on the most difficult and sensitive issue of Jerusalem makes any revival of even a semblance of the peace process all but impossible. By violating decades of U.S. policy, U.N. resolutions and international law, the decision also removes the United States as a credible mediator in future talks. The decision immediately weakens Palestinian Authority Mahmoud Abbas and strengthens the hand of Hamas. Of course, the decision was welcomed by the Israeli government, but it has undermined America’s partners in the Arab and Muslim world.

The announcement comes as excellent news for Russia, Iran, the Assad regime and their regional allies. By dismantling American leadership in the region—and around the world—Trump is helping Russia resume a central role in global affairs. President Vladimir Putin marked the occasion with a quick visit to Syria, Egypt and Turkey.

Iran and its allies have been desperate to change their image in the Arab and Muslim world after the sectarian carnage of Syria. Trump’s announcement is a valuable gift for them to relaunch their brand as the ‘Axis of Resistance’ against Israeli and American injustice, and the religious and emotive issue of Jerusalem is the jewel in the crown of that rebranding strategy. The announcement also strengthens the narrative of Salafi-jihadist terrorist groups as well as other Islamist extremists.

The Jerusalem move has no positive foreign policy outcomes for the United States or the region. It adds more fuel onto an already volatile region, and further isolates the US and weakens its influence.

Putin’s brief visit to Syria Monday was Russia’s latest attempt to convince the world of its victory—both in terms of defeating terrorism and saving Bashar al-Assad’s regime from defeat. The stage-managed nature of the public appearance also appeared to be designed to undermine the authority of Assad—who at times walked behind Putin, and had to fly to a Russian base to meet him—and place the Russian president at the helm of the ship.

This was, however, more aesthetics than reality. Russia may have turned its weapons more closely on ISIS in recent months, but over more than two years of military operations, the vast majority of its resources have been focused elsewhere. Moreover, ISIS remains operational, both within regime territory (where U.S. airstrikes continue to target it) and alongside it (where it appears to be left alone to fight opposition groups). In Syria’s northwest meanwhile, a whole host of jihadist groups remain active.

While Assad undoubtedly seems safe and secure in Damascus, he does not appear to be beholden entirely to Moscow. The regime’s recent behavior in Geneva; its continued violation of de-escalation agreements; and its facilitation of Iran’s inflammatory behavior all indicate a regime that is ultimately far more in sync with Tehran than Moscow.

Putin will pay an official visit to the Turkish capital Ankara today to meet with President Recep Tayyip Erdogan. High on the agenda will be the joint energy projects, Syria and Trump’s Jerusalem decision. Russia decided to speed up construction of its Turkish Stream pipeline, which will bypass Ukraine, fearing that sanctions proposed by the U.S. Senate will eventually shut down the project. Another energy project on the agenda is the Russian plan to construct Turkey's first nuclear power plant in the southern province of Mersin on the Mediterranean coast. The plant has an operational date set for the first reactor by 2023, and the plant is expected to be up and running at full capacity by 2025.

The talks are expected to be less smooth when the two leaders discuss the future of Syria. Russia has been promoting a role for the Syrian Kurds at the negotiations, which Turkey fiercely opposes. Russia is working closely with the Syrian Kurdish militia, the People’s Protection Units (Y.P.G.), in the fight against the Islamic State. The relationship has become closer in recent months; Russian warplanes are helping the Syrian Kurds battle remnants of Islamic State forces east of the Euphrates River. Ankara has so far refrained from criticizing Moscow publicly, but the issue is bound to cause friction.

Erdogan might not get an enthusiastic response from Putin on Trump’s Jerusalem decision either. Erdogan has been leading regional efforts to condemn the decision, but Putin is unlikely to go beyond a few symbolic critical remarks.