Not Our Kind of Caliph: Syrian Islamists and the Islamic State 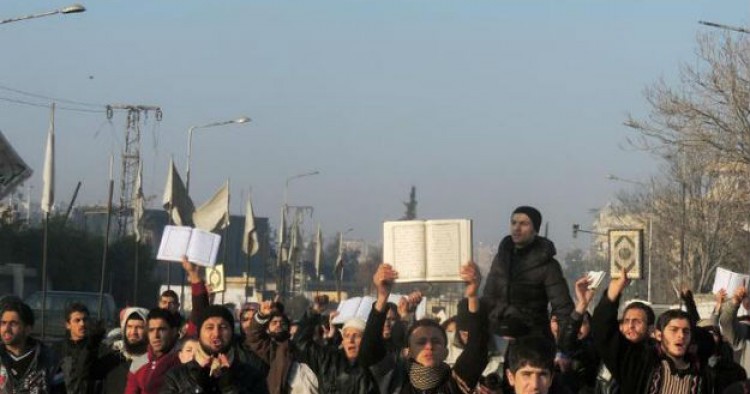 On June 29, the al-Qaeda splinter faction known as the Islamic State (formerly the Islamic State of Iraq and Syria, ISIS)[1] declared its leader Abu Bakr al-Baghdadi to be the caliph, or successor to the Prophet Mohammed, a post that no one has claimed since 1924.[2]

In theory, the Islamic State was ideally placed to assume a dominant role among the rebels in Syria, as it has in Iraq: in the preceding weeks, the Islamic State and other Sunni rebels had captured vast areas in Iraq, including the cities of Mosul and Tikrit. Reinforcements and captured equipment were immediately sent to Syria, where the group is also active.[3]

But since early January 2014, Baghdadi’s followers have been locked in a violent internecine conflict with virtually all other Syrian rebel factions. Most fighters in Syria were already hostile to the Islamic State, and they scoffed at Abu Bakr al-Baghdadi’s grandiose claim to global Islamic leadership.

In the Sunni Islamic tradition, a caliphate is far more elevated than a mere shari‘a court system, an emirate, or even a modern state; it is more like a papacy in classic Catholicism. A caliph acts as the spiritual and temporal ruler-for-life of all the world’s Muslims. The Islamic State’s June 29 statement insisted that it is now “incumbent upon all Muslims to pledge allegiance” and that all other Islamic “emirates, groups, states, and organizations” must be terminated.[4]

Most of the world’s Sunni Muslims have simply shrugged this off as the antics of a faraway extremist sect, but rebels in Syria could hardly ignore the challenge to their legitimacy. Many Syrian fighters are themselves deeply religious and ostensibly committed to the ideal of a reestablished caliphate. Islamist factions have responded with particularly forceful denunciations and Quranic counter-arguments, seeking to reassert their own religious credentials and to dissuade members from accepting Abu Bakr al-Baghdadi’s bid for caliphal legitimacy.

“It was very predictable,” says the University of Edinburgh’s Thomas Pierret, author of a well-received book on Islamic movements in Syria.[5] “What I found more interesting was what happened just before it ... They were very happy about the Sunni uprising [in Iraq], but they didn’t want to give the Islamic State credit, so you had a sort of emphasis on how it was an all-Sunni uprising, not just the Islamic State.” In Pierret’s view, “maybe the ‘caliphate’ actually made things easier for some of them, because it was something that they could easily criticize.”[6]

“Our people's revolution was an uprising against tyranny, injustice, oppression, and misery,” the Syrian Muslim Brotherhood shot back on July 5, “and we will not replace one tyrant by another. A caliphate according to the prophet's method would be a righteous and consultative caliphate, respectful of rights and encouraging of interests; one that is merciful to the people and just, enlightened, intellectual, civilized, free, and dignified, providing security and safety for the citizenry. But the reality of this so-called state, or the so-called caliphate, is that it rules by power and oppression.”[7]

The Syrian Islamic Council[8] – which includes several of Syria’s most prominent independent Sunni preachers as well as some Muslim Brotherhood members and the so-called Surouri salafis – responded in a similar vein on July 6, dismissing the Islamic State as an extremist “clique that ... does not represent anyone but itself.”[9]

The Islamic Front, which gathers some of Syria’s largest Islamist rebel groups, was no more receptive. “Any caliphate, emirate, or government that is imposed without people's free choice has no legitimacy to exist,” stated the head of the Islamic Front’s Political Office, Hassane Abboud, who also leads the powerful faction known as Ahrar al-Sham. “The restoration of an Islamic caliphate is a prophecy of the Prophet Muhammed, peace be upon him,” says Abboud, “but we don't believe that it has any relationship with the Islamic State’s declaration.”[10]

“It is not the way that Muslims make a caliphate. It is a kind of dictatorship forcibly subjecting people to one man and one group of people,” adds Abdurrahman Saleh, a spokesperson for the Islam Army, another Islamic Front faction. Saleh accuses the Islamic State of killing innocents and of imposing “their mistaken understanding of Islam on people by force.”[11]

Jabhat al-Nusra at the Crossroads

As expected, the Islamic State’s surge in Iraq and its declaration of a caliphate have been most destabilizing to its former comrades-in-arms in Jabhat al-Nusra, the Syrian al-Qaeda affiliate.

The April 2013 split between Jabhat al-Nusra and the Islamic State has broken the global jihadi movement into two closely related but competing ideological tendencies. Joas Wagemakers of Radboud University, who is an expert on militant Islamist ideology, notes that the most famous ideologues and thinkers of modern jihadism have nearly all sided with Jabhat al-Nusra and al-Qaeda’s international leadership, dismissing the Islamic State’s caliphate as “premature, ill-prepared, illegitimate and generally a bad idea at this time and in the hands of al-Baghdadi.”[12] But the Islamic State appears to attract more recruits from abroad and it now controls vast areas in both Syria and Iraq, raising its profile in the eyes of prospective fighters and financiers. By contrast, Jabhat al-Nusra has lost territory, members, and crucial infrastructure such as oil wells to the Islamic State. This has contributed to the factionalization of Jabhat al-Nusra, as members and leaders respond differently to the challenge presented by the Islamic State and blame each other for the recent defeats.[13]

In response, Jabhat al-Nusra seems to be recalibrating its approach to the Syrian rebellion. Until now, the group has quietly exerted influence from within the broader Islamist environment, in contrast to the Islamic State’s ruthless drive for hegemony. But in a voice recording leaked online in early July, a man identified as the group’s leader, Abu Mohammed al-Golani, spoke of establishing an Islamic emirate in Syria. Without confirming or denying the authenticity of the tape, Jabhat al-Nusra has since said that while it does indeed wish to transform Syria into an Islamic emirate, it will not do so until it has the requisite backing from other rebels and Islamic scholars.[14] Whether or not this reflects a shift toward unilateralism, tension between Jabhat al-Nusra and other rebels is clearly rising.

Limits to the Islamic State’s Expansion

The declaration of the “caliphate” has shifted the terms of the debate, further inflaming the Islamic State’s relations with other Syrian Islamists and cementing the split in global jihadism, but it hasn’t changed realities on the ground. Flush with arms and new recruits, the Islamic State now enjoys strong momentum in Syria. In June and July, it swept up the Euphrates, easily expelling its Jabhat al-Nusra, Islamic Front, and Free Syrian Army rivals from eastern Syria, while absorbing defectors from all these groups as well as minor local factions.[15]

However, there are clear limits to the growth of the Islamic State. The unprecedented step of declaring Baghdadi to be Islam’s caliph may have rallied hardliners and upstaged al-Qaeda in the intra-jihadi debate, but it also seems to have further alienated the Sunni Muslim mainstream and narrowed the Islamic State’s prospective popular base.

As a genuine nation-building project, the Islamic State caliphate is most likely doomed; it is rejected by most potential allies and lacks all international support. If or when their battlefield fortunes take a turn for the worse, Baghdadi’s followers may find themselves dangerously isolated among a myriad of local actors with an axe to grind. But even if the would-be caliphate ultimately collapses, or contracts back into fringe warlordism and transnational terrorism, its recent expansion has already destroyed or displaced many alternative actors, adding to the fragmentation of local Sunni communities and undermining prospects for the re-stabilization of Syria and Iraq.

[4] Ibid., from the al-Hayat Media Center translation with minor edits by the author.

[9] “Bayan hawla butlan i'lan al-khilafa min qibl tanzim dawlat al-’iraq wal-sham” (“Statement about the invalidity of the announcement of the caliphate by the ’State of Iraq and the Levant’ organization”), the Syrian Islamic Council’s Facebook site, 6 July 2014, https://www.facebook.com/syrian.islamic.council/posts/828228567197079.