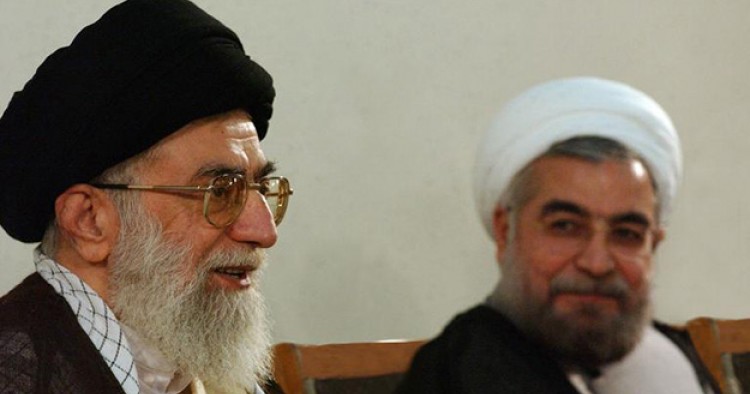 As Iran and the United States negotiate with the aim of reaching a diplomatic nuclear settlement by November 24, 2014, no one can doubt the potential implications of the talks. A deal could herald a new era not just in American-Iranian relations but in the geopolitical landscape of the entire Middle East. America’s Arab allies that are still suspicious of Iran will question the wisdom of Washington’s approach to the Iranian challenge. Yet a failure to reach a deal risks the collapse of the diplomatic track in which both Washington and Tehran have greatly invested as the preferred path toward a resolution. That is why there will most likely be further extensions of the talks in the event that the November 24 deadline is missed.

In any event, there is a tendency to attribute the recent years’ marked shift in America’s Iran policy—and Washington’s eagerness to negotiate with Tehran—to one man, Barack Obama, who came to office with a pledge to overturn the bad blood between the United States and Iran. But Obama’s policy preferences alone could not have brought us to this point.

To begin with, few in Tehran had imagined Obama as a transformer of U.S.-Iran relations. Obama’s 2008 election was arguably far more of an event in the Arab world than it was in Iran. Among ordinary Iranians, it was not that Obama’s message of change and renewal went unnoticed. That much the Iranians could readily observe. The lack of euphoria among Iranians was instead rooted in the prevalent belief that the ethnicity and the political message of the occupant of the White House cannot undo three decades of hostilities between Iran and the United States. Nor could the arrival of Obama alter the ideological red lines of some of those in power in Tehran.

Elements of the Islamist regime in Tehran go out of their way to remind Iranians frequently about the depth of hostility between the two countries and how this enmity is a necessary pillar for revolutionary rule in Iran. And yet on Obama’s watch Tehran and Washington have come the closest to functioning diplomatic ties since the 1979 Iranian Revolution and the break off of relations. But it is important to note that this development is not tantamount to a sweeping ideological introspection in Tehran.

No doubt the moderate wing of the Iranian regime has engaged in a process of soul-searching since the early 1990s. Amongst others, the moderates—perhaps best epitomized by reformist President Mohammad Khatami’s call for a “dialogue among civilizations”—have long questioned the logic behind open-ended hostility toward the United States. On the other hand, the hard-line faction in Tehran, which is effectively spearheaded by Supreme Leader Ayatollah Ali Khamenei, has never engaged in any meaningful ideological soul-searching. To that faction, the orthodoxies of yesteryear, including hostility toward the United States, have remained the most pertinent to the Islamic Republic’s staying power.

But the combination of three separate events increasingly made the position of the hard-liners in Tehran untenable and has brought us to where we are today.

The first was the emergence of the 2009 Green Movement following Iran’s disputed presidential elections. The second factor was the emergence of the “Arab Spring” from early 2011 and the massive destabilizing impact it had on Tehran’s foreign policy. The hard-line faction in Tehran had hoped that the Islamic Republic would be the main geopolitical beneficiary of the Arab revolutions with the arrival of a new crop of Arab Islamist governments that would align with Iran. That was not to be, a reality that reinforced the position of moderate voices in Tehran, who had long urged a reassessment of foreign policy priorities. The third factor was the intensification of the sanctions regime against Iran from 2012, which began to bleed the Iranian economy in an unprecedented and unexpected fashion.

Obama’s policies were only responsible for creating one of these headaches for Khamenei, namely the strengthening of sanctions. Nonetheless, Obama’s openness to the idea of a détente with Iran combined with the emergence of the abovementioned events proceeded to make the second Obama term in the White House the most potent opportunity for a diplomatic breakthrough since 1979. If this is accomplished, it will not only be groundbreaking in American-Iranian relations but will probably become the most significant foreign policy achievement of the two-term Obama administration.

In the context of policy drivers in Tehran, it is Khamenei’s desire for the Islamic Republic to survive as a political model that is at the heart of the present process of rapprochement toward the United States. The convergence of a number of factors had made a reassessment of Iran’s posture toward the United States inevitable. In a September 17, 2013 speech, Khamenei himself openly admitted to this hard reality when he declared that at times “heroic flexibility” is needed in Iran’s diplomacy for the country to be able to safeguard its interests and those of the Islamist regime in Tehran.[1]

The Shadow of 2009 and Regional Chaos

When polled by international firms, the Iranian population is amongst the most pro-American in the Islamic world.[2] This general Iranian goodwill toward America has been in place for most of the life of the Islamic Republic and exists despite some three decades of vitriol against the United States by Tehran’s Islamist authorities. The fact that around one million Iranians have immigrated to the United States since the founding of the Islamic Republic convincingly illustrates Tehran’s failure to demonize all things American.[3]

At the same time, this broad goodwill has never been conditional on some hope about the policies of the United States being a catalyst for political change within Iran. For example, when on June 4, 2009 Obama gave his speech in Cairo about a new era of American relations with the Islamic world, the speech barely registered with ordinary Iranians or the country’s officialdom.

But about a week after Obama’s speech, after unrest broke out following Iran’s disputed presidential elections of June 12, there was a moment when Iran’s Green Movement supporters began chanting “O-ba-maa,” which in the Persian language means “He is with us,” in reference to the American president.[4] But that was a fleeting sentiment in a moment of heightened political rivalry. Obama was never really seen as an enabler or the savior of Iran’s opposition movement then or now.

In fact, the main lesson that Khamenei took from 2009, which was shaped during the course of the next two years, was only tangentially tied to the question of America and Obama. In the violent dispute over the outcome of the elections, Khamenei took the side of the outsider incumbent President Mahmoud Ahmadinejad against a Green Movement that was jam-packed with moderate and pragmatic figures that had once—going back to the 1980s and 1990s—been Khamenei’s cohorts.

Over the course of those two years, Ahmadinejad opted to veer sharply away from Khamenei’s political line in an attempt to carve out a permanent political space for his faction in the ranks of the Islamic Republic. Elsewhere, on the international stage, the intransigent nuclear stance that Ahmadinejad—backed in that instance by Khamenei—had pursued was by 2012 increasingly unsustainable given the rising pains of international sanctions. Ahmadinejad and his faction thus became a political liability for Khamenei but also a convenient scapegoat for the regime’s otherwise questionable nuclear strategy, with a growing number of voices calling for a policy reassessment. It was in this heated political context that Iran held presidential elections in June 2013.

Khamenei, seemingly having accepted that moderate forces, while having undesirable reformist tendencies, are nonetheless known and tolerable entities, barred the Ahmadinejad faction from fielding its candidate, Esfandiar Rahim Mashaei. Instead, Hassan Rouhani, a key moderate figure from the ranks of the regime, was approved by Iran’s vetting body, the Guardian Council, and won decisively in the elections.

From Washington’s perspective, Rouhani’s arrival was at a minimum a symbolically critical development. After coming to office in 2005, Ahmadinejad had quickly managed to turn himself into a populist but toxic figure as far as America was concerned. Ahmadinejad’s presence on the stage did not in any way help the cause of détente between Tehran and Washington. Rouhani, on the other hand, came with an extended olive branch, and the Obama administration let it be known immediately that it was open to the pursuit of a process of détente. That was certainly the key headline from the historic phone conversation that Obama had with Rouhani in September 2013.

One of Rouhani’s chief slogans in the election campaign was the pledge to pursue a foreign policy that is conciliatory and that emphasizes improving ties with the West. Rouhani might not have often mentioned the United States by name in his election race, but there is no doubt that he had secured the tacit blessing of Khamenei to explore ways to break the ice with the Americans.

If nothing else, the political well-being of the Islamic Republic made it necessary that Iran behave more flexibly. Khamenei had himself set the stage for a détente with Washington shortly after Rouhani’s election when he spoke of the need for “heroic flexibility” as Iran tackles its various foreign policy challenges, from long-standing disputes with the Americans to the emerging challenges caused by the Arab revolutions since 2011. There can, however, be little doubt that Khamenei’s “heroic flexibility” is not an open-ended and unconditional compromise. The Iranian leader is above all looking to break the grip of international sanctions on Iran. For Khamenei, somewhat better or even the normalization of relations with Washington is at best a byproduct of the process that Tehran needs to undertake in order to free itself of the painful sanctions that have cut its oil revenue in half since 2012 and put its economy—and hence social-political stability—at risk.

The fact that Obama is widely considered in Tehran as the best window of opportunity Iran has had since 1979 to kick-start a policy of rapprochement with the United States is beyond doubt. For the Iranian moderates, a process of détente with Washington is considered long overdue. They have advocated for it going back to the mid-1990s, although never as explicitly as they do today. Rouhani is no doubt part of this school of thought. For this group, the costly international sanctions of recent years and the destabilizing impact of the Arab revolutions have only hastened the need to find some kind of accommodation with the United States to serve Iran’s national interests.

But for Khamenei, the necessity for compromise with Washington has been far more based on a narrow and immediate goal: the breaking of the crippling international sanctions regime that took him by surprise. He remains, however, far more skeptical about Washington’s long-term intentions toward the Islamic Republic as a political model. Khamenei is therefore considerably less flexible in his dealings with Washington than his touted “heroic flexibility” might otherwise suggest.

Regardless, what has made the present process of détente possible is the fact that circumstances—mostly beyond Washington’s control—led to the return of moderates to the centers of power in Tehran. They have in turn been able to somewhat shift the narrative from the inevitability of American-Iranian hostilities to the potential benefits for Iran in the event of a successful rapprochement with Washington. For now, Khamenei is supportive of this tactical shift, but he remains the critical and yet skeptical player in Iran’s byzantine policymaking process.

Obama and his legacy can certainly be a beneficiary of this newfound Iranian consensus on the question of America, but the U.S. president was at best only a partial contributor to this policy transformation in Tehran.