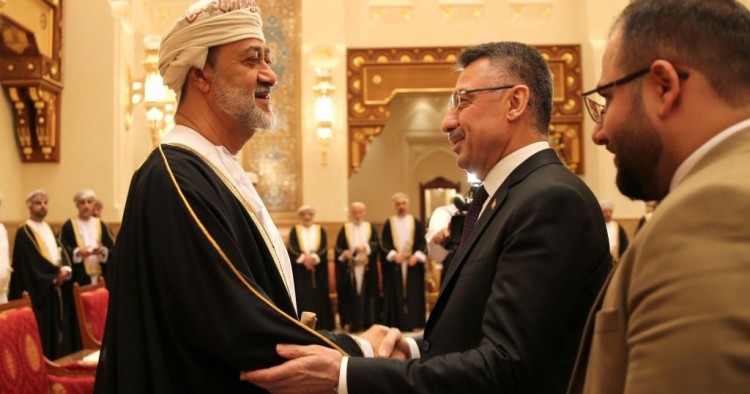 The announcement of Sultan Qaboos bin Said al-Said’s passing on Jan. 10 marked the end of an era. Now that the Arab world lost its longest-serving leader, no Gulf state has a ruler who was on the throne when the Gulf Cooperation Council (GCC) was established in 1981. Most Omanis have never known another leader and this transition period, marked by three days of mourning, is an emotional time for those in the sultanate.

As Omanis begin the post-Qaboos period with Sultan Haitham bin Tariq al-Said at the helm, the country’s leadership is sending an important message to the world about unity, cohesion, and continuity. The members of the ruling al-Said family respected the will, and trusted the judgement, of Sultan Qaboos by having authorities open an envelope containing his choice of successor.

It was important for the Omani state to move through this process quickly and decisively, not allowing rumors of any infighting over succession to emerge during this sensitive transition. In his final years at the helm, when Sultan Qaboos was battling cancer, no publicly-designated successor was named. For years, various journalists, analysts, and scholars — along with the CIA — seriously considered the possibility that the succession process might not go smoothly. In waiting for the new sultan to be named, there was much anxiety in Oman, and elsewhere certain regional experts raised questions about the sultanate’s political cohesion and national unity. Yet as Kristian Coates Ulrichsen observed, the transition “proceeded rapidly and smoothly, just as Omani officials had quietly predicted it would.”

In Sultan Haitham’s first remarks as the Omani head of state, he vowed to uphold the principles that guided Muscat’s foreign policy agenda during his predecessor’s nearly five decades on the throne. “We will follow the same line as the late sultan, and the principles that he asserted for the foreign policy of our country, of peaceful coexistence among nations and people, and good neighborly behavior of non-interference in the affairs of others.”

Throughout the past five decades, dialogue and accommodation — not confrontation — have shaped Muscat’s foreign policy. Since Sultan Qaboos ascended to the throne in 1970, Oman has never cut off diplomatic relations with any government, and Omanis see constructive engagement with all regional actors as useful. Under Sultan Qaboos, Oman went to pains to maintain relative neutrality in regional conflicts, avoiding pressures for Muscat to join any blocs that would have required the sultanate to align with or against certain states.

When Egypt and Israel signed a peace treaty in 1979, Oman was one of only three Arab League members to oppose isolating Cairo. Unlike the other GCC capitals, Muscat stayed neutral in the Iran-Iraq war and its diplomats worked to broker cease-fires between Baghdad and Tehran. After the Syrian conflict broke out in 2011, Oman was the only GCC member that never cut off official relations with Damascus. That same year, as Libya’s “Arab Spring” revolt erupted, Oman (unlike Qatar and the UAE) did not intervene militarily in the crisis.

In 2015, Muscat broke with the other five GCC capitals and stayed out of the anti-Houthi coalition in Yemen. Amid the Saudi-Iranian crisis of early 2016, Muscat was the only Arab Gulf capital that took no diplomatic action against Tehran. The following year, when three of the GCC’s member states, Saudi Arabia, Bahrain, and the UAE — plus Egypt — began blockading a fourth, Qatar, Oman refused to join the bandwagon.

It is important for outsiders to understand that Muscat’s “friends of all, enemies of no one” foreign policy is a part of Omani identity that will outlive Sultan Qaboos. Bombing Yemen, threatening Iran, blockading Qatar, and arming extremists in Syria are moves taken by other GCC members that nearly all Omanis would have opposed their country doing, regardless of who was on the throne.

The strategy of pursuing coexistence and positive relations with all neighbors has enabled Muscat to position itself as a diplomatic bridge in the region. Under Sultan Qaboos, Oman has often been a neutral platform for dialogue between adversaries that would have normally never communicated directly. In recent years, Oman has facilitated peace talks on Yemen and the negotiations that led to the Joint Comprehensive Plan of Action (JCPOA). In 2018, Oman became the first GCC member to host Israeli Prime Minister Benjamin Netanyahu while in 2019 Muscat announced plans to open an embassy in the Occupied Palestinian Territories.

Without a doubt, there was never going to be an easy time to lose Sultan Qaboos. Yet amid the escalation of tensions between Washington and Tehran in late 2019 and early 2020, this is a particularly unfortunate time for the region and international community to lose such a respected statesman and advocate for peace in the Middle East.

What remains to be seen is how other GCC members — namely Saudi Arabia and the UAE — will respond to the transition in power, and if they might seek to pressure Sultan Haitham into shifting Muscat into closer alignment with them against Iran, and perhaps the Qatari-Turkish alliance as well. Having monitored Saudi Crown Prince Mohammed bin Salman and Abu Dhabi Crown Prince Mohammed bin Zayed’s “maximalist” foreign policies in recent years, some Gulf experts have posited that Oman could possibly become a victim of pressure from Riyadh and Abu Dhabi, as Doha was back in 2014 and 2017.

Indeed, Oman’s balancing act has become increasingly difficult to maintain during the presidency of Donald Trump. In Kristin Smith Diwan’s words, “when ultimatum takes precedent over negotiation” in the Gulf — as exemplified by Washington’s abandonment of the JCPOA, the Saudi-led military campaign in Yemen, and the blockade of Qatar — Oman is threatened by “forceful campaigns to remake the regional order.” Muscat’s vision for the region is based on resolving conflicts diplomatically and advancing economic integration, including with Iran and Qatar, not isolating its fellow Gulf countries.

This year, it will be important to see where Sultan Haitham travels on official visits. In the region, will he first visit a fellow GCC state or fly across the Gulf to Tehran? Internationally, will Oman’s new leader consider visiting Beijing or New Delhi before London or Washington? Time will tell.

Ultimately, Muscat’s neutral stances on regional geopolitical crises are driven by its own national security and economic interests, which are closely linked. Domestically, Oman’s government must deal with high youth unemployment and sluggish economic growth. Throughout the final years of Sultan Qaboos’ time on the throne, these issues were the main difficulties that Oman was facing at home, and Sultan Haitham will have to tackle them head on. Oman is aware that more investment from increasingly diverse sources is key to its long-term development interests, particularly in relation to the sultanate’s ports and infrastructure. Good relations with as many countries as possible is crucial to Oman achieving economic diversification and continuing its track record of successful diplomacy.

For the U.S., there is much to gain from a continuation of Washington and Muscat’s close relationship. While Washington and Tehran’s brinkmanship heats up, the dangers of a catastrophic war erupting in the Middle East must be taken seriously. To avoid such a nightmarish scenario, the U.S. will need to take advantage of potential interlocutors and avenues for de-escalation. Oman has been, and remains, one of them. With Sultan Haitham determined to maintain his predecessor’s independent foreign policy based on balance, tolerance, and diplomatic engagement, officials in Washington would be wise to realize Oman’s value as an important American ally and work closely with Sultan Qaboos’ successor.

Giorgio Cafiero is the CEO and founder of Gulf State Analytics, a geopolitical risk consultancy based in Washington, DC. His research interests include geopolitical and security trends in the Arabian Peninsula and the broader Middle East. The views expressed in this article are his own.