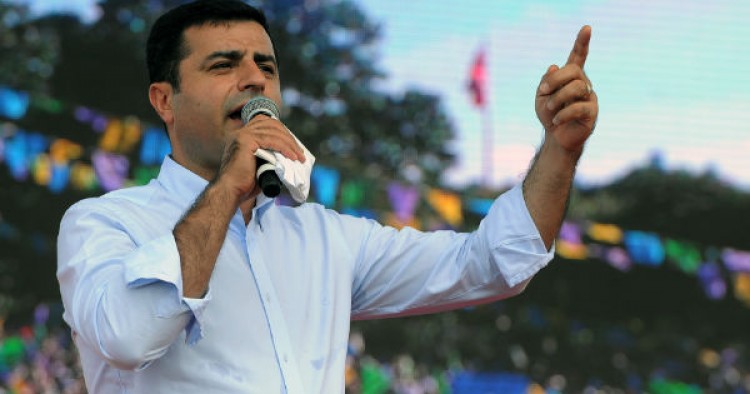 A recent statement from the imprisoned leader of the Kurdistan Workers' Party, Abdullah Ocalan, hails a new era for Turkey’s Kurds. In a statement from his cell on the prison island of Imrali in the Sea of Marmara, Ocalan said that Turkey was now on the verge of "historic developments" after last week's presidential elections and declared that through a major democratic negotiation, the 30-year war was coming to an end.

Although he came in last in Turkey’s first direct presidential elections, the pro-Kurdish Peoples’ Democratic Party candidate Selahattin Demirtas is a significant winner. He increased his party’s votes from 7 percent in March local elections to 9.76 percent. His electoral gain has implications for the future of the Kurdish political movement.

Those who were critical of the government’s failure to hold up its end of the deal when it launched the “peace process” in late 2012 hoped that Recep Tayyip Erdogan would not win the presidential elections in the first round. This, the logic goes, would strengthen the hands of Turkey’s Kurds at the negotiation table and enable them to secure more concessions from the government. To the dismay of many, this did not happen; Erdogan won the race in the first round. But there is still some room to be cautiously optimistic about the future of the “peace process”; at least the election results say so.

Erdogan did not sweep to a landslide victory. He won the election with only 51.95 percent of the vote, slightly higher than the minimum required to win the election. This means Erdogan needs the Kurds to realize his dream of transforming the parliamentary system into a US-like presidential one, a transformation that requires a constitutional change. To change the constitution, Erdogan will need the support of two thirds of the members in the parliament.  His party, the Justice and Development Party (AKP), now holds 58 percent of parliament seats. The party either has to win the 2015 general elections by a large margin, or Erdogan must cultivate the support of other parties in the parliament to secure the two third backing he needs to push through the constitutional amendments. Judging by the results of presidential elections and the challenges ahead for the post-Erdogan AKP, a substantial increase in AKP’s votes in 2015 seems unlikely.

This makes the Kurds the kingmaker in Erdogan’s drive to introduce an executive presidency. The Kurds should play their hand wisely and capitalize on the window of opportunity until the 2015 general elections to push the government to carry out the reforms to address Kurdish demands.

After capturing 9.76 percent of the vote in presidential elections, Selahattin Demirtas is well positioned to do so.  The mere fact that a Kurdish candidate who has championed the Kurdish cause throughout his political career ran for the presidency is an indication that the Kurdish political movement in Turkey has come a long way from its early days. It has revised its strategy to be more in tune with the newly emerging domestic and regional dynamics, dropped its quest for independence, and adopted an agenda that seeks “democratic autonomy” within a democratically consolidated Turkey. The armed struggle seems to have taken a back seat in the Kurdish quest for change.

Before the local elections in March, Turkey’s Kurds launched the Peoples’ Democratic Party in an effort to expand their base and appeal to the non-Kurdish segments of the country. Throughout his election campaign, Demirtas used an inclusive rhetoric often focusing on the urgent need for rule of law, accountability, freedom of expression, and democratic consolidation. His critique of homophobia, xenophobia, and the neoliberal economy and call for a non-sexist, ecological, egalitarian, social, and libertarian order seems to have resonated well among left-leaning Turks who have been alienated from the People’s Republican Party and Nationalist Movement Party’s joint candidate Ekmeleddin Ihsanoglu. Demirtas’s electoral campaign won the praise of a large portion of voters from members of the lesbian, gay, bisexual, and transgender community to workers and managed to reach out beyond its traditional strongholds. Demirtaş garnered votes from the Black Sea region and the Aegean and Mediterranean coastal cities, places that have traditionally been out of reach for the Kurdish political movement.

The Kurds might be on the brink of a new breakthrough: The seismic shifts the region has been undergoing have created new opportunities for the Kurds of the region. However, intra-Kurdish rivalries might present a challenge.

Selahattin Demirtas has been a rising star. With his performance in presidential elections, he secured his place in Kurdish politics as a leader who can appeal to a wider base. Abdullah Ocalan is uneasy with Demirtas’s rise. Reportedly, he asked Riza Turmen, a member of parliament from the main opposition People’s Republican Party, to run on the Peoples’ Democratic Party ticket in the presidential election; Turmen declined the offer. If Ocalan does not get in the way, Demirtas’s electoral victory might be the harbinger of a new era for Turkey’s Kurds.