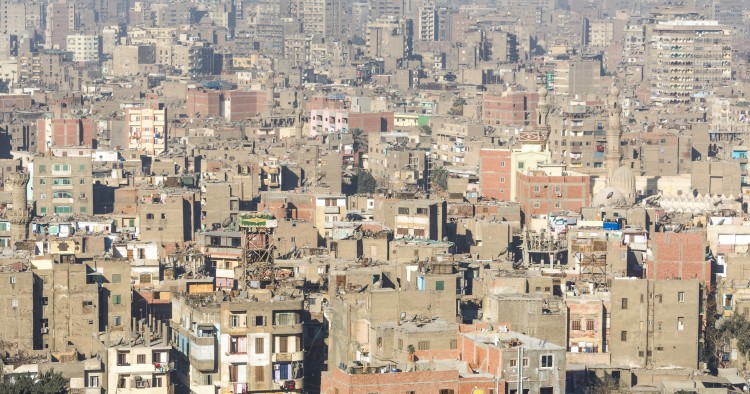 With a population growing at a rate of approximately 2 percent per year, Egypt is faced with an urbanization crisis, as many of its cities find themselves increasingly overcrowded. Egypt’s housing crisis affects millions across the country, and, if the Sisi government is looking to further consolidate its power, it must ensure that it maintains the support of the country’s poor urban communities, which have historically revolted against worsening living conditions. Thus, it is no surprise that the Sisi government highlighted housing and urbanization as central to their agenda in mid-2015 during the Egypt Economic Development Conference (E.E.D.C.) held in Sharm el-Sheikh.

The most visible symptom of Egypt’s urbanization problem has been the lack of low-income and social housing available across the country. The housing ministry has estimated that 500,000 new homes need to be built every year for five years to keep pace with the expanding population and to address the estimated backlog of 3 million housing units. In 2014, the country signed a $40 billion agreement with the U.A.E.’s Arabtec to develop 1 million housing units. Although the deal broke down in mid-2015, the government has continued with its pledge to develop the number of units required to meet the current demand.

However, there are concerns that the speed of delivery has been too slow and has not alleviated the pressures being caused by the shortage of housing. As a result, Egypt’s government set a new timeline for the completion of public and middle-income housing units, according to a cabinet statement in April.[1] The statement went on to say the government has committed to delivering about 300,000 housing units by the end of 2016. Cairo also plans to deliver about 750,000 housing units by the end of 2018, in addition to 135,000 units for those currently living in informal housing.

The new timeframe was announced amid criticism from the newly elected parliament regarding the housing ministry’s speed of delivery. The chief problem facing Cairo as it attempts to press ahead with large numbers of social and low-cost housing units is its ability to finance such schemes. The government’s budget has been stretched in recent years as revenues from the Suez Canal, tourism, and foreign aid continue to decline.

The original deal with Arabtec for 1 million homes collapsed due to a disagreement between the Dubai-listed firm and the government over the raising of funds through local banks.[2] Egyptians objected strongly to the practice. The government has been trying to entice the private sector to get involved in the development of similar deals, but high land prices often mean private developers prefer to build middle-income and luxury residential projects instead.

Nonetheless, earlier this year, the Arab Union for New Urban Communities submitted a request to the housing ministry to build 30,000 residential units in the New Capital City. The project is estimated to cost $3.8 billion and will be financed by private investment, according to local reports in a number of Cairo-based newspapers.

Although Kuwaiti investors and the Egyptian housing minister have expressed similar interests, it is difficult to see how Egyptian authorities will deliver the number of units required without some social disruption—particularly when expansion requires the relocation of poor residents from slum neighborhoods in major cities.

A major issue facing Egyptians is that the informal economy has reached what many analysts describe as an unmanageable level. Statistics estimate the informal economy makes up about one-third of the country’s overall economy, with similar numbers living in slum dwellings and/or illegal buildings.[3]

“Small, illegal developers have found they make a lot of money from-low cost housing,” says Yehia Raafat, a partner at Egypt’s Raafat Miller Consulting. “But real developers feel they will struggle to make the same returns on a larger scale.”

Within these inner-city slums in major metropolitan hubs, such as Alexandria and Cairo, crime and lawlessness have emerged as major side effects of this increase in informal housing. Petty and major crimes have become widespread as local gangs strong-arm residents and illegal developers. This phenomenon has become more constant since the 2011 revolution, with the decay of state authorities following the fall of the Mubarak regime.

Police do not seem equipped to stop or contain the immense level of crime and corruption associated with informal housing, even after the return of the deep state. Apart from crime, other severe consequences include health issues caused by a lack of proper sanitation.

To house some of Egypt’s poorest, the government has opted for a series of slum redevelopments. If Egypt can offer an attractive investment environment for local and international developers, it has a greater chance of pressing ahead with affordable and low-cost schemes across the country.

For the time being, Cairo has maintained its commitment to press ahead with the New Capital City. News that work has started on the first phase is a further illustration that the authorities believe in a de-urbanization strategy rooted in getting people out of Cairo, rather than redeveloping the ancient city.

However, the task of building a new city and pursuing a strategy of de-urbanization is not only a matter of constructing more housing units. The government must ensure that new developments include proper services, such as health, education, and other public facilities and adequate transportation to give communities an opportunity to thrive and prevent them from degenerating into worse slums. Improving the living standards of Egyptians has been described as essential to ensuring the country’s social and political stability and must be done with the utmost prudence and efficiency in urban planning.[4]

A nationwide symbol of informal transportation is the tuk-tuk—a prime reflection of the country’s lack of proper transportation infrastructure. The authorities have routinely failed at building integrated communities as an alternative to inner-city slums. This needs to be rectified.

During a speech last month at the inauguration of a housing project in Moqattam, the Egyptian president explained that one of the aims of the Tahya Masr (Long Live Egypt) fund is tackling national projects, such as ending the issue of informal housing.[5] The fund was established as an account to accept donations from the public. Moreover, he vowed to end the problem of informal housing in the next two years.

In post-revolutionary Egypt, the 2014 constitution stipulated the right of every citizen to adequate housing and held the state accountable in that respect. As a result, the state has been expected to solve these issues of slums and informal housing through efficient planning of infrastructure development.

Many of Egypt’s poor will be looking for quick results from the government, and, considering the massive public campaign of promises made by the housing ministry, some may become increasingly frustrated with the speed of delivery.

The high levels of poverty in Egypt are seen as an indirect cause of political unrest. According to the World Bank, 25.2 percent of Egyptians are living under the poverty line, and 25 percent are illiterate.[6] Drastic improvements in living conditions are seen as necessary to stabilize the country and prevent the types of mass agitation Egypt has witnessed over the past few years.

President Abdel Fattah el-Sisi currently enjoys widespread support from poor urban communities, but these very communities also played a significant role in the large anti-government protests against both the Mubarak and Morsi governments. The catalysts for these protests were often power outages and poor public services, which subsequently took on a more political nature.

An inability by the government to build fully integrated communities outside of the city—and lure current low-income earners from the main urban cities—will also mean that prime real estate across cities such as Cairo and Alexandria will fail to attract both local and foreign investors. Foreign direct investment is an important component of Egypt’s plans to improve the economy. If it is unable to offer prime real estate land in its main cities, it will risk a further decline in interest from foreign developers.

The ministry of housing is racing against time as it desperately looks to improve living standards in order to ensure that the state maintains the widespread support it receives from Egypt’s poorest urban communities.