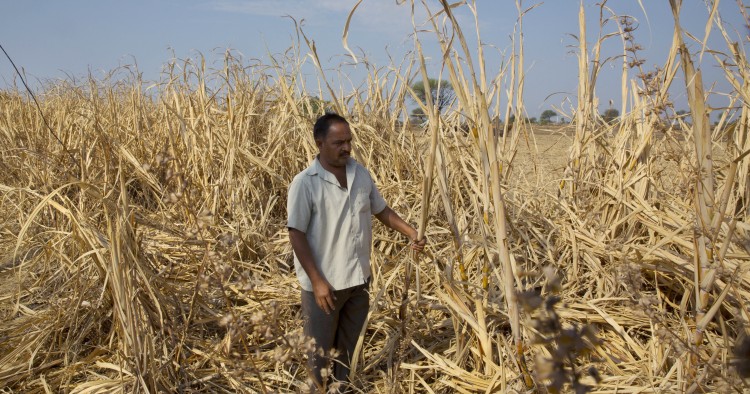 The science and technology sectors possess the knowledge and capabilities to reduce risk and build resilience in the Asia Pacific region. In fact, science and technology can play a key role in shaping the upcoming Asia Regional Plan as well as the political declaration at the Asia Ministerial Conference on Disaster Risk Reduction (AMCDRR), which will be held this November in Delhi.[1] This essay proposes several agenda items for these dialogues.

Drought risk reduction in Asia should be on the agenda. There is a need to focus more on drought hazard in the implementation of the Sendai Framework on Disaster Risk Reduction 2015-2030 (SFDRR.)[2] in Asia. The recent “Fighting Successive Droughts in India: A National Round Table Meeting” organized by Bihar State Disaster Management Authority (BSDMA.) and All India Disaster Mitigation Institute (AIDM) with ongoing support from UNICEF India also looked at the regional dimension of drought as well as the science and technology interface of policy. The participants— over 100 U.N., government, academic, scientists, civil society organizations, and others—were in agreement that there is a need for dialogue not only about what constitutes a drought, but also regarding when a drought starts and when it ends. Furthermore, such a dialogue is needed at both the national and the regional levels. The participants highlighted the need to focus on using science in order to mitigate drought and on using of technology in order to process big data on drought across years and locations. The participants also discussed the need to tackle droughts throughout the year, rather than simply during when they occur.

A second proposed agenda item is for accurate weather forecasting. Some of this forecasting has already started on heat wave hazards in the city of Ahmedabad by Indian Institute of Public Health (IIPH) and Ahmedabad Municipal Corporation (AMC) with Natural Resources Defense Council (NRDC) of the United States and support from the Climate and Development Knowledge Network (CDKN). The initiative is spreading to cities in state of Odisha and Nagpur city in state of Maharashtra in India. The ongoing weather attribution work of Indian Institute of Technology (IIT) Delhi, CDKN, and Climate Central at this stage suggests redefining the data use and communication around urban heat waves and urban floods. With available technology it is possible to more accurately attribute weather and its changes in Asia.

Some impressive progress has been made in this field, the India Meteorological Department’s satellite remote sensing technology is widely used for monitoring crops and agricultural drought assessment. Coarse resolution satellite sensors are being used routinely to monitor vegetation and detect the impact of moisture stress on vegetation.

Financing for Science and Technology Related DRR and CCA Projects

A third agenda item for dialogue is public and private financing for science- and technology-related Disaster Risk Reduction (DRR) and Climate Change Adaptation (CCA) projects. There is limited public finance going into science and technology that reduce risk and build resilience. The Government of India’s “green finance” facility under the auspices of the National Bank for Agricultural and Rural Development (NABARD) is a good example to start with. A recent event in Mumbai, “Workshop on Green Bonds for Energy Efficiency in India: Green Asset-Backed Securities (ABS) for Energy Efficiency” by the International Finance Corporation (IFC), Energy Efficiency Services Limited (EEESL), and The Energy and Resources Institute (TERI) suggested “green bonds” as a way to finance a wide range of initiatives in India beyond energy efficiency. Can similar finance be made available to science and technology initiatives? Countries such as Japan, China, and India, as well as regional bodies such as the South Asian Regional Association for Cooperation (SAARC) and the Association of Southeast Asian Nations (ASEAN) have a lot to offer in this regard.

A fourth topic that demands dialogue is child-centered disaster risk reduction. Children are not only victims but are also leaders of DRR How can children be better protected with the use of science and technology initiatives? How can science and technology be better used by children before adulthood in order to reduce risk and build resilience? These two questions are crucial in Asia as a new generation of citizens is taking over society. Good practices need to be systematically replicated to move to scale in India and throughout the region. This requires strong leadership from Government, NGOs and other partners in support of children and youth. AIDMI consultation with children and youth in Ahmedabad City in Gujarat, Guwahati in Assam, Cuddalore in Tamil Nadu, and Puri in Odisha for what is being called Children and Youth Alliance for Resilient India (CYARI) shows that with better science and technology inputs, children can play a leading role in reducing risk.

Generation and Use of Scientific Information

A fifth agenda item for dialogue is the generation and use of scientific information that goes into deciding and designing an insurance program. Risk has to be accurately assessed as was found in the initiative of Afat Vimo (disaster insurance), promoted in three locations in India under the Humanitarian Innovation Fund award. The science of understanding risk is a bit less focused on the risks women face, visualization of the risk landscape, and urban-rural distinctions. AIDMI Round Table with the Associated Chambers of Commerce and Industry of India (ASSOCHAM) on CSR and Disaster Risk Reduction in Delhi (August 10, 2016) identified the need for new technology that mitigates risks that are transferred with financial tools. Over 30 participants agreed to better science and policy coordination in order to reduce risk and build resilience.

Three key areas are suggested for the way ahead to further develop and design these dialogues in order to implement SFDRR. The dialogue in Bangkok, as mentioned above, was seen as only the beginning of ongoing, timely, and high-impact dialogues in Asia. A series of such dialogues—across regions such as South Asia and Middle East Asia—are envisaged with these three objectives in mind:

1. Scope out areas where the above five agenda items for dialogue are of key importance in strategic Asian countries such as China, India, Indonesia, and Japan as well as the Maldives, Bhutan, Fiji, and Afghanistan.

2. Find ways to convene these dialogues on a South-South basis so as build the latticework for lateral knowledge and capability exchanges around science and technology for DRR.

3. Use the Asia Ministerial Conference on Disaster Risk Reduction (AMCDRR) scheduled on November 2-5, 2016 in Delhi as a location and event to not only set the agenda for the topics mentioned above, but also exchange knowledge and capability to use science and technology for implementing SFDRR in Asia.

[1] This essay is based on a contribution to the 1st Asian Science and Technology Conference for Disaster Risk Reduction: Science-Policy Dialogue for Implementation of the Sendai Framework held in Bangkok, Thailand, August 23-24, 2016. The essay draws upon the work of All India Disaster Mitigation Institute (AIDMI) in India as well as global work of Climate and Development Knowledge Network (CDKN). It also draws upon the ongoing work on South Asia Disaster Report 2016 of Duryog Nivaran (DD) in South Asia.