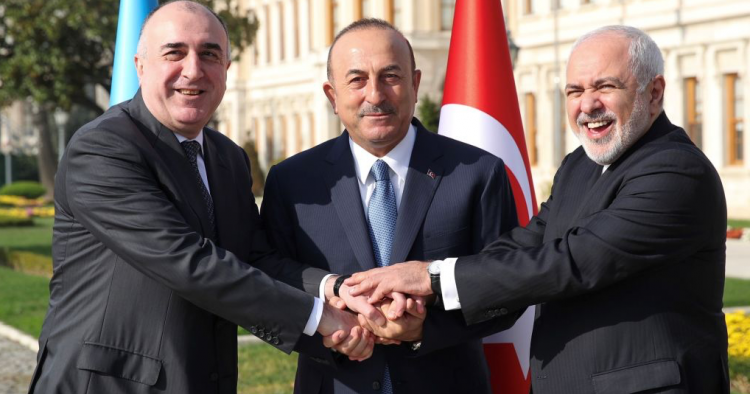 As neighboring regions, the South Caucasus and the Middle East are inextricably intertwined — so much so that the former is sometimes even considered part of the Greater Middle East. While geographical proximity is the strongest driver of interconnectivity between the two regions, geopolitics, business ties, and energy interests also link countries from the South Caucasus and the Middle East and form the basis for important bilateral and regional relationships. The connections between the two regions are diverse and wide-ranging, and both are shaped by broader regional and international politics, serving as arenas where the competing and sometimes clashing interests of larger powers play out.

Two of the major actors in the Middle East, Turkey and Iran, share borders with at least two countries in the South Caucasus. However, these same two actors also separate the rest of the Middle East from this relatively small neighboring region to the north, and they have complicated relationships with the countries on both sides, creating an added barrier to greater cooperation. This is also one of the reasons why it took some time for the countries of the Middle East and the South Caucasus to restore their ties after the latter gained independence from the Soviet Union. However, over the last decade, these ties have grown closer, driven by increasing economic activity and the movement of people between the two regions.

Of all the Middle Eastern countries, Turkey has the closest relations with both Azerbaijan and Georgia. However, its ongoing tensions with Armenia, which are linked in part to the frozen conflict between Azerbaijan and Armenia over Nagorno-Karabakh, complicate Turkey’s regional role and political relationships. Azerbaijan is Turkey’s closest ally and shares strong cultural and political ties, and it is also the main link to the energy resources of the Caspian and Central Asia. Turkey remains a major importer of oil and gas and has aspirations of becoming a regional energy hub. Yet, as a result of the conflict between Azerbaijan and Armenia, the two major oil pipelines running through the South Caucasus — the Baku-Tbilisi-Erzurum and Baku-Tbilisi-Ceyhan pipelines — curve through Georgia instead of running across Armenia, increasing the former’s importance in the context of Turkey’s regional relations.

After the dissolution of the Soviet Union, Turkey made an effort to present itself as a reliable partner to its newly independent neighbors by carefully building economic and political ties with Azerbaijan and Georgia. However, Ankara’s policies toward the South Caucasus are not formed in a vacuum and it must consider broader regional dynamics, such as Russia’s recent reemergence as a leading power in the Middle East. Although Russia’s efforts to strengthen its military presence in Armenia are largely aimed at supporting its operations in Syria, they could also be perceived as a potential threat to Azerbaijan and Turkey’s positions in the South Caucasus.

The other major regional actor active in both the Middle East and the South Caucasus is Iran, which has close connections with all three South Caucasian countries. The relationship between Iran and Azerbaijan is complicated for various reasons, including the large population of ethnic Azerbaijanis living in the Islamic Republic — far more than live in Azerbaijan itself. Energy ties between the two countries are also significant: Iran’s national oil company, NIOC, holds a 10 percent stake in Azerbaijan’s main gas field, Shah Deniz, and Azerbaijan imports small volumes of gas from Iran for local consumption in the exclave of Nakhchivan, which is geographically separated from the rest of the country. After high-ranking Iranian officials visited Baku in January 2019, talk of a new phase in Iranian-Azerbaijani relations and closer ties has intensified.

Armenia and Georgia also have connections with Iran. Due to its critical dependence on Russia, Armenia is part of a broader Armenia-Russia-Iran axis, the formation of which was “a policy response to a shifting geopolitical situation” involving Russian entrenchment, Turkish unpredictability, and divergent regional trajectories, according to a report from the Konrad-Adenauer Stiftung. As for Georgia, even though the country has clear pro-Western aspirations and maintains its distance from Russia, its relationship with Iran is not deadlocked. For example, Georgia reintroduced visa-free travel for Iranians in 2016, which increased not only the number of Iranian tourists visiting Georgia, but also the number of Iranians moving to the country.

Beyond the immediate neighborhood

Even though it has no direct territorial connection to the South Caucasus, Israel also has positive relations with the region. This is due, first of all, to its population of Georgian and Azerbaijani Jews, who have maintained close ties with their former home countries. Building on their already strong ties, Georgia and Israel are seeking to expand their cooperation in different fields, including cybersecurity, agricultural technology, and trade, launching negotiations on a free trade agreement in 2018. Israel has balanced relations with Azerbaijan as well, driven primarily by the latter’s role as an oil exporter and its geostrategic location near Iran, as well as the former’s status as a major arms exporter — in 2017 Azerbaijan was the third-largest consumer of Israeli arms. There have also been significant developments in Armenian-Israeli relations of late as well, such as the September 2019 announcement by the Israeli Foreign Ministry that Armenia will be opening an embassy in Tel Aviv.

While the Gulf states share neither territorial nor close historical links with the South Caucasus, these key Middle Eastern stakeholders have expanded their business ties with the region over the past decade. For example, Georgia has received about $1 billion from trade with the UAE and Saudi Arabia. Tourism is another major driver of closer ties with the Gulf, especially for Azerbaijan. In 2018, it eased visa procedures for citizens of the Gulf states and introduced a visa on arrival — moves that have resulted in an increasing number of Gulf tourists visiting the region.

The interests of the leading Western actors in the Middle East, particularly the U.S. and the EU, clearly go beyond narrow regional dimensions, as Iran, Turkey, and, increasingly, Russia are actively involved in shaping regional politics. Therefore, geographical proximity and newly formed connections between the two regions add another layer to the West’s political interests in the South Caucasus.

For example, the visit of then U.S. National Security Advisor John Bolton in fall 2018 confirmed that the U.S. considers the South Caucasus to be strategically important, especially with an eye to bringing the countries there on board with the “maximum pressure” campaign to isolate neighboring Iran. Russia’s increasing engagement in both the Middle East and South Caucasus, as well as its strong military presence in Armenia and growing military presence in Georgia’s occupied regions of Abkhazia and South Ossetia/Tskhinvali, remain significant causes of concern for the U.S. as well.

Even though the scale and intensity of the EU’s engagement in each of the countries in the South Caucasus is different, there are two overarching dimensions: ensuring energy security and balancing EU-Russia relations. In terms of natural resources, both the European Neighborhood Policy (ENP) and the Eastern Partnership (EaP) have a special focus on energy security, and one of the driving factors of including the South Caucasus as part of the ENP was the critical importance of the Southern Energy Corridor for the EU. The EaP also reflected the EU’s strategic goals regarding energy policy and security at large.

As for the EU-Russia relationship, it has deteriorated significantly in recent years, and the latter is a target of EU economic and financial sanctions as well as travel restrictions due to Russia’s actions in Eastern Europe and the South Caucasus. As a result, one of the goals of EU engagement is to mitigate Russian influence and strengthen the resilience and sovereignty of the countries in the region. However, there is less clarity on the EU’s position in terms of coordinating its policies in the South Caucasus and the Middle East, as well as toward the Middle East region more generally.