Traffic Accidents in Egypt: The Need for Reform 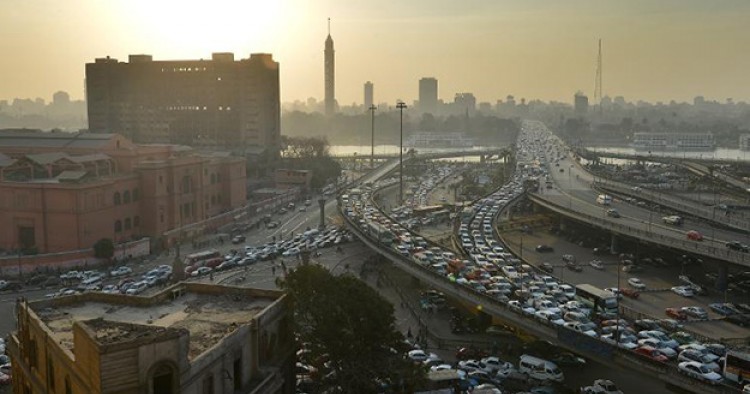 Cairo’s Ring Road, a peripheral highway linking the city’s core to surrounding districts, is an eight-lane free-for-all, with cars, buses, and overloaded trucks weaving randomly at high speeds. “I for one consider it to be an off-road, not a highway,” says Mahmoud Mostafa Kamal, editor of the online Arabic-language automotive magazine, el-Tawkeel (The Dealership). “There are parts where you can actually see [through fissures in the pavement] people walking beneath.”[1]  “It’s sort of like a video game,” said Ayman Samir, one of the drivers featured in the 2013 documentary, Cairo Drive, referring to the stream of hazards the “player” must artfully avoid.[2] Despite the growing risk involved in navigating this and Egypt’s other heavily-trafficked, poorly-maintained roads, little is being done to address the problem.

Horrific accidents make headlines with alarming frequency in Egypt. The August 22 collision of two buses near Sharm el Sheik killed at least 40 (including several foreigners). Four days later, in Luxor, the crash of two microbuses cost 19 lives, and the October 13 three-way microbus pileup near Aswan left 27 dead and 18 injured. In April of this year, the Ministry of Interior and the Ministry of Transportation issued a joint report noting that 100,000 crashes had occurred between 2008 and 2012, taking 33,000 lives, injuring 150,000, and destroying 125,000 vehicles. Along with cancer, stroke, and heart disease, traffic accidents are a leading cause of death in Egypt, which has one of the worst traffic fatality rates worldwide.[3]

Who is to blame? An April 2014 report from the Ministry of Interior’s Highway Research Department claims that human error was responsible for 76 percent of all traffic accidents since 2006. [4] But this misleading figure does not qualify the error. The main reason behind road deaths is the lack of safety features in most cars. Although accidents with safety-equipped vehicles take far fewer lives, Egypt has no law requiring things like backseat head rests (to prevent neck or back injuries), air bags, or anti-lock braking systems (ABS) and electronic stability programs (ESP) to control skids, which are standard and in some cases mandatory features in the United States and parts of Europe.

Instead, a tax is imposed on imported cars with these life-saving devices, prompting unscrupulous local importers and dealers to have them removed before shipment in order to boost their profit margins on lower-end vehicles. Mohamed Sheta, editor of Auto Arabia, a bilingual online and Arabic print outlet for consumer-related automotive industry news, cites the Chevrolet Spark as one of several examples.[5] Although offered in Germany with ABS, ESP, and six airbags, the Egyptian version lacks these features while selling at the same or a higher price. Upscale brands, like BMW and Mercedes Benz, come equipped with these and even more sophisticated features.

An outspoken advocate for road safety and frequent television talk show guest, Sheta also hosts a weekly call-in radio program addressing consumer and road safety issues that attracts tens of thousands of listeners nationwide.[6]  Having compiled a comprehensive list of the factors contributing to Egypt’s fatality rates and outlined measures to address them, he claims that, official statistics aside, “Everyone is to blame—the state and private sector stakeholders along with Egyptian drivers themselves.”[7]

In addition to the lack of safety features, Sheta maintains that most vehicles are potentially hazardous due to worn tires, brakes, and shock absorbers. Egypt has no system to regularly test vehicles’ road worthiness, nor do laws prohibit the import of junk trucks from Europe, where they are forbidden to circulate. In countries with lax regulations like Egypt, these European trucks with 600,000-1,000,000 kilometers on the odometer are, according to Sheta, “pimped up” and sold as merely “used.” Roads are also in poor condition. The World Bank estimates the cost of road maintenance in Egypt at around $700 million per year, but with only $70 million allotted, each kilometer will be serviced just three times per century.[8]

Poorly qualified, reckless drivers complete the deadly equation. Obtaining a license in Egypt requires more ability to navigate the bureaucracy than any vehicle and is no indication of a driver’s competence. Those who can afford to grease the wheels with baksheesh are known to send factotums to obtain licenses in their stead. Talking on cell phones, eating, drinking, and changing money (for passengers in commercial vehicles) while driving are common behaviors. Entire families ride a single motorcycle, the children pressed between their father, who straddles the gas tank, and their mother, perched sidesaddle on the back rack often with another babe in arms. Helmets are mandatory (for drivers only) as are seatbelts for car passengers, but these regulations, like speed limits, are rarely enforced.

Around six million vehicles are registered in Egypt (not counting motorcycles and tuk-tuks, three-wheeled vehicles with a passenger compartment). Although roughly half of the population of around 80 million is old enough to drive (18 years) only 12 percent own cars.[9]  Most average citizens are obliged to use cheap, overcrowded public transport, particularly privately owned and operated microbuses, whose routes supplement skeletal metro and bus lines. Acquiring a commercial driving license requires only the usual, substandard driving test and medical certificates affirming the applicant is neither disabled nor blind. Most drivers, commercial or otherwise, have little or no car insurance. In the absence of laws assigning responsibility for accidents, issues of culpability are settled out of court and there are no legal precedents for charging the state, drivers, automobile manufacturers, or importers with criminal negligence.

The response to Mohamed Sheta’s repeated calls for the immediate removal of customs duties and the standardization of safety devices, vehicle inspections, license testing reform, mandatory training for commercial drivers, and road safety public awareness campaigns, has been “indifferent.” “It’s a matter of attitude,” he says, perplexed. “The main stakeholders are not working for their core interests.”[10]

Yet there are signs that attitudes may be changing as road safety becomes a global issue. Traffic fatalities will soon be a leading cause of death worldwide. In 2011, the United Nations launched its Decade of Action to reduce road deaths by 2020. The World Health Organization’s Global Status Report on Road Safety (2013), stating that low and middle income countries like Egypt account for just 48 percent of the world’s vehicles but 90 percent of annual road deaths, suggests that these countries face similar social, legislative, and institutional challenges.[11]

Poorer countries are also “disproportionately affected” by road traffic injuries and fatalities, which place undue pressure on inadequate health systems and on victims and their families, but also on society, since half of those who die or are disabled are young adults, its most productive segment.[12] The World Bank estimates the cumulative cost of Egypt’s traffic fatalities at $7 billion.[13]

Not all Egyptians are aware that the technologies that can save their lives are placed beyond their reach. But according to Maged Kamal, a salesperson at Al Masria Auto Dealers in downtown Cairo, people are starting to ask questions and consider safety features in their purchase despite the significant additional expense.[14] “Before they only cared about getting the lowest price, but now they’re afraid, there are too many accidents [to ignore],” he says. These highly publicized tragedies may serve as life-saving cautionary tales, but they also reinforce Egypt’s reputation as an unsafe place to work and travel. In 2012, the Ministry of Tourism established a Road Safety Training Center for the sector’s commercial drivers. Shell and Lafarge Cement, who operate major facilities in Egypt, have invested in road safety programs as part of their corporate social responsibility portfolios, but local automotive industry members have not.

On November 2, 11 students died in a collision between their bus and a truck in Sohag. On November 5, at least 18 more children died while trapped in a burning school bus following a pileup involving two trucks and several cars near the Nile Delta town of Beheira.[15] That same day Egypt’s president, Abdul-Fattah el-Sisi, instructed the Specialized Council for Community Development, affiliated with the presidency, to “formulate a comprehensive vision to prevent road accidents through the organization of working groups that will include road experts and researchers from the field in coordination with the competent state authorities.”[16] The council was advised to present a report.

Hopefully they will recommend the comprehensive traffic safety plan that Egypt so desperately needs, involving the half dozen ministries concerned in addition to the agencies regulating the automotive industry. Such wide-ranging cooperative efforts are not Egypt’s forte, owing to a convoluted bureaucracy in which areas of responsibility overlap and follow-through on decision making is never a prompt or straightforward process. But an index of a government’s competency is its ability to effectively allocate resources, and Egyptians are growing wary of the lack of action to safeguard their health and well being. The current government has repeatedly stated its commitment to security, to protecting Egyptians, and to also protecting the nation’s economy. Making Egypt’s roads safe would go a long way toward achieving these objectives.

The Hepatitis C epidemic in Egypt is another instance of a public health problem that could be alleviated via coordinated action by the state. To read about this issue, click here.

[2] Directed by Sherief Elkatsha, Cairo Drive was named “Best Documentary from the Arab World” at the 2013 Abu Dhabi Film Festival.

[3] According to WHO, India has the highest number of road deaths followed by China and the United States. Egypt ranks in the top ten for the concentration of road deaths—41.6 per 100,000 citizens in 2009—and an estimated 12,000 annually. The World Health Organization, “Global Status Report on Road Safety 2013,” http://www.who.int/violence_injury_prevention/road_safety_status/2013/en/.

[4] These and joint report figures from Zeinab El-Gundy, ”Lost Highway: Death on the Road in Egypt,” Ahram Online, April 24, 2014, http://english.ahram.org.eg/NewsContentPrint/1/0/99583/Egypt/0/Lost-highway-Death-on-the-road-in-Egypt.aspx.

[7] “Road Safety in Egypt: How Can We Solve Our Traffic and Accident Problems?” Interview with Sheta conducted by Farida Helmy, Egypt Today, March and June 2012, www.autoarabia.org.

[12] Bloomberg Philanthropies contributed to the UN effort with “Road Safety 10” (RS10), which focuses on high risk countries. In Egypt, 24 speed cameras were installed along the Ring Road. See http://mikebloomberg.com/Bloomberg_Philanthropies_Leading_the_Worldwide_Movement_to_Improve_Road_Safety.pdf.

[14] A manual drive Hyundai Verna with only back rests costs 20 percent less than a Renault Logan with two air bags, ABS, and other safety features.

[16] November 5, 2014 statement emailed to members of the press by Presidential Spokesman Mohamed Moussa entitled ‘The Presidency of the Republic Mourns the Martyrs of Beheira Crash.”