Turkey and the Kurds: From Predicament to Opportunity 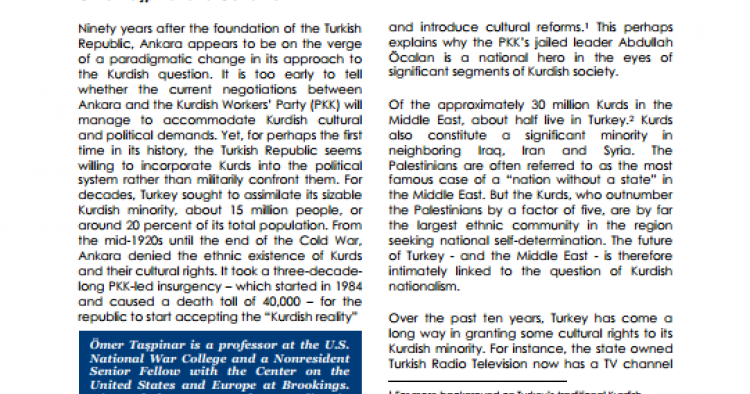 This report was co-authored by Ömer Taşpınar and was published by the Center on the United States and Europe at the Brookings Institution on Jan. 22, 2014. Click here to download the full report as a PDF.

Ninety years after the foundation of the Turkish Republic, Ankara appears to be on the verge of a paradigmatic change in its approach to the Kurdish question. It is too early to tell whether the current negotiations between Ankara and the Kurdish Workers’ Party (PKK) will manage to accommodate Kurdish cultural and political demands. Yet, for perhaps the first time in its history, the Turkish Republic seems willing to incorporate Kurds into the political system rather than militarily confront them. For decades, Turkey sought to assimilate its sizable Kurdish minority, about 15 million people, or around 20 percent of its total population. From the mid-1920s until the end of the Cold War, Ankara denied the ethnic existence of Kurds and their cultural rights. It took a three-decade-long PKK-led insurgency – which started in 1984 and caused a death toll of 40,000 – for the republic to start accepting the “Kurdish reality” and introduce cultural reforms. This perhaps explains why the PKK’s jailed leader Abdullah Öcalan is a national hero in the eyes of significant segments of Kurdish society.

Of the approximately 30 million Kurds in the Middle East, about half live in Turkey. Kurds also constitute a significant minority in neighboring Iraq, Iran and Syria. The Palestinians are often referred to as the most famous case of a “nation without a state” in the Middle East. But the Kurds, who outnumber the Palestinians by a factor of five, are by far the largest ethnic community in the region seeking national self-determination. The future of Turkey - and the Middle East - is therefore intimately linked to the question of Kurdish nationalism.

Ömer Taşpinar is a professor at the U.S. National War College and a Nonresident Senior Fellow with the Center on the United States and Europe at Brookings. His work focuses on Turkey, Muslims in Europe, political Islam, the Middle East and Kurdish nationalism.

Gönül Tol is the founding director of the Middle East Institute’s Center for Turkish Studies. She is also an adjunct professor at George Washington University. Her expertise is in political Islam, Islamist movements, immigration, ethnic and religious identity formation, and the role of identity in foreign policy making.