Turkey at a Crossroads 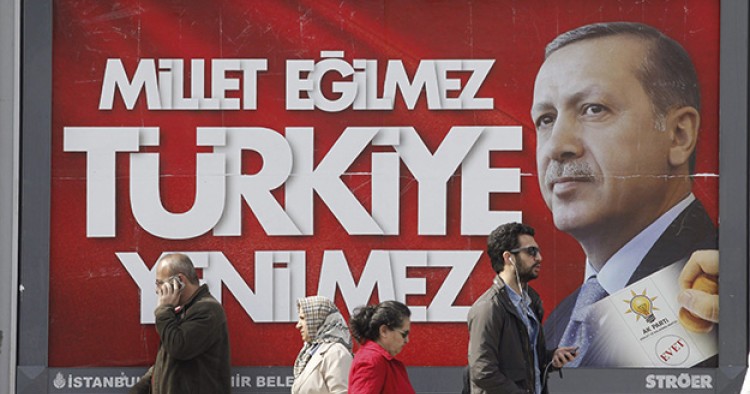 Turkish Prime Minister Recep Tayyip Erdogan secured his eighth big win in 14 years when his ruling AK Party won over 45 percent of the vote in local elections on March 30. After facing down corruption charges, mass protests, and accusations of authoritarianism, Erdogan may feel emboldened to run for president in Turkey's first direct presidential election in August. Gonul Tol, Director of MEI's Center for Turkish Studies, answers the most pressing questions on the upcoming election, the role of the Kurds, and implications for Turkey's relations with the EU and the United States.

If Erdogan runs, will he win?

Erdogan’s bid for the presidency would face several domestic challenges. In a direct vote, he would have to win 50 percent in a country that is deeply polarized over his rule. His ruling AK Party secured support of around 45 percent nationwide in municipal elections. For a comfortable win, he would need the support of Turkey’s Kurds, who account for around a fifth of the population.

Will the Kurds throw their support behind Erdogan even if he does not address their demands?

They might. Erdogan launched a peace process with Kurdish leader Abdullah Ocalan in 2012 to try to end a three-decade insurgency that has killed 40,000 people. The PKK declared a ceasefire in 2013 as part of the deal and started withdrawing its forces from Turkish territory. But the PKK halted the withdrawal to bases in northern Iraq last summer, complaining of a lack of progress in the process. The government has not held up its end of the bargain to carry out the reforms for which Kurds have been asking, and there is no indication that Erdogan will do so in the near future given his preoccupation with the upcoming presidential election and general elections in 2015.  Turkey’s Kurds thus face a dilemma. On the one hand, a strong Erdogan remains their best bet. The ultra-nationalist party MHP and the main opposition party CHP join the Gulen movement in its reservations regarding Kurdish demands. On the other hand, a strong Erdogan will try to further consolidate his power. How can the Kurds realize their dream of decentralization with a leader who wants to centralize power?

Will the PKK hold the ceasefire despite problems in the peace process?

It is likely. While there has been sporadic violence in recent months, the PKK seems to have changed its strategy and is focusing more on the political process. The PKK has made important gains in Syria and does not want to lose them. Breaking the ceasefire would require shifting forces from Syria to Turkey, and the PKK would be stretched thin as a result.

What are other potential problems for Erdogan’s rule?

The political row simmering between Erdogan and his former ally, preacher Fethullah Gulen and his Islamic Gulen movement, might be a challenge for Erdogan. While the fray between the two did not deal a blow to Erdogan’s rule in local elections, as Gulen could not mobilize his base against the prime minister, that might change. The rift may therefore have an effect on a gamut of issues, from the “Kurdish opening” to the upcoming presidential and general elections.

What are the implications of these dynamics for Turkey’s relationship with the EU and the United States?

The EU was critical of Erdogan’s intervention in the judiciary and disapproves of the lack of press freedom and other breaches of democracy taking place in Turkey today. These issues could strain relations with the United States as well. Also, Erdogan recently asked Obama to extradite Gulen, who is in self-exile in Pennsylvania. Gulen is in the United States legally, and the Obama administration likely does not want to get involved in the AKP-Gulen fight. So it is unlikely that the United States will extradite him, which could become a point of contention.

5th Annual Conference on Turkey
The Center for Turkish Studies will host a free, all-day conference in DC on Monday, June 16, featuring leading experts on the future of Turkish democracy, the domestic political landscape, and Turkey's foreign policy.
Learn more and register here.