Tweeting Terrorist Attacks in the U.S. and Europe 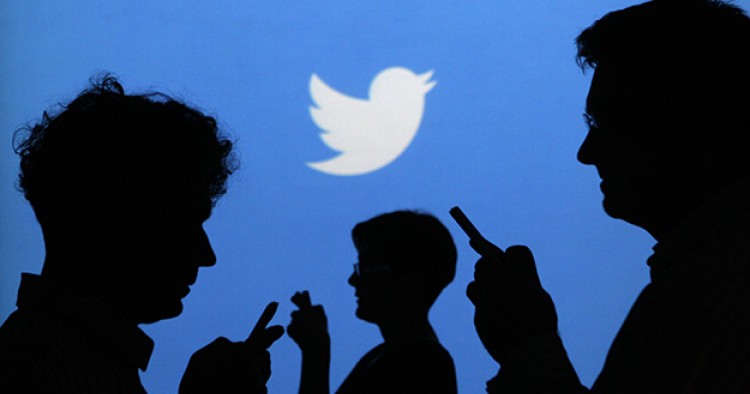 Social globalization has brought groups with different values and worldviews into contact with each other—in a physical and institutional sense to be sure, but also in the sense that the international exchange of ideas, information, and images has increased. This exchange occurs in both directions; American readers can reflect on the fervor in U.S. media over the Arab Spring protests, while those from the Middle East can consider the waves that pop culture or even domestic political events in the United States, such as presidential elections, make in the Arabic and English discourses in the region.

The rise of social media has provided a public venue for this exchange. An event occurs across the Atlantic, and a Middle East audience is familiar with the event, and is tweeting about it, before the dust even settles. These reactions come within a context of strong anti-American sentiment in the Middle East. Public opinion surveys such as Pew Global Attitudes and the Arabarometer surveys have consistently demonstrated the prevalence of negative sentiments toward the United States, although those sentiments are mostly focused on particular issues such as the global spread of U.S. values and institutions, the war on terror, and U.S. support for Israel.

With this discourse in mind, it is fruitful to explore the reactions on social media to “attack” events, that is, the perpetration or attempted perpetration of a terrorist attack or execution. These attacks figure prominently in the online discourse about the United States, and are interesting as a result. In the wake of such an attack, both English and Arabic social media content contain condemnations of the attack and expressions of support for the victims. But those are not necessarily the only, or even the predominant, reaction. The reactions to such an event can depend on many factors—the national identity of the target and perpetrator and the type of attack, to name only two.

In our March 2015 paper in Perspectives on Politics, we use text analysis to examine the responses of Twitter participants writing in Arabic to several key events during 2012–2013. These events include the Boston Marathon bombing of April 2013 and the murder of British Army soldier Lee Rigby, two attack events in which Arab or Muslim perpetrator(s) attack a U.S. or Western target.

We looked at these events because, given the overall negativity of traffic about the United States, we wanted to see how much sympathy there would be for the victims of these attacks. In particular, we were curious whether there would be more sympathy in reaction to the London attack—against a non-U.S. but Western target—than to the Boston bombings. We did find such a difference: Sympathy for victims composed 60 percent of the traffic regarding London but less than 10 percent for Boston, and while there were few to no conspiracy theories implicating the target in the London attack, such tweets comprised 15 percent of the traffic about the Boston bombings (see Figure 1). In addition, while Arabic tweeters expressed concern for the safety of Arabs and Muslims in both cases, in Boston many posts (40 percent) argued that the attention given to the attack was undeserved and hypocritical. However, this being a single case, it is difficult to draw broad conclusions to other non-U.S. but Western attacks. 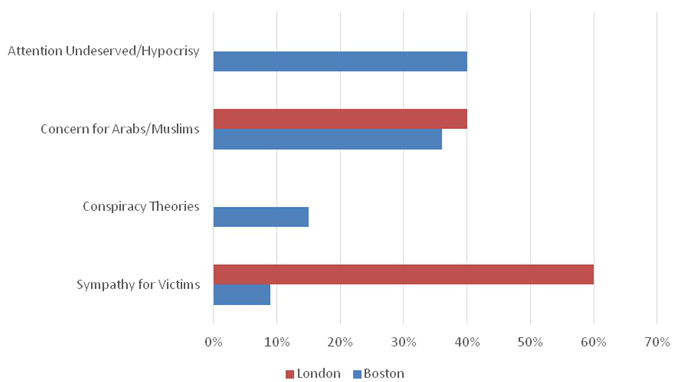 The universe of such attack events has since grown. Several other attacks against Western targets (for example, the Charlie Hebdo attacks in January 2015) as well as prominent attacks against Arab and Muslim targets (for instance, ISIS’s execution of a group of Egyptian Copts in February 2015) have allowed us to return to this question and delve into related ones. While still interested in how whether the target is American affects reactions to the attack, we have also started to explore how the geographical, cultural, and political proximity of the target to the Arab world might affect the Arabic Twitter universe’s reactions. In a current project, we are examining a number of such events, but in this report we focus on comparing our analysis of reactions to the Boston bombings with reactions to the Charlie Hebdo attack.

Similar to London, the Charlie Hebdo attack targeted a Western but non-U.S. target, and we expected to find more sympathy for the victims (in comparison to Boston) as a result. However, Charlie Hebdo is also famous for its strident criticism of Islam, so we expected to see disapproval of its treatment of Islam in reactions as well. Indeed, we found reactions that matched both of these expectations. Similar to Boston, we found tweets matching all four of the categories in Figure 1:

Attention Undeserved/Hypocrisy – “A Norwegian Christian who hates Islam killed 92 people in Norway in 2011, but #alarabiyya didn’t call it terrorism, like it did for Charlie Hebdo!”

Concern for Arabs/Muslims – “Approximately 50 assaults against Muslims in France since the attacks on Charlie Hebdo.”

Conspiracy Theories – “It wasn’t me, nor was it our Arab or Islamic media, who revealed that the criminal Jewish Rothschild family had gained possession of the Charlie [Hebdo] paper just one month before the attack—it was Westerners.”

Sympathy for Victims – “A Muslim Frenchwoman distributes flowers at the site of the paper #Charlie_Hebdo, the same spot where the armed attack occurred. Islam’s tolerance in picture.”

Looking at the numbers (see Figure 2) we find that, similar to our comparison between the London and Boston attacks, tweeters expressed more sympathy for the victims of the Charlie Hebdo attack (26 percent) than for those of the Boston Marathon bombings (9 percent). Those tweeting about Charlie Hebdo were also less likely to mention conspiracy theories implicating the target in the attacks—5 percent compared to Boston’s 15 percent. Twenty-two percent of the traffic about Charlie Hebdo (compared to 40 percent for Boston) argued that the attention the event was getting and the way it was being covered was hypocritical. 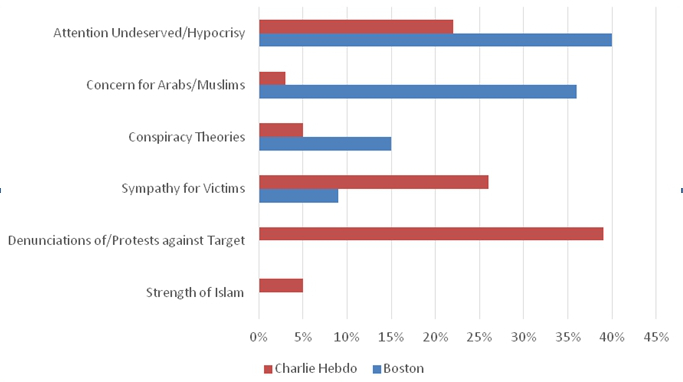 But the most interesting differences were the two negative responses unique to Charlie Hebdo: Those denouncing the target (39 percent) and those arguing that Islam was stronger than and would overcome—even benefit from—the reactions that the attack engendered (5 percent):

Denunciations of/Protests against Target – “I am not for the terrorist [attack] that occurred with #Charlie_Hebdo, but I think that the paper was a partner in what occurred. It provoked Muslims through its continued assault against their religion.”

Strength of Islam – “Sales of the Qur’an in Paris rise after the assault on #Charlie_Hebdo, in an effort to understand more about #Islam.”

As is illustrated in the results above, the Charlie Hebdo attack elicited more positive traffic than the Boston bombings, but negative attitudes toward the French target still featured prominently in the conversation. How should we interpret these results? Interpretations at this point are preliminary; we are still working through verifying our results, which may change somewhat based on that process, and the inclusion of the analysis of other events will broaden the generalizability of our findings. However, our current interpretation, based on our previous findings about anti-Americanism in the Arabic Twitter universe, is that a high level of U.S. political intervention in the Middle East is a likely factor in the lack of sympathy and positive expressions toward the targets in the Boston bombings. But, looking closely at how the negative traffic breaks down in Charlie Hebdo, we see that more than political intervention drives reactions. For Charlie Hebdo, it is also the target’s relationship with Islam that forms an important basis of negative traffic in reaction to the event. Looking at other events as we continue this project will determine to what extent these conclusions generalize and what other conclusions can be drawn.

The Secular-Islamist Divide Deepens in Jordan