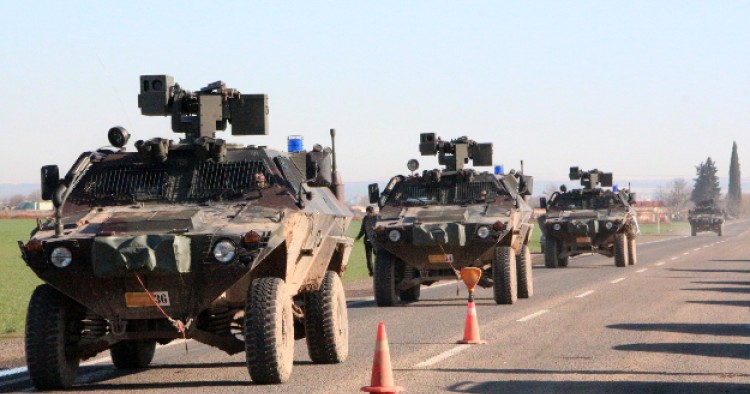 The United States has been pushing Turkey for a campaign to eject ISIS from a 60-mile stretch of border that it still controls between the Syrian towns of Jarabulus and Azaz. However, the joint U.S.-Turkey operation has faced several roadblocks. From the outset, the United States and Turkey have had different goals. Washington wants Ankara to close the border, which is the sole remaining crossing point for ISIS militants. Turkey, however, has been pushing the United States to establish a safe zone in the area, which could be used to relocate Syrian refugees and as a base for the opposition—something the Obama administration has been reluctant to endorse.

The operation has also become a flashpoint for Turkish anxieties about the Syrian Kurds. The border strip lies between Kurdish-controlled territories. Ankara fears that the Kurds, who have become one of Washington’s favored partners on the ground in Syria, will link this area to its territory in the east and west. If linked, the territory would give them control over a large, contiguous stretch of the Syrian border with Turkey, and enhance their push for greater autonomy. Thus, despite mounting U.S. pressure, Ankara has been dragging its feet on the campaign.

The ISIS-led attack in Brussels has given new urgency to the joint U.S.-Turkey operation to clear the last section of the border, which represents a major crossing point for foreign fighters entering Europe. According to some sources I spoke with who wished to remain anonymous, the long-planned campaign was the number one item on the agenda of President Recep Tayyip Erdogan’s meetings with the U.S. administration during his early April visit to Washington. Erdogan reiterated Turkey’s opposition to a P.Y.D.-controlled autonomous region along its southern border, and a U.S.-P.Y.D. cooperation that might enable such scenario. Erdogan may not have convinced the U.S. administration to stop working with the P.Y.D., but the two sides seem to have found a middle ground.

According to the new plan, the Free Syrian Army will take the 12-mile deep border strip from ISIS and the United States will provide air support to the F.S.A. offensives. The P.Y.D. will retake Manbij, which lies at the southeastern end of the 60-mile ISIS-controlled portion of the border, and serves as a major stronghold for the jihadists. The United States has apparently asked for Turkey’s support in the Manbij operation. Reportedly, Erdogan has voiced two demands before throwing its support to the Manbij offensive. Ankara wants the Syrian Arab tribes operating under the P.Y.D.-controlled Syrian Democratic Forces (S.D.F.), which will take part in the offensive, to leave the S.D.F. umbrella and undergo “background checks.”[1] Turkey also demanded the United States increase its support, and airstrikes, for the Turkey-backed Free Syrian Army at Marea, which is located on the southwestern end of the 60-mile border.[2]

Turkmen sources say the most recent dynamics on the ground indicate the parties have already started executing the plan. Kurdish-led Syrian Democratic Forces have recently established a military council to retake Manbij from ISIS. The S.D.F. also created a civilian council to establish a working transitional governance structure for areas liberated from ISIS. To support the Kurdish offensive, the United States has been conducting airstrikes near Manbij. Local sources report that the U.S. helicopters in the Rmeilan air base, in the Kurdish-controlled northern Syria, have recently provided weapons and ammunition to the S.D.F.[3]

The United States has also been providing air support to the Free Syrian Army operations against ISIS around Marea and in northern Aleppo. Several days ago, the F.S.A., with the help of Turkish artillery and U.S. air cover, won back the strategic border town of Cobanbey, located on the border with Turkey, in the triangle between Jarabulus, Azaz, and al-Bab. According to Ziyad Hassan, vice president of the Turkmen National Action Party, which was established by Syrian Turkmens in Turkey, the F.S.A. could not have secured such a victory without U.S. air support.

Could this middle ground finally remove a major contention point in U.S.-Turkey ties? It is highly unlikely for the Arab tribes under the umbrella of the S.D.F. to leave the Kurdish-led group as requested by Ankara. To the dismay of Turkey, the P.Y.D. will play an important role in the Manbij offensive, and the United States fully supports the P.Y.D.’s role. Ankara might still live with this if the P.Y.D. stops at Manbij after retaking the town from ISIS. The F.S.A.’s potential control of the border strip between Azaz and Jarabulus is likely to allay Turkey’s fear of P.Y.D. domination along its southern border. However, if the P.Y.D. further advances westward, after retaking Manbij, in an attempt to link up the Kurdish territories, U.S.-Turkey tension will be revived. Many fear that this is indeed what the P.Y.D. has in mind. How sustainable an autonomous Kurdish region with an F.S.A.-controlled pocket in the north would be is not certain, but a P.Y.D. move toward the west, after Manbij, is enough to ruffle Ankara’s feathers and strain U.S.-Turkey ties further.