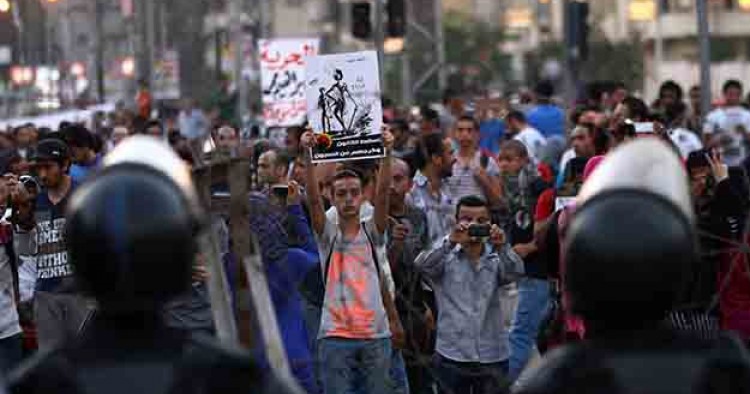 Article 73 of the constitution states in its first paragraph, “Citizens shall have the right to organize public meetings, marches, demonstrations and all forms of peaceful protests, without carrying arms of any kind, by serving a notification as regulated by Law.”

The Protest Law, enacted by decree in 2013 (ironically, signed by the S.C.C.’s former chief justice, Adly Mansour, then serving as interim president), requires not only advance notification to the police of planned public demonstrations, but also prior police approval. According to the law, organizers who fail to provide advance notice are subject to stiff fines, and participants who disrupt public order, block traffic, or threaten public safety are subject to two-to-five years imprisonment. Since its enactment, thousands of people have been arrested for engaging in unauthorized protest activity.

The S.C.C. upheld the constitutionality of the Protest Law’s provisions requiring demonstration organizers to provide advance notice to the police, as well as its penalty provisions, but struck down as unconstitutional the provision giving the police or other security services authority to unilaterally ban demonstrations. The court ruled that the police and other security services may not interfere with the people’s exercise of their constitutional right to hold peaceful demonstrations, including exercising that right in an effective manner, without first applying for and receiving court authorization to intervene.

At the time of its enactment, Egyptian officials repeatedly claimed that their Protest Law was patterned after the laws of several European countries and the United States. In reality, to use the analogy of manufacturing automobiles, while the Egyptian model may have borne a superficial resemblance to those of other countries, the Egyptian model lacked brakes. (For a detailed comparison of Egypt’s protest law with those of other countries, see this analysis and accompanying chart.) Now, the S.C.C. has added a judicial brake. Whether individual judges will be willing to apply those brakes by acting as an effective check on police and security services seeking to prevent public protest activity remains to be seen, may vary from court to court, and may evolve over time.

At the very least, however, police intervention in protest demonstrations of which they receive advance notice will require the additional step and resulting delay of seeking prior judicial authorization. It will also be subject to judicial review on appeal, and require the making of a record of reasons stated by the police to justify such intervention.

An unanswered question is whether protest demonstration organizers will now comply with the notice requirements of the Protest Law, a step most have ignored in the past. Failure to comply with the notice requirement of the Protest Law upheld by the S.C.C. means it is unlikely the court’s ruling will provide any new legal basis to challenge most prior arrests or convictions.

The most significant practical effect of the S.C.C.’s ruling, therefore, may be that it puts the government on notice that the court takes the rights granted to the people in the 2014 constitution seriously, and is willing to step in when necessary to defend them from government overreach.

The next big constitutional test for the Egyptian government may well be whether its NGO laws, present and future, comply with Article 75 of the 2014 constitution, which states: “Citizens have the right to form non-governmental organizations and institutions on a democratic basis, which shall acquire legal personality upon notification. They shall be allowed to engage in activities freely. Administrative agencies shall not interfere in the affairs of such organizations, dissolve them, their board of directors, or their board of trustees except by a judicial ruling.”