Confronting the Islamic State in Iraq and Syria: Challenges and Options 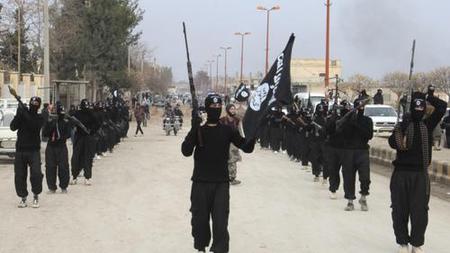 The Middle East Institute and the Conflict Management Program at the Johns Hopkins School of Advanced International Studies hosted a panel discussion on the status of the Islamic State and what Iraq, the United States, and other regional actors must do to confront the rise of the self-proclaimed caliphate. The panel included MEI's Richard A. Clarke, Steven Simon, Randa Slim, and Daniel Serwer, as well as Iraq analyst Omar Al-Nidawi.

Randa Slim, who was in Tehran two days after the Islamic State’s takeover of Mosul in June, discussed reaction to ISIS’s advance within the Shi’a communities of Iraq and Iran. According to Slim, Iranian officials view the Islamic State as part of a broad Sunni-extremist conspiracy to undermine Iran’s political status in the region by taking down its closest allies, the regimes of Syria and Iraq. There is a belief in Tehran that the United States is involved in this conspiracy, along with the Saudis, Qataris, and others, Slim said.

Iranian officials seem to have reached a consensus that cooperation with the United States in combating the Islamic State is unlikely, Slim added. But both Tehran and Washington have made clear the need for a political solution in Baghdad.

Support for Prime Minister Nouri al-Maliki remains high within Iraq’s Shi’a communities, and may have even risen in the wake of the Islamic State’s advance. But Slim said the recent remarks by Grand Ayatollah Ali al-Sistani that Iraq needs an inclusive, unity government were a “clear and public intervention against a Maliki third [term]” and a “heavy blow” to Maliki’s viability.

“There has been a game-changer with Sistani’s position,” she said. “Sistani has the moral gravitas and the political gravitas, not only in Iraq but in Iran and the rest of the Shi’ite world.”

Unlike Iran’s hardline support for Bashar al-Assad in Syria, its support for Maliki is less unwielding because of Tehran’s deep connections to other, more viable Shia leaders in Iraq, Slim said.

Omar Al-Nidawi, an Iraqi native, and the director for Iraq at the consulting firm Gryphon Partners, LLC, said a successful political resolution in Baghdad would require not only government reform, but a positive response by the “deeply fragmented” Sunni community. While some Sunni groups are dedicated to the Islamic State’s mission of establishing a “seventh-century caliphate,” Nidawi said, others are only interested in using military action to restore Sunni dominance in Baghdad or carve out a semi-autonomous region elsewhere; a small number of Sunni groups are still open to peaceful political reconciliation.

Nidawi said unity among Sunni factions is hard to come by because, unlike Shias, they lack a central religious authority, and they must balance the different interests of the regional powers that back them from all over the Middle East and North Africa.

Changes in Baghdad would go a long way towards rallying and unifying Sunni support, Nidawi said, like de-politicization of the military, increased revenue-sharing, greater local autonomy, and, most importantly, the formation of a new government by someone other than Maliki. For its part, he added, the United States can try to convince local and regional forces to agree on a common denominator, like defeating the Islamic State.

“No force can take back Mosul unless it is supported by the locals,” Nidawi said. “There are thousands of Sunni men of fighting age...who have lost faith in the government, but they also don’t like [the Islamic State]. They could be persuaded to form new fighting elements that could open new fronts against IS and continue the pressure on them.”

Clarke said American officials have to be modest about their ability to affect anything in the region. Despite trillions of dollars spent and thousands of lives lost in Iraq, the United States has largely been unable to dictate events there.

According to Simon, the United States should focus on specific issues it can control, rather than searching for a solution to the situation as a whole. Simon and Clarke agreed that counterterrorism-- preventing the establishment of a terrorist Islamic State between Syria and Iraq-- is the most serious and most practical U.S. objective.

To gain a firmer grip in the region, Clarke said, the United States could try to build better relationships with Sunni groups in Iraq, consider allowing and working with an independent Kurdistan, or provide serious support to Syrian rebels. Meanwhile, he said, Iran’s influence in the region continues to grow.

“We’re tempted to say, ‘My two enemies are fighting each other--why don’t I step back and watch?’” Clarke said. “That is tempting, but I think ultimately it’s not a great idea because of the resulting Iranian influence.”

Richard A. Clarke is chairman of the board of governors of The Middle East Institute. He served for thirty years in U.S. government national security agencies, including the Pentagon, the State Department, and the White House National Security Council. In the Reagan administration, he was deputy assistant secretary for intelligence. In the Bush (41) Administration, he was assistant secretary of state for politico-military affairs. During an unprecedented ten consecutive years with the NSC, Mr. Clarke served as special assistant to the president for global affairs, senior director for transnational threats, national coordinator for counter-terrorism, and special advisor to the president for cyber security. Since leaving government, he has taught five years at Harvard’s Kennedy School of Government, served as an on air consultant for ABC News for nine years, and managed Good Harbor Consulting for a decade. During that time, he has published six books, including the New York Times #1 best seller, Against All Enemies: Inside America’s War on Terror (Simon and Schuster, 2004) and his most recent novel, Sting of the Drone (Thomas Dunne Books, 2014). Mr. Clarke also serves on other boards, including Khalifa University in Abu Dhabi and several US information technology security companies.

Omar Al-Nidawi is the director for Iraq at Gryphon Partners, LLC. He works on the company’s consulting engagements with a focus on Iraq, energy, and the Middle East. Mr. Al-Nidawi is a highly regarded Iraq analyst and co-author of the award winning blog, Iraq the Model. In his native Iraq, Mr. Al-Nidawi was a pioneer of Internet journalism and a strong advocate for freedom of expression, earning recognition by World PC Magazine in 2007 as one of the “50 most important people on the web.” He is the author of numerous articles and reports on Iraq and is frequently published in the Wall Street Journal and other major newspapers. He is fluent in Arabic. He earned his B.S. from Baghdad University and his M.A. from Columbia University’s School of International and Public Affairs.

Steven Simon is a senior fellow at The Middle East Institute.  He previously served as senior director for Middle Eastern and North African affairs at the White House from 2011-2012. He applied his extensive expertise on national security and terrorism as executive director of the International Institute for Strategic Studies (IISS-US) and corresponding director of IISS-Middle East. He was also previously a Hasib J. Sabbagh senior fellow in Middle Eastern Studies at the Council on Foreign Relations and an adjunct professor of security studies at Georgetown University.

Randa Slim is director of the Initiative for Track II Dialogues at The Middle East Institute and a non-resident fellow at the Johns Hopkins School of Advanced International Studies' Foreign Policy Institute. A former vice president of the International Institute for Sustained Dialogue, Slim has been a senior program advisor at the Rockefeller Brothers Fund, a guest scholar at the United States Institute of Peace, and a program officer at the Kettering Foundation. A long-term practitioner of Track II dialogue and peace-building processes in the Middle East and Central Asia, she co-founded in 2007 the Arab Network for the Study of Democracy, a group of academics and civil society activists from eight Arab countries. She is a member of the advisory committee of the Rockefeller Brothers Fund's Peacebuilding program and a member of the board of the Project on Middle East Democracy. The author of several studies, book chapters, and articles on conflict management, post-conflict peacebuilding, and Middle East politics, she is completing a book manuscript about Hezbollah.

Daniel Serwer is a senior research professor of conflict management, as well as a senior fellow at the Center for Transatlantic Relations, at the Johns Hopkins School of Advanced International Studies. Formerly vice president for Centers of Peacebuilding Innovation at the United States Institute of Peace (2009-10), he led teams there working on rule of law, religion, economics, media, technology, security sector governance and gender.  He was also vice president for peace and stability operations at USIP (1998-2009), where he led its peacebuilding work in Iraq, Afghanistan, Sudan and the Balkans and served as Executive Director of the Hamilton/Baker Iraq Study Group.  Serwer has worked on preventing inter-ethnic and sectarian conflict in Iraq and has facilitated dialogue between Serbs and Albanians in the Balkans. Serwer was a minister-counselor at the Department of State, serving from 1994 to 1996 as U.S. special envoy and coordinator for the Bosnian Federation, mediating between Croats and Muslims and negotiating the first agreement reached at the Dayton peace talks. From 1990 to 1993, he was deputy chief of mission and chargé d’affaires at the U.S. Embassy in Rome, where he led a major diplomatic mission through the end of the Cold War and the first Gulf War.