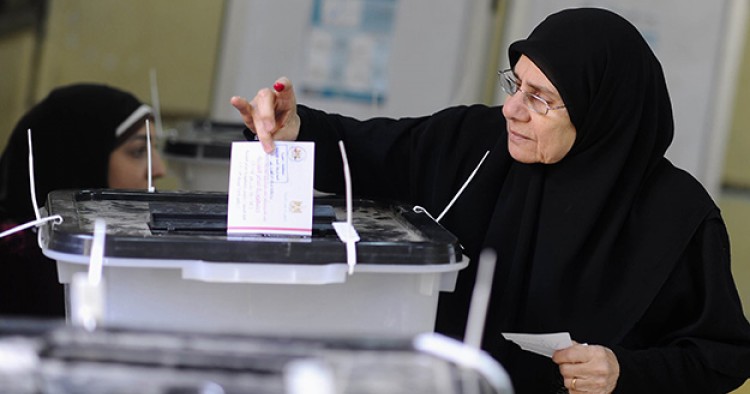 Long-awaited elections for Egypt’s parliament, which has been dissolved since 2012 as the result of a court order, have been scheduled in a two-phase process beginning this March. What will the process involve? Why are these elections important? Ahmed Morsy answers essential questions.

What happened to Egypt’s last parliament?

The last parliament, which was elected in three phases between November 2011 and January 2012, was dissolved in June 2012 by the Supreme Council of the Armed Forces (SCAF) after Egypt’s Supreme Constitutional Court deemed the country’s electoral law unconstitutional. The court regarded the law as discriminatory because it allowed political parties to compete for seats designated for independents while not giving independents the same chance. Since June 2012, the executive authority—during the first period SCAF, then President Mohamed Morsi, followed by interim President Adly Mansour, and now President Abdul-Fattah el-Sisi—has been issuing legislation by presidential decree, with no legislative branch check on its power.

When are the next parliamentary elections?

Earlier this month, the High Elections Commission (HEC) announced the dates of the elections for a unicameral parliament. The process will be conducted in two phases.

The first phase will include 14 governorates: Giza, Fayoum, Beni Suef, Minya, Assiut, Sohag, New Valley, Qena, Luxor, Aswan, Red Sea, Beheira, Alexandria, and Marsa Matrouh. Elections for this phase will occur for Egyptians abroad on March 21 and 22, while voters in Egypt will go to the polls on March 22 and 23. In the case of a run-off, voting abroad will take place on March 31 and April 1, while voting in Egypt will be on April 1 and 2.

The second phase will include the remaining 13 governorates: Cairo, Daqahliya, Qalyubiya, Menofiya, Sharqiya, Kafr el Sheikh, Gharbiya, Damietta, Port Said, Ismailia, Suez, North Sinai, and South Sinai. Voting abroad will be on April 25 and 26, while voting in Egypt will occur on April 26 and 27. In the case of a run-off, voting abroad will be on May 5 and 6, while voting in Egypt will take place on May 6 and 7.

Who will administer the electoral process?

The Egyptian constitution of 2014 states in Article 228 that the High Elections Commission is responsible for the overall administration of the electoral process until the formation of a permanent electoral commission. The HEC is a judicial body of seven led by the head of Cairo’s Court of Appeals. Other members are two deputies to the head of the Court of Cassation, the two most senior deputies to the head of the State Council, and the heads of Alexandria’s and Tanta’s Courts of Appeal. President Sisi confirmed the new composition of the HEC on July 15, 2014.

On election day, around 16,000 members of the different judicial bodies (judges, State Council members, general prosecutors, state solicitors, and administrative prosecutors) will preside over the polling stations, and will be assisted by civilian members of the state bureaucracy.

The new parliamentary elections law, promulgated by interim President Adly Mansour on June 5, 2014, establishes a mixed electoral system and increases the number of representatives from 508 to 567. Of these, 420 members will be elected through competition over individual seats; 120 will be elected from larger multi-seat circumscriptions based on a winner-take-all closed list system; and 27 members (5 percent) will be appointed by the president. Both political parties and independents can run for both the single member and list seats.

The new constituency law issued by Sisi on December 21, 2014 complements the parliamentary elections law. It divides the nation into 237 individual electoral districts and four geographical districts for the closed lists. Unlike previous elections in which each individual electoral district put forth two candidates, this time these districts can elect one, two, or three candidates depending on geographical size and population.

In accordance with Article 244 of the 2014 constitution, the constituency law calls for  “adequate representation” in the first parliament after the adoption of the constitution for women, youth, Copts, workers and farmers, persons with disabilities, and Egyptians abroad. The quotas will be applied to the four closed lists only. The below table shows the distribution of each group over the four districts.

An English version of the electoral districts can be found here.

What is the difference between the 2015 electoral system and the 2011 one?

Who has the right to vote, and how many people have this right?

Egyptians earn the right to vote at 18 years of age. Article 2 of the political rights law stipulates the conditions by which a citizen is deprived of or suspended from exercising his or her voting right. Active members of the armed forces and police are exempt from voting until they leave the service or retire. Citizens not allowed to vote include those convicted of a felony unless they have been rehabilitated; those whose money has been confiscated by a court ruling; and those dismissed from civil service for disgraceful reasons until five years have elapsed since the dismissal. Citizens whose vote is suspended are those under treatment for mental illness and those under judicial interdiction.

Who can run in the elections?

Any Egyptian over 25 years of age, unless their political rights have been rescinded or suspended, has the right to run in the parliamentary elections. The HEC announced that the candidate as well as list registration period will start on February 8. Campaigning for the first phase will be between February 26 and March 20, while campaigning for the second phase will be between April 3 and 24.

Who can observe the elections?

The HEC has announced the procedures for observing the upcoming elections, which are applicable to accredited local and international civil society organizations as well as political parties and candidates’ representatives. The main criterion for an organization to apply for accreditation is to be registered in the field of election observation, human rights, and/or the support of democracy. The HEC defined the monitoring of the electoral process as “observation of all procedures in connection with candidate registration, election campaigning, polling, ballot-counting, and announcement of election results.”

The application process for election observer groups was open from January 12 until January 20. Accepted organizations must register their observers through the HEC website by January 31 and can collect their permits from February 5 until March 14. On January 24, the HEC announced a list of 63 local NGOs and 5 international organizations accredited to observe the elections.

It is worth mentioning that the Carter Center, which has observed all elections in Egypt since 2011, closed its office in Cairo in October 2014, citing a deeply polarized and closed political space, and that the European Union will not send an observation mission to the election, unlike in 2014’s presidential election.

What are the main functions of the upcoming parliament?

The 2014 constitution describes the roles and function of the parliament in Articles 101 to 138. In addition to its regular legislative powers, the parliament should review all laws enacted since Morsi’s ouster—revise, reject, or ratify them—oversee the executive branch, and approve the annual state budget. Moreover, the parliament, for the first time, will have the power to withdraw confidence from the country’s president.

Who stands to gain the most from the polls?

In the aftermath of the crackdown on the Muslim Brotherhood and the banning of their political party, Egypt’s weak non-Islamist parties will be tested in the upcoming elections. Political parties in Egypt have long been afflicted by a set of serious deficiencies relating to leadership, organization, platform development, and funding, and it does not seem that they will overcome any of them before election day.

The new electoral law and district divisions give individuals (whether independent or affiliated to a party) a bigger chance over political parties. This reality might give candidates associated with former cadres of Hosni Mubarak’s party, the National Democratic Party (NDP), the upper hand in the election, as they are recognized as the most organized and experienced group after the suppression of the Muslim Brotherhood, especially because of their deep ties with state institutions and with the prominent tribes and families of Upper Egypt and the Delta.

What is the larger significance of these elections and what do they mean for Egypt’s transitional process?

The parliamentary elections represent the last step in the road map announced by the Army after ousting Morsi on July 3, 2013. The Egyptian government is relying on these elections to demonstrate to the international community its commitment to building democratic institutions as well as to send a message to foreign investors and donors to support Egypt’s ailing economy.