Egypt's Crisis: The Day After 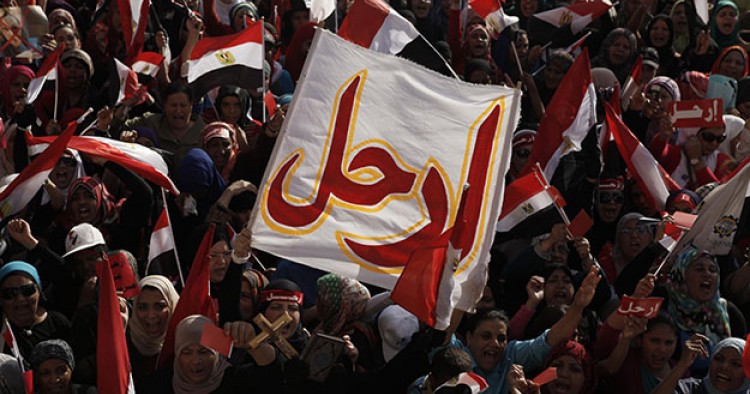 In the wake of yesterday’s outbreak of what has been called the largest protest ever, against Egyptian president Mohamed Morsi, observers are left with one question: What comes next? None of the major players appear to have a practical answer to this question. For instance, no one has produced a politically sound “exit strategy” beyond the loud demand to remove Morsi and to hold a new presidential election.

To understand what is occurring in Egypt, one must recognize that the June 30 protest is not only about a power struggle and a search for legitimacy in Egyptian politics. It is also about a much deeper and ongoing battle between the state and society. For more than six decades, the Egyptian state has subdued Egyptian society. Since the January 2011 uprisings, society has been rising up against the state. I therefore see the current protests as a continuation of the January 25 revolution, which called for the three famous principles of “bread, freedom, and social justice”—principles that Morsi and the state have not used as a guide for their time in office.

The Tamarod campaign, which has gathered more than 22 million signatures calling for early presidential elections, began this continued stage of the revolutionary process by bringing real power back to the Egyptian people. It also shows how much the Muslim Brotherhood has lost touch with the Egyptian public. Tamarod's success reflects the people's distrust in political parties and professional politicians, both in the government and in the opposition, as most Egyptians feel that traditional politicians from both sides spend most of their time and energy on television talk shows rather than addressing immediate problems. With Tamarod, a few unknown youths overtook Egypt’s traditional political establishment, yet the campaign has stopped short of offering a long-term path or road map.

Of course, political solutions should come from political parties rather than youth activists. Egypt's main opposition group, the National Salvation Front (NSF), issued what it called a “Revolutionary Statement:" “In the name of the Egyptian people with all their factions, the NSF announces public endorsement of the ouster of the regime of Mohamed Morsi and the Muslim Brotherhood." It went further, saying that "the Egyptian population continues their revolution and will impose their will, which has become unequivocally clear in all Egypt's squares.” While these statements reinforce the idea of removing Morsi from power, neither offers a suggestion for Egypt’s long-term political future.

As for Egypt's embattled presidency, it asserts its respect for free expression but is calling for dialogue to resolve the political stalemate. “The president not only respects the demands of the street but also emphasizes the need for dialogue,” said Omar Amer, a Morsi spokesperson. "We must stress that the issue of dialogue is not mere rhetoric as some claim it to be…Groups who have demands must sit down to talk about it.” Amer also reminded listeners of the presidency's repeated calls for dialogue that had been rejected by some factions of the opposition.

With the lack of an exit strategy for the ongoing crisis, all eyes are turning to the Egyptian Army. In fact, the NSF and other opposition groups have called for the Army to take matters into its own hands, at least temporarily.

In his remarks last week, Egypt’s Minister of Defense General Abdul Fattah el-Sisi appeared to lower the threshold for military intervention in the crisis. He said that while the military has recently stayed out of the political fray and focused instead on its combat capabilities, its patriotic and moral responsibility toward Egyptians obliges it to intervene to stop Egypt from "slipping into a dark tunnel of conflict and internal fighting.” Today, General el-Sisi backed up this claim by stating that if President Morsi and his government do not respond to demands for a more inclusive government within 48 hours, the military will impose its “own road map for the future.” While this statement is vague, it recognizes the need for a plan for political stability in this time of upheaval.

With increased levels of violence and the rejection of any serious dialogue to bridge the gap between Brotherhood and oppositional political forces, Egyptian politics now faces a number of challenges, including the need for a new vision, new leaders, and new organizations that reject the traditional way of doing things. The Egyptian street has proved that electoral legitimacy is not enough. Now it must identify a source of legitimacy that is not limited to election results.

If Morsi survives this crisis, it should not be considered a defeat for Tamarod, as the campaign is already an ongoing success story due to its mobilization of society in the struggle against the state. Given the popular nature of these protests, even if Morsi remains, he will undoubtedly only serve as a lame duck president. Anyone who replaces him would owe his post to the Army and would have a difficult time shedding that label as well.