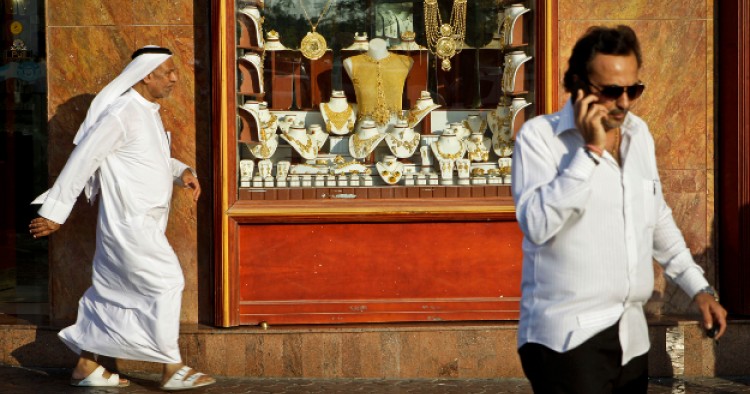 The demise of Sheikh Khalifa Bin Saeed al-Qassimi, the Arab ruler of the southern Persian governorate of Lingah, in the late 19th century resulted in its bustling port switching to Iranian hands. According to historian Graeme Wilson, “Over the weeks and months which followed the arrival of the new regime in Lingah, taxes were repeatedly raised and new charges levied for basic services.”[1] Within a few years, the port fell into disarray and by the early 20th century many of its Arab and Persian merchants moved to the free trading port of Dubai, and, as the saying goes, the rest is history.

There have recently been escalating murmurs across the Arab Gulf states of the possible introduction of income taxes as governments grapple with low oil prices. The drop in prices has been sharply felt across the six Gulf Cooperation Council states, which combined control 30 percent of the world’s proven oil reserves and supplied just under a quarter of the world’s oil demands in 2013. According to economist Nasser Saidi, crude oil sales accounted for 85 percent of Gulf governments’ revenues in 2014. Oil prices have fallen from a peak of $145 per barrel in 2008 to below $30 a barrel in 2016. As a result, major projects across the Gulf have either been scrapped, delayed or put on hold.

To cope with the loss in oil revenue, most GCC states have introduced indirect taxation, including municipal and road taxes, and have openly discussed the introduction of Value Added Tax in the near future. The GCC has distinguished itself globally with its unique offering of zero income tax environments for both citizens and expatriates. This policy, coupled with substantive subsidies that have generally provided for a decent standard of living, have helped GCC states retain a degree of internal stability at a time of regional turmoil. The introduction of direct income taxes would, thus, be a major departure from this policy whose repercussions are unpredictable.

Taxation may prompt a rewrite of the ‘Gulf social contract.’ Scholars have used this phrase to describe an unwritten agreement between Gulf citizens and their governments. This unwritten agreement basically stipulates that Gulf citizens—including the merchant and elite classes—will agree to delegate the running of the state to the ruling families so long as governments refrain from taxing them. The concept of taxation, at least understood by Americans, is that it should equal democratic representation. It is unlikely that this concept will apply to the GCC’s vision of taxation, which will take a more security focus at a time of heightened instability.

Today, the GCC remains one of the world’s last clusters of states that have successfully, and without descending into chaos, resisted the spread of democracy around the world that has swept Latin America, Eastern Europe and large parts of Asia and Africa since the end of the Cold War. That is not to say that the Gulf states are completely uninterested in citizen participation. In fact, all six countries have taken steps toward citizen empowerment in various fields, but these come with a caveat: this empowerment should not impinge upon the so-called ‘sovereign state portfolios,’ such as the ministries of interior, defense, foreign affairs and intelligence.

Although the Gulf states have up until now not seen the need to introduce income tax, a number of circumstances have combined into a perfect storm. GCC states are involved in a number of wars directly (Yemen), indirectly (Syria and Libya) and are financially backing numerous allied regimes (Egypt, Sudan, Morocco, Jordan and Pakistan). Assertive regional policies in addition to low oil prices have placed unprecedented pressure upon GCC coffers that have led them to dip into their foreign reserves and sovereign wealth funds. Cutting spending, slashing budgets and suspending projects may not be sufficient to compensate for the falling oil prices and rising military and foreign policy expenditures.

The collapse of numerous Arab states and the emergence of ISIS have fuelled a sense of urgency within the GCC to insulate their countries from the mayhem around it. Gulf citizens, thus, may stomach the possibility of income taxes—albeit begrudgingly—if it means their livelihoods are protected. The recent spate of ISIS-claimed terrorist attacks in Saudi Arabia and Kuwait has elevated fear among GCC citizens for the stability of their home countries. Given this state of heightened insecurity, the introduction of taxes is not only likely, but may even be done without the need for the dreaded further expansion of democratic participation among the citizenry.

The traditional Gulf social contract has never been more fragile, and attempts to drastically rewrite it by GCC governments no doubt comes with its risks. Taxation in exchange for ensuring the security of citizens in an increasingly dangerous neighborhood might be the new accepted social contract, but Gulf states should tread carefully nonetheless. While security remains the foremost shared interest for both citizen and ruler today, there is no certainty that demands and expectations of Gulf citizens will not change in the future.

Additionally, income taxes, though urged by the IMF for many years, may also reduce the Gulf’s appeal for foreign entrepreneurs and workers who have flocked to the region, and helped with its dramatic rise, for the tax-free environment. With the second largest expatriate community in the world after the United States, the introduction of taxes makes it that much tougher to compete with other global destinations for skilled and professional migrant labor.

Income taxes may sound good on paper, but their implementation and repercussions will be complex and unpredictable. Perhaps there is a lesson to be learnt from the Port of Lingah in 19th century southern Persia.