How Far Will Turkey Go to Weaken Iraq’s Kurds? 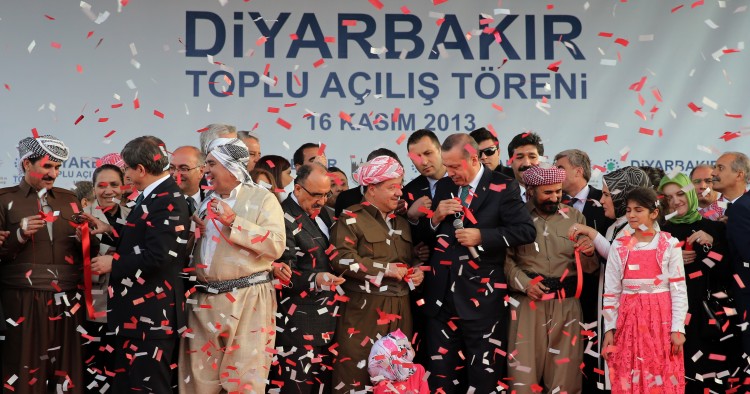 Turkey has been threatening economic sanctions and military action against its long-time ally, the Kurdistan Regional Government (K.R.G.) over Erbil’s decision to hold an independence vote. On Monday, President Recep Tayyip Erdogan warned Turkey could cut off the pipeline that carries oil from northern Iraq to the outside world and said, “our military is not at the border for nothing, we could arrive suddenly one night.” If Erdogan follows through, he would score points among the nationalists at home, but shoot himself in the foot on regional policy.

Turkey’s flourishing relationship with the K.R.G. has been one bright spot in Ankara’s troubled foreign policy record in the last few years. While Turkey’s tensions with Baghdad, Iran, Syria, Russia and the West mounted, Massoud Barzani, the president of Iraq’s autonomous Kurdish region, remained a critical ally. Turkey hedged its bet on Barzani in its efforts to counter the Kurdistan Workers’ Party (P.K.K.) both at home and in the region.

In a historic visit to Diyarbakir, the spiritual capital of Turkey’s Kurds, Barzani called on Turkey’s Kurds to back a peace process with Ankara in 2013. This was Barzani’s first visit to southeastern Turkey in two decades, and was a show of support for Erdogan, who sat in the front row while his guest addressed a large crowd waving Kurdish flags. Erdogan had billed the visit as the “crown” on efforts to end a three-decade insurgency in Turkey by P.K.K. militants.

A year later, after mounting pressure from the United States, Turkey allowed Iraqi Kurdish peshmerga to cross into the besieged Syrian town of Kobane to help the fight against ISIS—while refusing to permit its own Kurds from doing the same. Ankara hoped to use Barzani’s forces to counterbalance the P.K.K.-linked Syrian Kurdish militia, the People’s Protection Units (Y.P.G.).

Barzani helped Turkey’s efforts to counter the P.K.K. presence in northern Iraq as well. He tolerated Turkey’s cross-border operations against P.K.K. hideouts inside K.R.G. territory, and even allowed Ankara to build military bases in areas under his control where Turkey has been training peshmerga forces. The close energy and military partnership between Erbil and Ankara enraged Baghdad, which viewed the partnership as a breach of its sovereignty.

Turkey also benefited from trade with the autonomous region. The K.R.G. has become Turkey’s third biggest export market and a supplier of oil and gas. Ankara quietly dropped its decades-old opposition to Kurdish control over the oil-rich town of Kirkuk. Turkey has historic and ethnic ties to the town’s Turkmen population, and has long opposed Kurdish control, fearing vast energy resources of the town would lay the economic foundations of an independent Kurdistan, and that Turkmen would be discriminated. Peshmerga forces seized much of Kirkuk from the Islamic State after the Iraqi army fled in 2014. Turkey not only accepted the de facto control of the town by Kurdish forces; it has also benefited from it. The K.R.G. is pumping crude oil from Kirkuk via a pipeline through southeast Turkey to the Mediterranean. Turkey not only collects transit fees, but is reliant on imports to meet its own fast-growing energy needs.

Imposing sanctions against the K.R.G. would not only hurt Turkey economically, but weaken one of its very few allies in the region, which could have far-reaching implications for Turkey’s regional strategy. It would embolden Barzani’s domestic opponents that have close ties to Iran, affording Tehran further influence in northern Iraq at the expense of Ankara. If Turkey imposes a trade embargo and Iran chooses not to, Iranian firms could fill Turkey’s trade vacuum along with Russian firms, something Ankara would loathe to see. Russia has swiftly become the top funder of Kurdish oil and gas deals, with as much as $4 billion, exceeding what the Kurdish region has received from Turkey.

A weakened Barzani could also mean a stronger P.K.K. The two have been locked in a fierce competition over influence, and even engaged in armed conflict in the 1990s. The P.K.K. engages in the Kurdistan region’s politics and supports opposition parties to check Barzani’s influence. The P.K.K. is opposed to the referendum for both ideological and practical reasons. A senior leader from the P.K.K. recently criticized the referendum, defining it as Barzani propaganda. In short, the P.K.K. fears the move could embolden Barzani at its own expense.

Erdogan has to formulate a tough response to shore up the nationalists at home ahead of critical elections in 2019. But the question, however, is how far is Turkey willing to go to weaken the one ally that Ankara relied on while all others crumbled? My guess is not that far.