June 30: Tamarod and Its Opponents 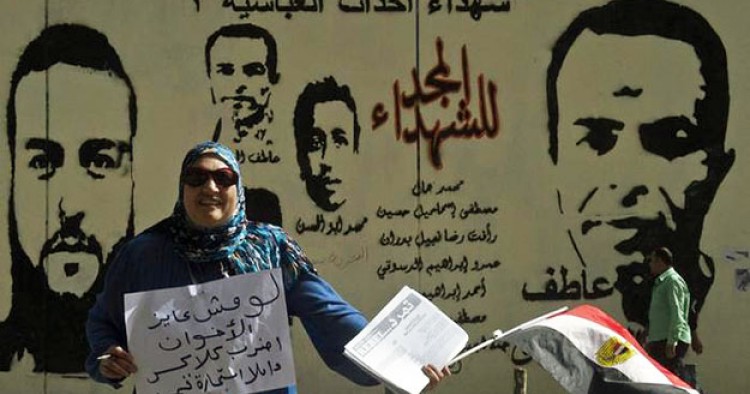 Everyone in Egypt is bracing for June 30. Demonstrations against President Mohamed Morsi on the day marking his first year in office were always expected, but a grassroots campaign has reinvigorated a waning street movement and has provided an initiative embraced by most of the country’s opposition.

The Tamarod (Rebellion) movement, launched in late April, calls for early presidential elections and seeks support by collecting signatures. Over the past two months volunteers have canvassed university campuses, city and town squares, rural villages, and even Egyptian communities overseas to amass 15 million signatures, a figure higher than the 13.2 million votes won by Morsi in the second stage of last year’s presidential elections.

The popularity of the initiative escalated rapidly. Anti-Morsi figures, including leaders of the National Salvation Front (NSF) Mohamed ElBaradei, Amr Moussa, Hamdeen Sabahi, and Amr Hamzawy, have openly endorsed the campaign. Opposition groups such as the April 6 Youth Movement and the Popular Current have handed signatures over to Tamarod to bolster the tally.

Opposition from the president and his supporters rapidly escalated in response. As Tamarod gained momentum, the president dismissed the call for early elections as “absurd.”[1] Member of al-Gama`a al-Islamiya Assem Abdel-Maged established a counter initiative—Tagarod (Impartiality)—in May, which aimed to collect signatures in order to emphasize confidence in the president’s legitimacy. After the launch, Abdel-Maged appeared on various Egyptian satellite channels touting his campaign and condemning the “instability and chaos” that Tamarod seeks to bring.[2] He argued that Tamarod was a plot devised by communists, extremist Coptic Christians, and remnants of the former regime.

In late May Tamarod announced that it had collected over seven million signatures—almost half of its goal. Altercations between the group and Morsi supporters increased across the country, with each side blaming the other for instigating violence. Official, combative communication from the Muslim Brotherhood and its political wing, the Freedom and Justice Party (FJP), intensified. On June 20, the FJP released a statement saying that the violence was an “early indication of the illegitimate schemes prepared by powerless opposition in alliance with corrupt Mubarak regime holdovers and cronies in order to drag the country into a spiral of chaos, confusion, and destruction.”[3] The FJP communiqué held ElBaradei, Moussa, Sabahi, and fellow opposition member Sayed al-Badawi personally responsible for the violence due to their boycott of dialogues with the president. Secretary General of the FJP Hussein Ibrahim condemned the looming June 30 demonstrations as not a call for action, but for “bloodshed, violence and vandalism.”[4]

Meanwhile, Islamist groups called for a “million man march” on June 21 dubbed “no to violence and yes to legitimacy,” a tactic they had used in December 2012 at Cairo University, when protests erupted in response to Morsi’s November presidential decree that granted him sweeping powers. Virtually all Islamist movements, other than the Salafi al-Da`wa and al-Nour Parties, supported the massive demonstration, which was held at Rabaa al-Adaweya Mosque. The next day, Tagarod announced that it had amassed 13 million signatures to Tamarod’s now 15 million, and that it expected to gather another seven million by June 28.[5]

The timing of the campaigns is indicative of the political climate in the country. Opposition parties, mostly represented by the National Salvation Front, took a stand against the president after his November declaration. Polarization has dominated the scene since, with the president and his party refusing to budge while repeatedly presenting offers for dialogue that are not taken seriously by a weary opposition.

When the NSF announced in February that it would boycott the next round of parliamentary elections, it eliminated the potential for the opposition to work within the political framework that had been put in place by the December constitution and the Islamist-dominated Shura Council. An opposition comprised of non-electioneering politicians meant that critics of the president had to resort to extra-legal means to bring about change in the short term.

The mandate of early presidential elections via a collection of signatures does not bear a strong legal standing, which is an issue frequently raised by Morsi’s supporters. However, the strength of the movement does not necessarily lie in the exact tally of forms collected, but in its role in mobilizing opposition. A poll conducted by Baseera published in the beginning of June stated that three out of five Egyptians had heard of Tamarod, 74 percent among urban residents and 46 percent among rural residents, proving that the grassroots movement had made considerable inroads over less than two months.[6] In comparison, the NSF, which was formed in November and enjoys the support of most non-Islamist parties, was not recognized by one third of Egyptians the following February.[7]

The popularity of Tamarod has continued to increase since the poll, along with violence between Tamarod and Brotherhood groups. All signs point to a major clash. In a press conference in Minya last week, Abdel-Maged said, “We will sacrifice everything to protect legitimacy,” suggesting that the president’s supporters will also demonstrate at the presidential palace on June 30 and echoing bellicose rhetoric that has dominated the media. In addition, this past Sunday Minister of Defense and Commander-in-Chief of the Armed Forces Abdul-Fattah el-Sisi said that the army (however reluctant it may be to return to a role of state management) would “intervene to stop Egypt from slipping into a dark tunnel of civil fighting and killing, or sectarianism, or collapse of state institutions.”[8]

Legitimate concerns plague Tamarod’s future success. Coordinators in the group have met with figures such as ElBaradei to discuss scenarios after Morsi’s departure and have reassured supporters of the campaign that the opposition has reached a consensus. But the opposition faces a number of obstacles before these transitional plans can be put into place. Demonstrations are much less likely to topple a democratically elected president with a strong backing from his Muslim Brotherhood and a wide range of Salafi groups. The army would need to find the country in a profoundly vulnerable position to usher the end of the rule of the product of Egypt’s first free and fair presidential elections—which  would create future instability by establishing a crucial precedent.

Given the president’s track record of unwillingness to compromise, Morsi will never call for early presidential elections regardless of how many signatures are collected. Despite a reinvigorated public outcry against the Brotherhood, mass demonstrations are not likely to yield favorable results for either the opposition or the stability of a country with a struggling economy and a government that functions only at half speed.

Regardless of the hurdles placed before Tamarod, the group of petition collectors has put June 30 on everyone’s calendar. For some it will be a day to “complete the revolution” and rid the government of the Muslim Brotherhood that they have criticized for over a year. For others it will be an attempted coup against a democratically elected leader that is supported by a constitution ratified more than six months ago.

Morsi's presidency, especially after the November declaration, has put the opposition and the president's supporters on a crash course that is about to come to a head. The latter are emboldened by legitimacy obtained through the ballot box, while mounting grievances and ineffective governance have created an environment that has allowed a movement like Tamarod to snowball rapidly. June 30 will test the country's delicate state.

[3] “FJP Statement on the Opposition’s Systematic Acts of Violence Across Egypt,” 20 June 2013, http://www.fjponline.com/article.php?id=1727&ref=search.php.