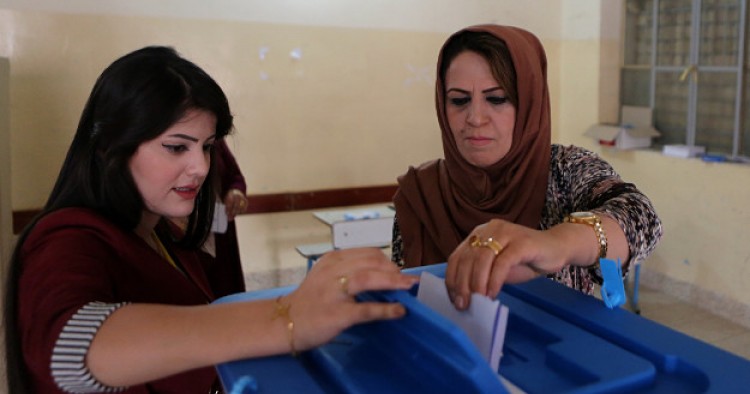 In this week's Monday Briefing, MEI experts Randa Slim, Gonul Tol, W. Robert Pearson, and Alex Vatanka provide analysis on recent and upcoming events including the Kurdish independence referendum and how it will impact the K.R.G.'s negotiations with Baghdad, Turkey's limited options to respond to the referendum, growing ties between Turkey and Russia, and the mounting political pressure on Iran's President Rouhani amid President Trump's attacks on the nuclear deal.

The majority of Iraqi Kurds will vote ‘yes’ in today’s independence referendum. Kurdish leaders argue this vote paves the way for a long period of negotiations between Erbil and Baghdad about the future framework for their relationship, and is not a unilateral declaration of independence. Iraqi officials deem the referendum unconstitutional, demanding the Kurdistan Regional Government (K.R.G.) and hand over control of borders, ports and airports.

Kurdish leaders were most surprised by the reaction of their American ally. U.S. refusal to acknowledge their right and not only their need to self-determination defied their expectations. To-date, they lack a well-defined plan for the day-after. Still, they are betting allies and neighbors will eventually adjust to the new reality that is created by the referendum. They argue the Kurdish peshmerga continues to play an essential role in the U.S.-led campaign to defeat ISIS in Iraq and all US military support to the Syrian Kurds goes through K.R.G. territory.

K.R.G. leaders are betting Baghdad, Tehran and Ankara will not resort to military escalation and/or severe economic measures against their territory. A web of personal relationships have linked Erbil and Baghdad for a very long time. This generation of Kurdish and Iraqi Arab leaders fought together against Saddam Hussein. Baghdad and Erbil will find their way to a dialogue over the terms of an amicable divorce.
They also argue Tehran and Ankara’s longstanding economic ties to the K.R.G. will trump their perceptions that an independent Kurdistan poses a threat to their respective national security interests—perceptions which they argue are not borne out by the K.R.G.’s record of good relations with both Iran and Turkey.

K.R.G. President Massoud Barzani has become one of Erdogan’s closest allies in the region. Turkey has hedged its bet on Barzani in its efforts to counter the P.K.K. both at home and in the region. Ankara’s close alliance with the K.R.G. granted it a foothold on Iraq’s political scene, placing it loggerheads with Baghdad. Turkey even built a military base in the areas controlled by Barzani, has trained peshmerga forces, and benefited from trade with the K.R.G.

But after years of military and economic cooperation, Turkey is now at the forefront of international opposition to the K.R.G.’s referendum. Erdogan has threatened economic sanctions and even military action against his long-time ally. After having invested so much in the autonomous region, Turkey sure has levers to pull to force Barzani’s hand. The question, however, is how far is Turkey willing to go to weaken one of its few allies in the region? Cutting off the oil supplies from the K.R.G. will have implications for Turkey’s ailing economy, so will imposing a trade embargo. Despite threats by Ankara, military action against Erbil is highly unlikely given the potential destabilizing effects of such action.

Most important of all, weakening Barzani is likely to empower his opponents that are close to Iran, enhance Iranian influence in northern Iraq, and boost Ankara’s arch enemy, the P.K.K. But to shore up nationalists at home, Turkey has to formulate a tough response to referendum results. Doing this without jeopardizing strategic interests will be too hard, even for Erdogan.

Presidents Recep Tayyip Erdogan and Vladimir Putin will meet September 28 in Moscow in the latest in a whirlwind series of head-to-head talks over the last year, during which Erdogan has steadily distanced Turkey from the West. Once again, Turkey will be seeking Russian favors. As master of the pace, Putin has offered Turkey measures that actively further Russian aims—Turkey’s participation as a partner with Moscow and Tehran in the Syrian peace process, construction in Turkey of a nuclear power plant and a new pipeline, intelligence cooperation, and the sale of the S-400 anti-aircraft missile system.

On things that matter most to Turkey, especially Ankara’s ambition to exclude Syrian Kurds from any significant role in Syria’s future, the Russians have firmly opposed Turkish ambitions. Even with differences, however, the shared ambition of both leaders to weaken and intimidate the West raises the stakes. Turkey deeply resents the treatment it’s received at the hands of Europe and the United States in recent years. Europe does not foresee E.U. membership for Turkey, and the United States seemingly has been more focused on defeating ISIS than befriending Turkey.

Nevertheless, an objective view of Turkey’s actions reveals an almost conscious ongoing sacrifice of traditional Turkish interests to Russia in order to underline Ankara’s disdain for its old allies. Will Erdogan draw a line for Turkey or proceed full speed ahead? At the moment, there is no sign of slowing down.

The Rouhani government still has the upper hand in its domestic argument to defend the JCPOA, despite President Donald Trump’s agitation to withdraw. The Rouhani team’s message at home is simple: Iran does not have the luxury to abandon the deal. The state of the Iranian economy is at the center of the calculations. From Tehran’s point of view going forward, the worst scenario is if the United States can somehow convince other world powers to seek to supplement the deal by encompassing non-nuclear issues—such as Iran’s ballistic missile program—as part of future negotiations.

In Tehran, such possible add-ons to the agreement are considered as secondary in importance and escapable, while the core of the 2015 nuclear deal is seen to be secure. On the foreign policy front, the Rouhani government is increasing pressure on the Europeans to escalate delivery of agreed commercial agreements, principally on the question of Iran’s purchase of aircrafts. Besides Iran’s practical aviation needs, Tehran’s ability to receive new aircrafts—which was included in the nuclear deal—is symbolically sensitive for Rouhani. In fact, advancing the sale of some 200 aircrafts Iran has ordered has become a litmus test for its engagement efforts with the global business community.

Meanwhile, the issue of access to foreign financing remains a concern and is hence another key priority. While most of the pledged agreements are yet to be fulfilled, the lack of notable pushback by hardliners in Tehran against large-scale financial agreements with foreign entities shows the extent of consensus in the Iranian regime for engaging the international community regardless of Trump's threats.