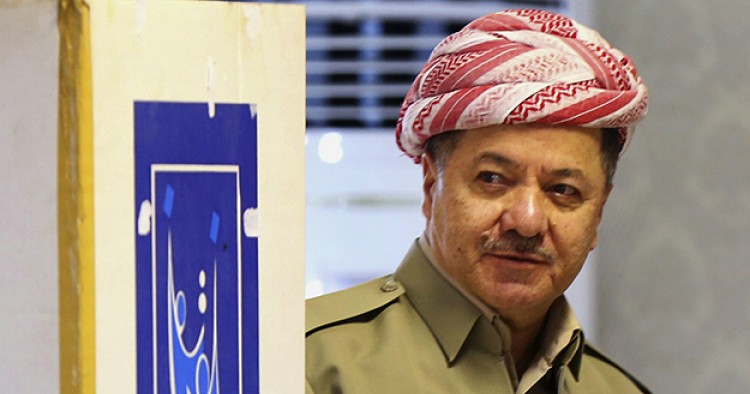 Iraqi Kurdistan’s democratic future and stability is at risk, and one party and family is especially closely linked to the crisis. In recent years, the Barzani family and the Kurdistan Democratic Party (K.D.P.) have consolidated power while displaying indifference to rule of law when facing critics or uncooperative minorities. This creeping autocracy should urgently concern those hoping to see a stable new democracy in a troubled region. On September 25, the Kurdish region is due to hold its independence referendum. If it goes ahead, Kurds will vote for separation, with formal independence only a matter of time. This means time is running out to help protect the new state’s institutions, attitudes, and founding principles.

There is already need for scrutiny. For all the Kurdish region’s successes as a peaceful, tolerant haven, increasing numbers of human rights abuses are being reported, journalists are repeatedly harassed or assassinated, and Kurdistan’s democratic institutions (never truly consolidated) have suffered a series of setbacks. Many such setbacks can be linked to heavy-handed rule by K.D.P. and its nepotistic first family.

Dominated by the Barzani tribe, the K.D.P. is the Kurdistan Regional Government’s (K.R.G.) controlling faction. K.D.P. rule is also near-absolute in the region’s north, supported by party peshmerga fighters and security forces. At its head is Massoud Barzani, K.R.G. president since 2005. Though Barzani’s terms ended in 2013, a controversial parliamentary decision gave him a two-year extension, and Barzani remains in office despite that extension's expiry. While elections are now scheduled for November, with Barzani claiming he won't seek re-election, his efforts to cling to power have already created deep rifts and tensions.

Even if Massoud stands down, the Barzanis will remain entrenched in public life. The president’s nephew, Nechirvan, is prime minister, while the president’s son, Masrour, is head of the Kurdistan Region Security Council, holding prominent positions in party and K.R.G. security agencies. Masrour in particular has been accused of involvement in the assassinations of journalists and political opponents, and allegedly runs secret prisons. Nevertheless, many observers believe he is being groomed as his father’s successor.

Kurdish dynastic politics is neither new, nor unique to the K.D.P. Its old rival, the Patriotic Union of Kurdistan (P.U.K.) is closely tied to the Talabani family, though it is the Barzanis and affiliates that fill key K.R.G. offices. Many young Kurds increasingly resent the nepotism and corruption associated with both families, exacerbated by a struggling economy and years of conflict against ISIS. But while K.D.P. nepotism should temper optimism about the future state’s adherence to democracy and rule of law, the party’s role in eroding democratic institutions is more worrying.

Barzani’s presidential overstay is just part of an ongoing political crisis. Parliament has not met since 2015, and its speaker and other parliamentarians from Gorran party have been barred from entering Erbil. Gorran (Movement for Change) entered a power-sharing agreement with the K.D.P. in 2014. The relationship soured when Gorran tried to introduce bills amending the presidency laws—a move the K.D.P. saw as designed to undermine the Barzanis. The coalition’s collapse led to Nechirvan dissolving parliament, with K.D.P. officials defending the decision as a reaction to Gorran violating the power-sharing agreement. Massoud himself justified it as necessary to prevent a coup d’etat against the presidency, attacking Gorran for undermining regional stability. The dispute effectively shut down Kurdish democracy, all to prevent reforms threatening K.D.P. dominance.

Beyond politics, the K.D.P. is linked to human rights abuses, especially in parts of the “disputed territories” where control is contested between the K.R.G. and Iraq. Over recent years, K.D.P.-controlled peshmerga have taken control of territories like Sinjar and Nineveh Plains—areas of considerable ethno-religious diversity. In Sinjar, K.D.P. forces were also documented implementing humanitarian blockades, denying resources to the largely Yazidi civilian populations. Some Yazidi and Christian groups accuse the K.D.P. of supporting minorities only where it suits the party, and targeting non-Kurds who won't accept K.D.P. rule. Whether minority voices are heard and respected throughout the referendum process remains to be seen, but tensions in the disputed territories bode ill for reconciliation.

The referendum itself is a manifestation of K.D.P. efforts to retain power. Initially opposed by the P.U.K. and Gorran, the vote was announced without support from surrounding states or the international community, and without a clear plan for subsequent negotiations with Iraq. Basic questions remain unclear, such as who will vote, and how fair voting in disputed territories will be ensured. Off-record, some Kurdish officials express dismay at the referendum’s handling, claiming the independence movement has been co-opted for K.D.P. political interests.

Does this matter? Today, Iraq’s Kurdish region remains a beacon of stability and tolerance. But recent stability does not guarantee future stability, and political tensions already run high, with violence not unheard of. If democratic outlays for grievances continue to diminish, even as corruption and economic stagnation remain, then the promise of a stable state may prove hollow.

Yet the opportunity to lay stable foundations remains. The K.R.G. (and K.D.P.) remain acutely sensitive to international opinion, spending extensively on public relations to encourage future recognition of Kurdish independence. While Kurds alone must decide questions relating to self-determination, the United States and allies should use their influence to scrutinize alleged abuses and ensure reforms are undertaken sooner rather than later. President Barzani must make good his promise to step down, establishing precedent for peaceful power transfer. Elections should be carefully observed to ensure fairness. Real commitments should be sought that rights and freedoms will be robustly defended now, and after independence. Equally importantly, the voices of dissenting minority groups should be heard and respected by the K.R.G. and the international community.

Kurdistan’s value as an ally is undeniable, but its leaders cannot be given carte blanche for corrupt or abusive practices which threaten long term security. While the region’s successes leave much to be hopeful about, if Kurdistan is to live up to its potential its leaders must step up (and sometimes step back).