The Kurds Miscalculated with Referendum 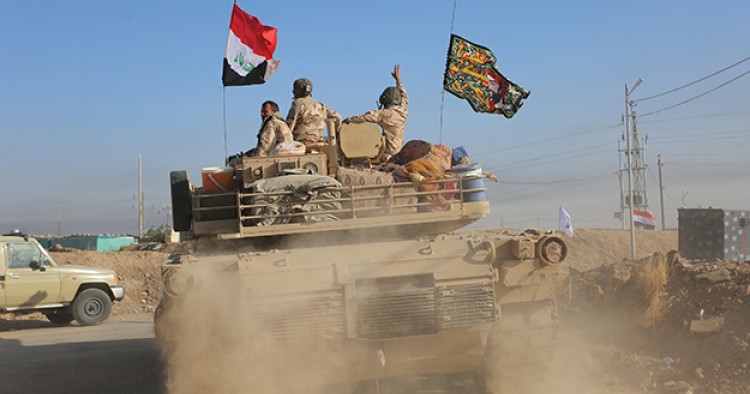 The most surprising thing about the Kurdistan Region of Iraq’s (K.R.I.’s) independence referendum was that it took place at all. Leading up to the vote the international community stepped up its opposition. Baghdad also increased pressure on Erbil with a decision by the Iraqi Supreme Court declaring the referendum illegal, and issuing a series of delegitimizing statements from top Iraqi officials. But K.R.I. President Massoud Barzani and the Kurdistan Regional Government (K.R.G.) pushed forward, doubling down on their determination to achieve independence sooner rather than later. The overwhelmingly pro-independence result surprised no one.

Events since the vote were also unsurprising—though the speed of those events has been remarkable. International concerns and predictions throughout the referendum campaign were largely correct: initially the K.R.G. and Kurdistan Democratic Party (K.D.P.) made more overt attempts to take control of land outside of the K.R.I.’s borders, but ultimately the Iraqi government struck back. Monday’s seizure of Kirkuk by Iraqi troops and militias was sudden, but came as the culmination of a series of increasingly aggressive moves from Baghdad. In recent weeks, large numbers of troops were deployed near Kirkuk. Kurdish airspace was completely shut down to commercial traffic, while the federal Iraqi government demanded Kurds hand over control of their airports—vital lifelines for the landlocked territory. Meanwhile, dollar sales and foreign currency transfers were halted in the region.

At the time of writing, Iraqi forces had largely taken control of Kirkuk city, though reports of active fighting were limited. Nevertheless, in the coming days open conflict in and around Kirkuk seems increasingly possible as Erbil looks to hold or regain key territory, and emboldened Shiite militias attempt to push further into the governorate. Pressure on the K.R.I. also has stepped up from outside of Iraq: Iran and Turkey have also moved troops to the border, and have shut down their border crossings—vital sources of Kurdish revenue, and important links to the outside world.

This string of bad news, though forecasted, has caught the K.R.G. off guard. For Barzani and the K.D.P., this referendum was supposed to consolidate K.D.P. power in the region, allowing the president to seal his legacy. The hardline position on independence was imagined to be calling the bluffs of an international community reliant on Kurds to defeat ISIS, and an Iraqi government too weak to stand in the way of Kurdish demands.

This was a miscalculation, perhaps stemming in part from Kurdish officials falling for their own public relations. Notorious in Western capitals for an aggressive media and lobbying strategy the K.R.G. has worked hard to promote the Kurdish statehood dream, while suppressing dissent and critical voices at home. The only exposure most informed Americans have had with the Kurdistan issue prior to September came from glowing articles about the peshmerga’s fight against ISIS, or its attempts to promote women’s rights in Kurdistan, or about the K.R.I.’s tolerance of minorities. The region’s darker side has been explored much less. The growing political oppression and corruption, steady movement toward a one-party state, violence and crimes towards minorities in disputed territories, and violent suppression of the Kurdish free press have all received little attention in mainstream discourse.

But Western policymakers were increasingly aware of difficulties brewing in the K.R.I. The threat of post-independence instability in a region that only just won the fight against ISIS was a key part of international concern during the referendum. The K.R.G. merely saying the right things was insufficient to sway international opinion.

The economics were also inauspicious. The Kurdish economy has been in ill health for years and is now risks collapse. K.R.G. economic strategy is based on oil export, but low prices, a poor relationship with Baghdad, and a lack of trust from the oil industry following a series of legal disputes has left the strategy in tatters. This weakness has left Erbil unable to pay public sector salaries. Though peshmerga fighters kept fighting despite months of unpaid earnings, it is not clear how Kurdistan will continue functioning with closed borders, no incoming flights, and lost access to foreign currency. This potential for economic collapse is another blow to stability.

What now is to be done? The speed of deterioration must be of grave concern, and Iraqi aggression has not helped calm the tension. Days before the referendum, the U.S. State Department put out a statement, warning that if the vote was conducted it would be “highly unlikely that there will be negotiations with Baghdad,” and that the international offer of support for negotiations “would be foreclosed.” This statement had its place as part of a negotiating strategy, demonstrating Washington’s seriousness in its opposition to Barzani’s stance. It must be tempting now to allow the K.R.G. to reap the whirlwind they may have unleashed, effectively punishing them.

This must not happen. There are many thousands of lives at stake, and the security of one of the Middle East’s few bright spots of hope for a peaceful future hangs in the balance. In the days before the referendum, officials warned that Kurdistan could be placing itself on a path toward inter-ethnic war in the disputed territories, and direct conflict with Baghdad. But even those who warned of the dangers have been taken aback by the speed of events. Ethnic tension remains high in Kirkuk, and the Nineveh Plains, while some of the West’s closest partners in the fight against ISIS could soon be at war. To date, the United States and other allies still train and equip forces controlled by both Iraq and the K.R.I.: even if the West takes no side, it will still have a stake in the successes—or failures—of both.

The international community must engage with both Baghdad and Erbil to ensure conflict is averted. Negotiations must be encouraged to take place quickly, with a view to diffusing tensions. The question of the disputed territories is complex, and cannot be easily resolved, and so it will be vital to work with all parties in the region to first reduce tensions, political and ethnic. Only once the larger issue of Kurdish statehood has been resolved one way or another and tensions are at safer levels should negotiations turn to more complicated questions related to control of the disputed territories. Meanwhile, the K.R.I. cannot be allowed to fail economically. Were this to happen, the real losers would be ordinary Kurds and minorities who have, to date, been comparatively sheltered from the conflicts and instabilities prevalent in the wider region.

This is not to give Kurdish leaders carte blanche. Barzani and many other K.D.P. officials should take some responsibility for the K.R.I.’s predicament. In time, the international community should seize the opportunity to help re-secure Kurdistan’s democracy, nursing the increasingly broken political system back to health and better scrutinizing K.R.G. action. But political punishment must come second to preserving the security and successes of the K.R.I., and the rights and freedoms of all its peoples.