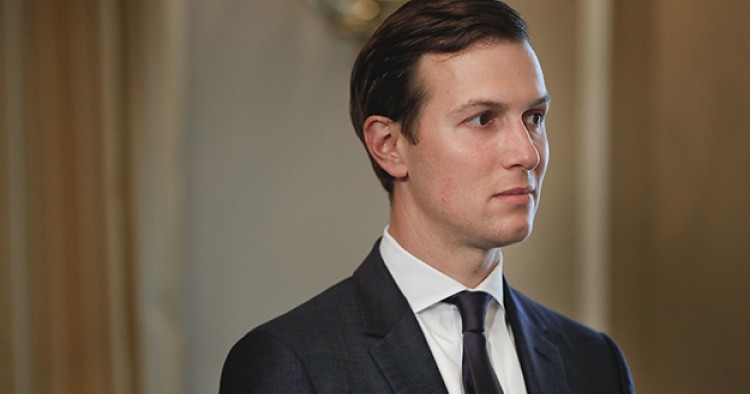 Jared Kushner, President Donald Trump’s son-in-law and envoy to the Middle East, is scheduled to arrive for talks with Israeli and Palestinian leaders this week. Despite engaging early on and seemingly prioritizing the Middle East by making it his first foreign trip this May, the Trump administration has done little in terms of follow-up since to convey any sense of seriousness. Instead, it has been besieged by news of scandal and resignations on a near weekly basis, forcing players in the Middle East to wonder how long Trump will remain president.

Adding to the confusion on the Israeli-Palestinian issue has been the failure of the White House to articulate a position on a path forward. Earlier this year, Trump backed away from the long-held U.S. position on a two-state solution, saying he would leave it up to the parties. This meant the Israeli government, which was uninterested in a two-state solution, could dictate terms. Palestinian leaders like Mahmoud Abbas, who had staked everything on Palestinian statehood, were left at a loss. Abbas will surely seek once again to get Kushner to commit the White House to articulating a clear, public position on a negotiated outcome and may perhaps hope that staff changes, like the departure of Stephen Bannon, will make that possible.

But if past administrations had failed to deliver an engaged, serious and evenhanded approach, Abbas pinning any hopes on this administration doing so is a lost cause. That he seems to be doing so anyway is a reflection of how little power and strategy he actually has.

Iraq’s Prime Minister Haider al-Abadi announced on Sunday the launch of a military operation to take back the city of Tal Afar from ISIS. The operation will not be easy, as there are around 1,000 hardened ISIS fighters there with no routes of escape, but is likely to end in defeat for ISIS. With 10,000 to 50,000 civilians estimated to still be in the town, the battle will add to Iraq’s already acute humanitarian needs. After Mosul and Tal Afar, ISIS will still have two significant enclaves in Iraq: in and around Hawija and from Ana to al-Qaim in the Euphrates River valley.

Abadi stands to benefit politically from victory in Tal Afar. He has an eye on the upcoming national and provincial elections planned for 2018, and is fighting off leadership challenges from former Prime Minister Nouri al-Maliki and other Shiite rivals.

Turkey has maintained a keen interest in Tal Afar, as the population is overwhelmingly Turkmen, both Sunni and Shiite, although all Shiites and many Sunnis have fled since ISIS took the town in 2014. Turkish concerns over the force taking Tal Afar seem to have been resolved in recent talks between Ankara and Tehran—20,000 members of the Popular Mobilization Forces will participate, alongside the Iraqi army and federal police, but presumably not from the more radical Shiite groups, such as Asa’ib Ahl al-Haq.

The United States and the anti-ISIS coalition are providing air support and precision artillery, and this should continue in Tal Afar, and later in the battles for Hawija and the Ana to al-Qaim corridor.

President Trump is set to announce his strategy “on a path forward for America’s engagement in Afghanistan and South Asia” in a prime-time speech tonight. The Afghanistan policy, finalized at the president’s Camp David meeting with his top national security advisers last week, came after a lengthy review process that assessed several options—ranging from a modest surge of troops to a complete withdrawal.

But while the White House and Pentagon have not released details of the final strategy, the administration is unlikely to abandon Afghanistan and pull out all troops. Such a decision would undo the gains of the past 16 years, and as in Iraq, allow al-Qaeda and the Islamic State to use the Afghan territory to plot attacks against the United States and its allies.

A controversial plan to send mercenaries to fight the Afghan war also appears to be off the table after the exit of Trump’s former chief strategist Stephen Bannon. The administration’s plan, therefore, is expected to include sending as many as 4,000 troops to assist the Afghan security forces to arrest the Taliban momentum and step up counterterrorism operations against al-Qaeda elements and a resilient offshoot of the Islamic State in South Asia.

The military efforts are also likely be augmented by a diplomatic push to seek regional cooperation for a political solution to end America’s longest war. Moreover, the administration is likely to increase pressure on Pakistan to cut its support for the Taliban and other militant groups fighting in Afghanistan.

Launched in 2013, OBOR seeks to link China with world markets through an ambitious set of land and maritime trade routes across Eurasia and adjacent seas. Thanks to its geography and size, Iran is a key hub in the OBOR model. Iran’s interest in OBOR, by some estimates a $1 trillion investment over a 10-15 time period, are driven by four factors: it provides potentially considerable economic opportunities for Iran; it provides Tehran with political insurance against international isolation in the future; it gives Iran a clear advantage over some of its most prickly rivals, such as Saudi Arabia; China-Iran trade in the energy sector will further expand while military-to-military ties have a great potential for growth.

Meanwhile, the hardline faction in Iran has long argued that the nation should prioritize Russia and China over the West. This posture is above all shaped by ideological preferences. For Beijing, Iran is already a key Middle Eastern market, but it is also a future potential important hub for trade across West Asia. If China can help Iran in this context then there is a marriage of convenience that will be hard to disregard. Meanwhile, as OBOR was one of President Xi’s signature foreign policy ambitions, he will most likely remain faithful to it while he is in office.

Relations between Germany and Turkey are at their lowest point of the postwar era. They hit a new low following the arrest of a Turkish-born German writer in Spain. The writer, a frequent critic of Turkish President Recep Tayyip Erdogan, was held by Spanish authorities in connection with criminal proceedings in Turkey. Germany’s foreign minister urged Spanish officials not to extradite the writer. German politicians are also furious that Erdogan described Germany’s main political parties as “enemies of Turkey” and urged Turks living there to boycott them in the elections.

Relations began to sharply sour after authorities banned Turkish politicians from holding campaign rallies in Germany ahead of a constitutional referendum in Turkey. Erdogan then compared the authorities in Berlin with the Nazis and Ankara canceled a German delegation's visit to the Incirlik airbase, where German military personnel and jets were stationed.

Erdogan expects ties to improve after the German elections, but many in the Turkish business community fear this might not be the case. Merkel recently said that her government would not exert extra efforts to continue the European customs union agreement with Turkey, which contributes to Turkey-E.U. economic integration and is particularly important for the Turkish economy.

Both sides have a lot to lose by allowing relations to deteriorate further, but Turkey seems to be the party that is more vulnerable. While Merkel needs Erdogan’s help to stem the flow of refugees into Germany, the Turkish president relies on Germany, his country’s largest trading partner, as a market for its exports as well as its tourists, one of the biggest groups that visits Turkey. Erdogan hopes to score points at home with his harsh tone against Germany, but he might pay dearly if the German chancellor is serious about the customs union.