Not All Iraqi Kurds are On Board with Referendum 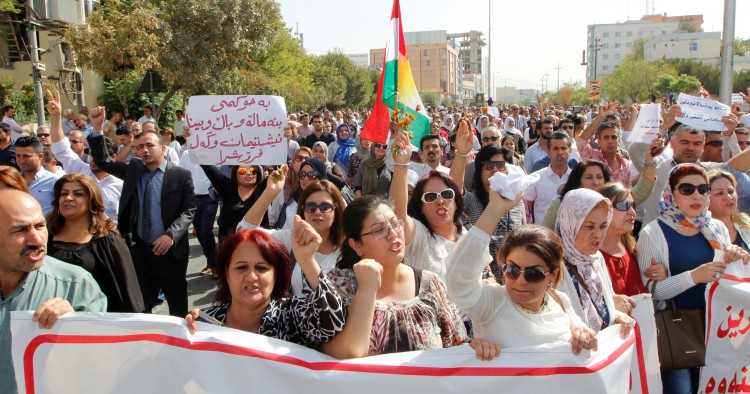 While much of the international dialogue concerning the Kurdistan Region of Iraq’s independence referendum has concerned will of “Kurdish people,” the media and international community have ignored the fact that the Kurds themselves are deeply divided on the issue.

One survey estimated the total “yes” vote at 67 percent, far below the 99 percent majority recorded in a 2005 non-binding referendum. While independence rallies pack stadiums in the Kurdish Democratic Party (K.D.P.)-controlled governorates of Duhok and Erbil, the governorates under the administration of the rival Patriotic Union of Kurdistan (P.U.K.), Sulaimaniyah and Halabja, have been far less enthusiastic. A recent public opinion survey which projected that 66 percent of its residents will either vote against independence or abstain in the September 25 referendum.

Last week, as parliament convened for the first time in two years since being forcibly dissolved, 43 M.P.s (of 111) from Gorran, Komal, and the P.U.K.­—most of them from Sulaimaniyah­—refused to participate in what they considered to be an illegal session with the sole purpose of legitimizing an “unlawful” referendum.

Given its significance as the “city of struggle and sacrifice” for its role at the vanguard of the resistance to the Ba’ath regime, it seems ironic that Sulaimaniyah seems unmoved by President Massoud Barzani’s appeals to Kurdish nationalism and statehood. However, a closer look reveals that opposition reflects rising popular frustration with the growing political and economic power imbalances between the K.D.P. and P.U.K.-administered zones in favor of the K.D.P. The prevailing wisdom in Sulaimaniyah is that the referendum is not a vote on independence at all, but rather a mandate for the perpetuation of autocratic, predatory governance by both the K.D.P. and P.U.K., and in particular, an authorization for a further extension of Barzani’s  legally expired (and already twice extended) presidential term. Many also see their opposition as a motion of no-confidence against a corrupt, internally divided P.U.K.—whose most powerful executives have thrown their weight behind the referendum in an apparent bid to re-establish 50-50 power sharing. Other factions of the P.U.K have aligned themselves with Gorran and the rest of the opposition, preferring to build local coalitions that protect Sulaimaniyah’s interests instead of participating as a junior partner in a grand coalition with a more powerful K.D.P.

Azada Rash, an organizer of the 1991 uprising against Saddam Hussein and a member of the reform-oriented Gorran Movement, expressed his intention to vote for independence on September 25, but admitted that, as a citizen of Sulaimaniyah, he is uneasy about the prospect of an independent Kurdistan under its current leadership, “The people [in Sulaimaniyah] are cold. They have no confidence left in their leadership … these are the people who engage in corruption, who have exploited our nation’s resources, who have killed our journalists, who have turned our people’s freedom into hopelessness and deprivation.”

Sulaimaniyah’s political marginalization is felt most acutely by the average citizen in terms of economics. Many residents regard the time between 2009 and 2013, when the K.D.P. and P.U.K. equally shared the wealth distributed to the Kurdistan Regional Government (K.R.G.) via the federal government, as a period of prosperity. However, as the balance of power shifted in favor of the K.D.P., economic and infrastructural development imbalances between their respective territories became more obvious. As a K.D.P.-dominated government led the push for the K.R.G.’s economic independence, its zone ­­saw the lion’s share of foreign investment, particularly from deals with international oil and gas companies, and developed significant trade relations with Turkey.

Meanwhile, Sulaimaniyah saw only 1 percent of the Kurdish region’s total foreign investment and remained heavily dependent upon the public sector. [i] Substantially lower rates of public investment in Sulaimaniyah, relative to Erbil and Duhok, have meant that, in general, the quality of public services and utilities has either not been able to keep up with the rate of urbanization in the province or has deteriorated since 2003. [ii] Sulaimaniyah’s unemployment rate is higher, its average household income is approximately 20 percent below Duhok and Erbil’s, and 45 percent of its residents rely on government assistance for food compared with only 20 percent in Erbil. Consequently, the governorate has been more severely affected by the 2014 financial crisis and subsequent austerity regime than the rest of the K.R.G. In the past three years, it has been the scene of labor strikes, mass demonstrations and occasional violence related to dissatisfaction with public salary cuts.

Sulaimaniyah’s political marginalization and the pain of the economic collapse have, for Gorran and the P.U.K., underscored the importance of maintaining good relations with the federal government to, among other things, restore the K.R.G.’s 17 percent of the federal budget and offset K.D.P.’s influence in the K.R.G. This policy has lent itself to K.D.P. propaganda mills that routinely “expose” members of the opposition as paid agents of Nouri al-Maliki or Qassem Soleimani.

More seriously, K.D.P. and some P.U.K. officials have stated that they intend to prosecute and punish dissidents. Meanwhile, Sulaimaniyah’s opposition promotes the narrative of a vanquished Sulaimaniyah beneath the heel of corrupt K.D.P./Erbili chauvinists. As referendum approaches and the pitch of nationalist fervor rises in Duhok and Erbil, the Kurdish constituencies are transforming each other yet again into enemies. Instead of promoting national unity, the referendum has damaged inter-communal relations, evoking memories of the political impasse, mutual suspicion, and accusations of betrayal that immediately preceded the civil war in the 1990s.

However, as the referendum approaches and Baghdad appears more determined to stop it using legal and military threats, Sulaimaniyah’s resistance may give way to acquiescence and acceptance of an undemocratic, but resolved, K.R.G. vis-a-vis an increasingly assertive federal government. Nevertheless, Sulaimaniyah residents and the opposition will remain cynical that the promise of statehood is an instrument of K.D.P. power and that the outcome of the referendum will be politically and economically detrimental to their governorate. Therefore, an honest effort to build a Kurdish state will require the K.D.P. and the P.U.K. to gain the confidence of Sulaimaniyah by making credible commitments to good governance, and a more equitable distribution of wealth and services.