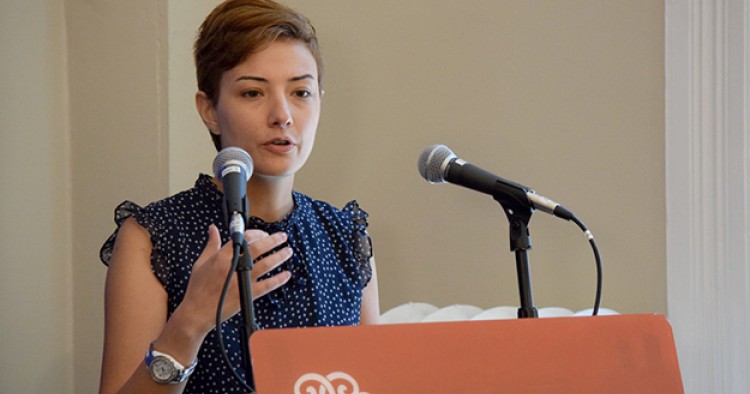 Syria’s uprising-turned-war is the first to unfold on social media for the whole world to see in real time. While this gives unprecedented power for local, grassroots activists and citizen journalists, it also comes with challenges.

Three Syrian women, all working as media activists while confined to living in exile, talk about these challenges. In shaping the narrative on Syria, they must dispel media clichés, regime propaganda, a stubborn local patriarchy, Islamist extremists and, perhaps most importantly, an international audience that is increasingly desensitized to the suffering of Syrians. They have relied on the women and men who have reported from inside Syria, though by now most of their colleagues have become similarly dispersed all over the world, creating a sort of global network.

“We’ve become Syrians without borders,” said Milia Eidmouni, journalist and co-founder of Syrian Female Journalists’ Network, a non-profit that trains Syrian journalists on journalism and gender. She sat down for a private chat during her visit to Washington last month with colleagues Rula Asad and Caroline Ayoub. Together they represent a vocal segment of Syria’s citizen journalists who are often the only ones with access to the real story inside Syria, though they are more activists than impartial journalists.

“Don’t think of our journalists as traditional (impartial) media. They are citizens who were in the streets protesting against Assad, then they were forced to leave, but they continued on Facebook before they realized they had to do more, and they did. Now they have newspapers and magazines and radio,” added Asad, also a co-founder of Syrian Female Journalists.

Among one of the more popular initiatives is the grassroots online broadcast station called SouriaLi, which means Syria is for me. It targets Syrians anywhere, and features programs like Jadayel, which highlights real life stories from women inside Syria and in exile. SouriaLi now collaborates with some local European radio stations to reach refugee populations with public announcements.

“Everything from where they can buy cooking ingredients for Syrian cuisine to how they can navigate European bureaucracy,” said Ayoub, co-founder of SouriaLi Radio. She fled Syria to Marseille, France, after the Syrian regime detained her for a month in 2012 for her peaceful activism.

The Syrian Female Journalists’ Network started out targeting female journalists for training and development, but soon realized they must also include the men, who now represent half of the trainees and learn about gendered biases in reporting. And while these three women dedicate their time to this, they also find they must dispel the stereotypes imposed upon them and the Syria story by the international media or, more recently, by rightwing politicians and fear-mongers.

As the Syrian conflict grew more violent and sectarian, Ayoub also found that she was sometimes forced into a religious pigeon hole. She would give interviews to Western journalists who, on their own accord, would lead with Ayoub’s Christian identity.

“They frame me as a Christian. That’s not how I identify. It’s how the regime identifies me. I am Syrian,” said Ayoub. She echoes a common sentiment by many Syrians who resent the sectarianism that has risen from Syria’s war, an element they blame on cynical regime antics and the proxy wars between Saudi Arabia and Iran.

There are many women-led initiatives that help communities, like that of Raeefa, an activist who collected hearing aids for deaf children in Syria so they can better hear an air raid and flee the scene before bombardment begins. There are also tragedies that turn into a point of reflection for the community, like the story of Hasna, a brave activist who was detained and raped by the regime before being released back to her community. The stigma was too much and she later committed suicide. Her tragic death was covered by SouriaLi.

Local patriarchal traditions, with their impulse to eject women from the public sphere, end up shaping stories that come out from almost anywhere in Syria. For example, any time a community inside a rebel-held area loses a fighter, activist or civilian due to regime fire, the fallen are given the burial of a martyr with all the public displays of grief and pride. This is almost always the case unless the fallen was a woman. Then, even if she is called a martyr, there is hardly any public ceremony, and her funeral remains a private family affair for friends and loved one, according to the activists. They point to the hundreds of online videos of public funeral processions for male “martyrs”. There are almost none that publicly honor the women who have been killed.

“We’re tired of women being referred to solely as ‘mother of so-and-so,” said Asad, referring to the cultural norm of calling women as mother of the eldest son, like Um Mohammad. “Even female martyrs are identified as wife of so-and-so or daughter of so-and-so,” she added.

The so-called moderate rebel groups, including ones financed by the United States and its allies, show little restrain from infringing on women in the public sphere.

“Some of the so-called moderate rebels that are U.S. backed have banned newspapers altogether. At first, they blacked out photos of women. Then, they don’t want any images of women to appear in the media,” said Asad, referring to some of the media projects she oversaw in those areas.

And so most acts of courage by women in the face of such scrutiny will often go unreported because local media activists are gagged, and the international media has no access to such areas.

These dynamics have also facilitated the spread of regime propaganda, modeled after Soviet style antics. One tactic that has been used successfully by the regime is to spread a rumor that the opposition and international media will come to believe only to disprove it later, thus discrediting the opposition. There was a high profile case in late 2011 when 18-year-old Zeinab Husni disappeared from an opposition area in Homs. A rumor then circulated that she had been raped and killed in regime custody. Regime authorities released an unrecognizable body to her family claiming it was hers, and the story caught the attention of international media. But a couple of weeks later, the regime produced Husni on state-run television, alive and kicking. In the on-air “interview,” she was compelled to answer questions about her wellbeing and the “lies spread by terrorists,” a term the regime uses to describe the opposition.

With no end in sight for Syria’s war, many activists continue their work in exile even as they resign themselves to the possibility that they may never return home again, and may never bring culprits to face international justice. But for Asad, Ayoub and Eidmouni, the work must continue.

“At least we document everything, and even if we don’t see resolution in our lifetime, we leave this memory to the next generation of Syrians,” said Ayoub.