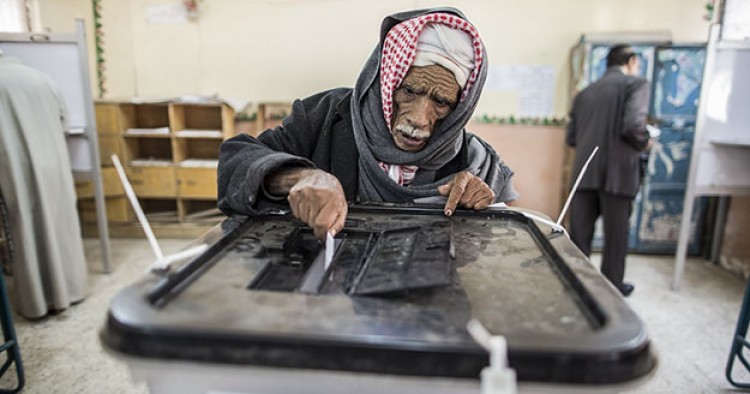 In early 2012, Hagg Hassan had a complaint. A resident of the village of Ab’adeyet Wally Mizar in Fayoum, 65 miles southwest of Cairo, Hagg Hassan had been receiving a monthly pension of 300 Egyptian pounds. But one day, he was given only 250. Hagg Hassan was livid. The budget cut would also apply to his wife and widowed daughter—a loss of 150 pounds for the household. Hagg Hassan lit a cigarette and asked his daughter to write a petition. He presented the petition to the parliamentarian who at the time represented his constituency, a member of the Freedom and Justice Party (FJP), the political arm of the Muslim Brotherhood. Nothing was done. A few months later, after the presidential elections in which the Brotherhood’s Mohamed Morsi was elected, Hagg Hassan went to Cairo with other villagers to submit a collective petition to the presidential palace’s grievance office in Nasr City. Again, the demand fell on deaf ears. After their tenth visit to the palace, Hagg Hassan and his neighbors mourned the failure of the January 25 revolution.

Such actions contrast with depictions of rural citizens as passive and counter-revolutionary. Indeed, analysts and secular political players have agreed that when it comes to ballot boxes, “the countryside has acted as a bulwark, or strategic reserve for the counter-revolution.”[1] They back their arguments by tightly linking voting preferences of rural citizens to patronage and clientelistic networks, rather than “politics.” These links show rural dwellers’ systematic support for those in power—be it the Muslim Brothers, the former National Democratic Party, or, more recently, the military. But what does voting mean for rural dwellers? And how is it linked to their views of “politics” and their experiences of “citizenship?”

Rural dwellers’ perceptions of voting and politics can be seen in how they view “counting” as both a technical and a political process. Villagers use two meanings of “counting” when they speak about casting a vote: 1) voting to be counted; and 2) voting as if one counts. These two usages form the basis of a differentiated citizenship between paperwork (the technical act of vote-counting) and lived reality (the state’s political responsibility to consider citizens’ needs beyond elections).[2]

In public debates, many analysts have attempted to understand voting behavior in spatial terms, particularly the rural-urban divide. Yet Ab’adeya’s case shows the importance of temporality as a way to explain shifting views on elections. Essentially, the value of voting, as a significant political practice, went through several phases among residents of Ab’adeyet. Prior to and during the electoral season, the hope to be counted as rightful citizens impacted the ways in which voters experienced elections. However, with the failure of Egypt’s electoral transition to achieve the revolutionary promises of bread, freedom, and social justice, villagers’ opinions about voting have changed; hope was substituted with disenchantment and despair. Simply put, the villagers were once again reminded that they are deprived of substantive citizenship rights.  Ultimately, this has resulted in producing a rather cynical political culture, with limited trust in the world of “Politics.”

In early November 2011, voting was tied to a normative understanding of liberal democracy, which includes multiple parties contesting in a game whose end is unknown. The 2011/2012 parliamentary elections were heralded as the first free and fair elections in the country’s history. Similar to other contexts of regime transitions, elections were a means to feed a deep desire for democracy among citizens who had been subjected to dictatorship for decades.[3] Research on the Basque country, in northern Spain, shows that following 40 years of dictatorship orchestrated by General Francisco Franco, democracy became an “object of desire” that gained power from its fetishized nature. This fetishization is primarily produced via a discourse that de-links the current government from the old regime, even if the former includes elements of the latter.[4] Sadly, in Spain this situation resulted in legitimizing a discourse of various authoritarian state practices within the new government.[5]

In Egypt, to act as if democracy “works” and to legitimize elections for the populace, an overemphasis was directed toward practical procedures within the electoral process.[6] A central procedure to guarantee such legitimacy was publicly displaying vote-counting so that every single voter could see that s/he matters. Television sets in most households aired the counting process in different governorates, and many residents actually attended the counting process held in the nearest town, Ibshway. For the villagers, elected parliamentarians are mediators between them and the state. Residents of Ab’adeyet were eager to hear the results in order to identify a person to whom they could address their grievances, hoping that they could be heard by the state. During this short period, despite the persistence of clientelism, the gap between the technical and political meaning of “counting” was reduced; voters felt that their signatures or fingerprints were not simply ink on paper, but some step toward joining a political community that held the government accountable for achieving the revolutionary promises, even if in the long term.

But the long term was too long to endure. Like in post-Franco Spain, the “new” regime promised by the Muslim Brotherhood relied on the basic structure that had embodied the Mubarak state—the army, the police, and the bureaucracy—such that they remained largely unchallenged. For example, the Morsi government appointed Ahmed Gamal Eldin, chief security officer of the Assiut governorate under Mubarak, Minister of Interior, and General Mohamed Raafat Shehata, who previously served in the intelligence service, was appointed Director of the Egyptian General Intelligence Directorate. Muslim Brotherhood figures took over ministries and advisory positions. Despite concrete proposals offered by human rights and activist groups to cleanse the police apparatus, Morsi set no measures. Moreover, state-orchestrated torture, detentions, and killings were practiced as usual. And though Morsi’s renaissance project and the Brotherhood election program championed a “corrupt-free” version of the neoliberal agenda, previously adopted by the National Democratic Party (NDP), the result was only the continuation of high rates of unemployment, underemployment, and poverty.[7]

Consequently, political mobilization was on the rise.  A recent Egyptian Center of Economic and Social Rights report shows that the total documented number of protests in 2012 reached 3,817, exceeding all protests between 2000 and 2010 by 500.[8] Accordingly, in the aftermath of the parliamentary elections, regular protests occurred in Fayoum. Demands were pinned to the “new” state and its politicians and centered on agrarian resources, security, pension plans, potable water, education, price inflation, and service cuts. Ministers, however, were “too weak” to take action, according to many villagers, and the parliament was unable to pass legislation relevant to the rural constituencies. In June 2012, the Supreme Court dissolved the parliament. Some residents did not care, while others felt shocked. They thought the money allocated for elections should have been spent on their needs.

The excitement over the parliamentary elections was replaced with a sense of skepticism and despair about politics. Six months after Morsi was elected, on a day when Ab’adeyet residents were tirelessly fetching water following one week of water cuts, most people were voicing dissatisfaction with the performance of the FJP and expressing regret for voting for its candidates. Multiple residents—the same ones who had previously spoken of the importance of political participation—said that from day one they knew that the elections would not make any difference. “This is politics, after all,” they said. When Hagg Aly, a farmer, was asked, “Why did you vote if you knew that elections do not matter?,” he said that he had been acting “as if he mattered as a person.” This self-expression of worth made the act of voting personal, far richer, and more complex than a simple transaction with the state. It rendered the electoral process “a rare opportunity of egalitarianism that has a leveling effect,” since the corrupt world “is not allowed to exhaust all meanings of the political.”[9]

But this analytical framework is subject to manipulation by radical politicians. The Muslim Brotherhood repeatedly claims that it was elected as a result of a truly democratic procedure; hence its leaders should gain political power. Such politicians believe that under the banner of “democracy,” the fetishized ballot box glosses over the pledges they made to their constituents to address, for instance, deep socioeconomic inequalities. The idea of electoral legitimacy was heavily at play during the latest national mobilization that took place on June 30, 2013 and resulted in toppling Brotherhood leader Morsi and the return of military rule. In his speech, Morsi objected to the termination of his presidency on the basis of his legitimacy as an elected president. In fact, the word “legitimacy” appeared 56 times in his 46-minute speech. It was indeed a moment in which the Muslim Brotherhood publicly declared that Western liberal democracy, and what it entails from the sanctity of the electoral box, is key to the existence of an Islamic rule.

After the 2011/2012 parliamentary elections, Ab’adeyet residents thought, or at least hoped, that they “counted” in the “new” political order, in both the literal and metaphoric sense. They soon realized that liberal democratic ideals do not guarantee their metaphoric importance; they are, as many put it, only “ink on paper.” Consequently, they have to fight for their rights through means other than the ballot box. A main consequence of the ousting of Morsi is an increasing ambivalence vis-à-vis electoral politics. On the one hand, few of the villagers are happy with the toppling of Morsi as a result of popular pressure backed by a “beloved” military. This, for them, sends a message to any upcoming president: “If you do not deliver, you will be kicked out.” Others are concerned that the ousting of Morsi will result in the return the Mubarak state, which they ironically never perceived as vanishing. A third group consisting of avid Brotherhood supporters joined other angry citizens in Fayoum and beyond. Many members of this group escaped from the village, fearing that they would be detained.

It is difficult to judge whether and to what extent voting will lose its value as a citizenship ritual in Egypt’s next elections. Perhaps it is the aspiration to be counted (rather than to count) that will continue to mobilize the masses to the ballot stations and beyond.

[2] Ethnography orients this analysis, which emerges from 11 months of ethnographic research in Ab’adeyet Wally Mizar, from September 2011 to April 2012 and February to April 2013. My methods included participating in everyday village life, conducting interviews with rural and urban dwellers, attending rallies in different villages throughout the constituency, and compiling Arabic and English-language newspaper articles and relevant documents.