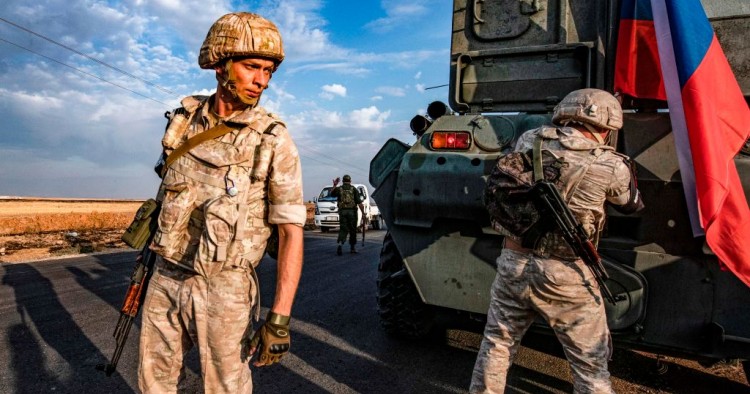 Russia’s ability to control the pace and scope of developments in Syria has been a moving target ever since its intervention four years ago. At varying times, Moscow has found itself both firmly in the driver’s seat and a helpless bystander — the latter most vividly illustrated by events such as the regular Israeli airstrikes on Russia’s Iranian and Syrian regime allies

On the other end of this spectrum, Moscow spent most of 2016 and 2017 successfully directing the thrust of operations by pro-regime forces, a process that saw government troops recapture Aleppo city by the end of 2016 and then focus their efforts on reclaiming ISIS-held territory across the country’s center and east the following year. The ability to commit sufficient Syrian forces for the latter was enabled by Russia’s brokering and maintaining of ceasefires between rebel and regime forces in the country’s west, under the so-called “de-escalation zones.”

Central to this strategy was the ground element: Russia’s military police. Drawn primarily from the Sunni Muslim republics of Russia’s North Caucasus, three or four battalions of military police have served continuously in Syria since early 2017. Military police have been on the frontlines of all four de-escalation zones, maintaining a general ceasefire in each, as well as deploying to other hotspots in Syria’s south and north. These units have now been called upon for their most difficult deployment yet: implementing the Turkish-Russian agreement over the division of territory in north Syria and effectively drawing a line in the sand for Ankara’s forces engaged in clearing out the Kurdish-led Syrian Democratic Forces (SDF) and People’s Protection Units (YPG) as part of Operation Peace Spring.

Following the launch of Operation Peace Spring on Oct. 10, Russia found itself uncomfortably sidelined as Turkish units and their Syrian rebel proxies swept across the border and into northern Syria. Russia had always strived to maintain good relations with Syria’s Kurds, primarily the leading YPG/Democratic Union Party (PYD), and to push them further toward cooperation and reconciliation with the Assad regime. About two weeks after the launch of the Turkish operation, on Oct. 22, Moscow and Ankara signed an agreement delineating the scope of Turkey’s agreed control, affirmed by a map released by the Russian Defense Ministry the following day. The central part of Turkey’s 30-km-deep “buffer zone” was to remain in Turkish hands, while joint Russian-Turkish patrols would be carried out in a 10-km-deep strip running along the Turkey-Syria border to the west and east. Russian military police and Syrian border guards were to “facilitate the removal of YPG elements and their weapons” from the areas immediately beyond the joint patrol zone.

Initially, things seemed to go as planned. Recognizing that this operation would be much more fraught with potential danger than previous taskings, Moscow took the unprecedented step of bolstering its military police contingent in Syria, sending an additional battalion from Chechnya on Oct. 25 to supplement servicemen already in the country. They also received a new shipment of armored vehicles, providing them with more heavy equipment than they had ever had previously. Military police units soon deployed to the city of Kobani, the scene of a massive battle between ISIS and Kurdish forces (backed by U.S.-led coalition airpower) in 2014, as well as Qamishli in the far northeast. The first joint Russian-Turkish patrol took place near Darbasiyah, about 40 km west of Qamishli, on Nov. 1, followed on Nov. 5 by a second joint patrol closer to Qamishli itself.

Despite the Kremlin’s best PR efforts, however, it was apparent not everything was going to plan. In the chaos following the U.S. pullout from the northeast and Turkey’s sudden invasion, Syrian regime forces had taken up positions in a number of Kurdish-held cities after being invited in by the YPG. Even following the Russia-Turkey agreement, Turkish-backed forces continued to advance on one of these locations, Tal Tamar, killing a number of regime troops thrown into a hasty defense of the city. Fighting between Syrian government and Turkish forces has also occurred near the city of Manbij. The locals, too, are restless: Turkish-Russian patrols have had rocks thrown at them by civilians on at least two occasions, one of which ended with Turkish forces opening fire on the unarmed protesters.

For Moscow, such events risk undoing the image it has carefully built up around its military police and their effectiveness at both preventing conflict and building bridges with locals. For all the suffering later inflicted on the populace by the returned Assad regime, Russian military police units proved remarkably successful in preventing full-scale conflict from re-erupting in the East Ghouta, north Homs, and south Syria de-escalation zones in 2017, effectively freezing those conflicts until a time of their choosing. The Dagestani, Chechen, and Ingush servicemen in the battalions, meanwhile, have won praise from local Syrian Arab civilians for both their willingness to engage in familiar Sunni Muslim prayer rites and to prevent abuses by Syrian regime forces. In this scenario, the current belligerent response by civilians presents a new and unfamiliar challenge for Moscow. The Kremlin appears to be at a loss about how to handle such setbacks: Russia deployed attack helicopters on patrol in the border area on Nov. 13, itself another unprecedented move for Moscow’s policy in Syria, but these will be of little use in quelling civilian unrest.

It is of course impossible to predict the future here, but it seems very likely that Moscow has finally bitten off more than it can chew in its Syria ceasefire-keeping operations. Separating regime and rebel soldiers, or even patrolling an inactive Turkish-Kurdish frontline is one thing; pacifying an active war zone and preventing the outbreak of a full-blown insurgency is another. Moscow’s decision to pull back from Afrin in northwest Syria when Turkey launched its military operation there in January 2018 now appears to have been a prudent move, one that recognized the limits of Russia’s abilities in Syria. It would have been much more difficult politically to simply abandon the northern Syrian border zone in this case, however, and to effectively cede control of the entire northeast to Turkey, usually Russia’s junior partner when it comes to Syria decision-making. Questions that have not been answered yet include the ultimate fate of major cities such as Manbij and Qamishli, which both Moscow and Ankara desire to see in their sole sphere of influence. Whatever comes next, it is certain that Russia’s military police have their work cut out for them in north Syria.

Neil Hauer is an independent analyst focused on Syria, Russia, and the Caucasus. Based in Tbilisi, Georgia, he served as senior intelligence analyst at The SecDev Group, an Ottawa-based geopolitical risk consultancy, for three years. He is presently engaged primarily on Russia’s role in the Syrian conflict. The views expressed in this article are his own.