What will a Future Kurdish State Do with its Own Minorities? 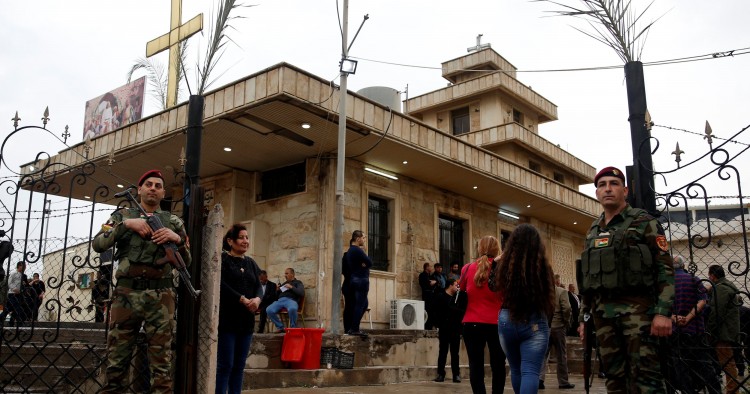 The Kurdistan Region of Iraq (K.R.I.) is expected to hold a referendum on independence from Iraq on September 25. While the disputes between Kurds and Iraq’s Sunni and Shiite Arab populations will be a key factor in any independence process, the realities of building a Kurdish state in northern Iraq will be made more complex by the enormous ethnic and religious diversity in the region.

The K.R.I.’s three recognized governorates (Erbil, Dohuk, and Sulaymaniyah) are predominantly Kurdish, but the region is also home to an array of different minority groups. It, and other areas controlled by the Kurdistan Regional Government (K.R.G.) include the majority of Iraq’s Christian populations, almost all of the Yazidi community, Shiite and Sunni Turkmen, Shabak, Kaka’i, along with adherents to Zoroastrianism and very small populations of Sabean Mandeans and Baha’i.

These populations reside within the K.R.I.’s “official” borders, in part due to the region’s rich cultural heritage and partly because of its long-held reputation for tolerance toward minorities. Domestic migration to the K.R.I. has increased since 2003, enriching its ethnic and religious diversity. ISIS’ campaigns have accelerated the trend, and the K.R.I. has become a destination of choice for Iraqi civilians escaping extremism.

The diversity of populations falling under K.R.G. control has also increased following significant land grabs by peshmerga forces since 2014, which saw K.R.G.-held territory grow by up to 50 percent. During the fight against ISIS, the K.R.G. took de facto control of large parts of the so-called “disputed territories” from Iraq. These territories are lands where ownership is claimed by both the K.R.G. and the Iraqi federal government, including the Sinjar and Nineveh Plains regions of the Nineveh governorate, parts of Salahuddin and Diyala governorates, and the city and governorate of Kirkuk.

The disputed territories are especially diverse. The Nineveh Plains are home to significant numbers of Christians, Shabak, and Yazidis. Sinjar district is a major Yazidi heartland (and the location of ISIS’ 2014 Yazidi genocide). Kirkuk and its governorate comprises large populations of Sunni and Shiite Turkmen, as well as Christians and Sunni Arabs. If these areas are incorporated into Kurdistan, Kurdish authorities will be responsible for administering a much more multicultural (and less homogeneously Kurdish) population.

Figures 3 and 4 - Post-ISIS Ethno-Religious Distribution of I.D.P.s in Northern Iraq 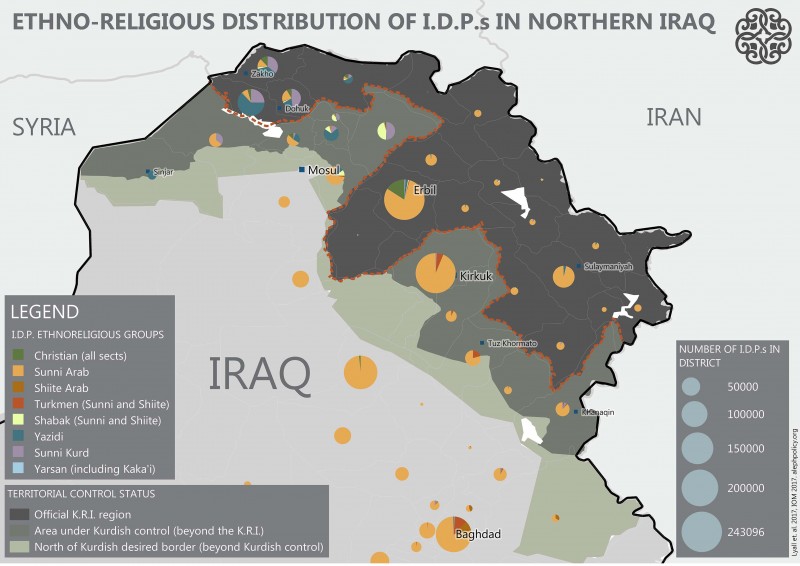 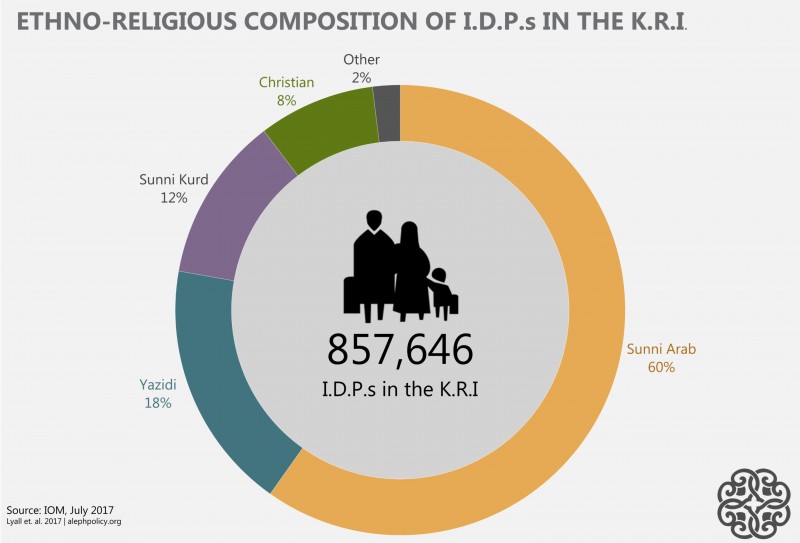 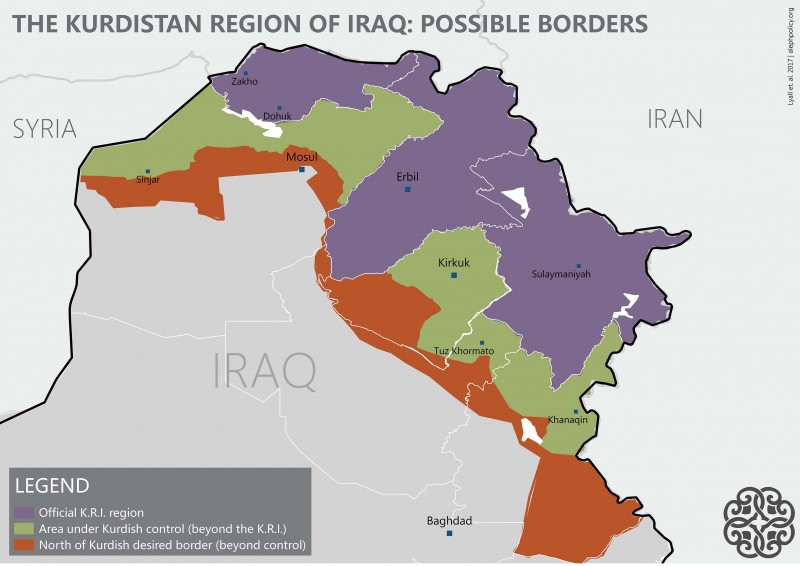 While Kurdistan has been a haven for otherwise at-risk minorities, such rapidly changing demographics may threaten a continued policy of tolerance. Reports have emerged of practices by Kurdish authorities targeting minorities, and certain ethnicities already face difficulties living under Kurdish rule.

Sunni Arabs, a large percentage of internally displaced persons (I.D.P.s) living in the K.R.I., have been discriminated against, and are reported as more likely to experience limitations on their freedom of movement than other groups. Harassment by officials and some Kurdish civilians as well as discriminatory hiring practices are also alleged, possibly due to perceived connections between Sunni Arabs and ISIS.

Meanwhile, attempts by Kurdish authorities or political parties to dominate newly held territories have adversely affected minority communities. Many reports exist of populations displaced during fighting not being allowed home, despite Kurds being authorized to move in. The K.R.G. denies malpractice, arguing variously that these incidents are safety precautions, or the result of  wrongdoing by the displaced persons. Nevertheless, allegations of forced displacement and property destruction by Kurdish affiliated forces abound.

Where minority communities won’t submit to K.R.G. rule (or the area’s dominant Kurdish political party), local leaders have been forced out of office and replaced by party loyalists (often of a different ethnicity), as happened last month to Christian communities in the Nineveh Plains. In Sinjar, Kurdistan Democratic Party (K.D.P.) controlled forces orchestrated a blockade on the majority Yazidi region, preventing basic supplies from entering or leaving. Entire families have been deported in retaliation for individual family members supporting Yazidi movements opposing K.D.P. control of Sinjar.

With many communities already on the brink of survival, any victimization or discriminatory practices by dominant powers risks destroying one of the world’s most culturally diverse areas. But in addition to harming vulnerable ethno-religious groups, there’s a risk that increasingly heavy-handed approaches to minorities in Kurdish-held territory could lead to unrest or conflict. Sinjar is already host to a multi-party political struggle between various Kurdish forces competing with one another, including the P.K.K., in addition to Yazidi militias. More dramatically, conflict boiled over last year in Tuz Khurmatu, a largely Shiite Turkmen town partially controlled by Kurdish peshmerga. Clashes between Kurdish forces and Shiite militias left dead on both sides.

The chance of larger scale unrest is greatest in Kirkuk, a governorate divided between Kurds, Turkmen, and Christians. Sunni Arabs also make a sizeable portion of the population, especially in the wider governorate, and with ISIS still in control of nearby Hawija, many remain displaced. The city of Kirkuk itself holds special significance for both Kurds and Turkmen, and all these factors when combined with the area’s considerable oil wealth makes Kirkuk a potential flashpoint for yet more sectarian conflict.

Already, tensions between Kirkuki factions are close to breaking point, and political maneuvering may worsen ethnic fault lines. Since losing de facto control of Kirkuk in 2014 to the Patriotic Union of Kurdistan (P.U.K.), a major party of the K.R.G., Baghdad has repeatedly demanded the K.R.G. withdraw. But Erbil has refused, and Kurdish leaders have suggested the possibility of armed conflict. This week, Kurdish authorities moved to include Kirkuk in the upcoming referendum, against the wishes of many representatives of non-Kurdish residents. Given the city’s importance and the region’s hydrocarbons, no side is likely to relinquish its claim soon.

As Baghdad and Erbil compete post-referendum and the disputed territories receive increased attention, policymakers’ attention may be drawn to issues like control of oilfields, or the role of outside actors such as Turkey or Iran. But the diverse ethnic and religious makeup of the local populations must not be forgotten, as successful long-term solutions will need to account for the wishes of the various local communities. Failure to do so not only risks more conflict, but threatens the long-term existence of these remnants of Iraq’s diverse cultural heritage. Minority voices must not be drowned out.