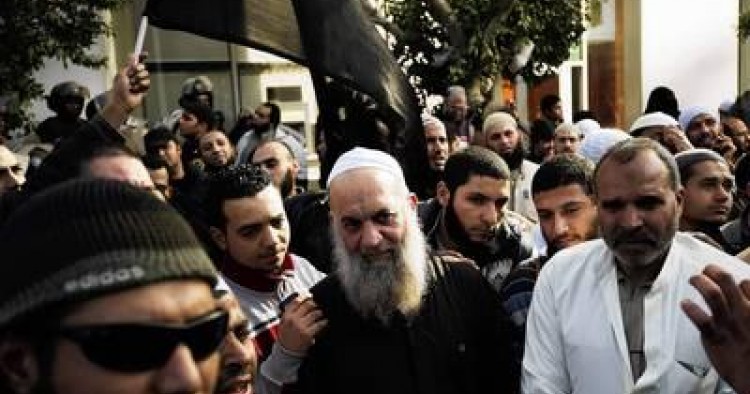 The Egyptian Islamist Mohamed al-Zawahiri is most famous for being the brother of al-Qaeda front man Ayman, but his story is also a gripping one. Zawahiri was arrested in 1999 for his alleged participation in the assassination of President Anwar Sadat. He spent 13 years in Cairo’s Tora prison, where he was tortured by the mukhabarat and did a five-year stint in solitary confinement. He was released in March 2012 when the Supreme Council of the Armed Forces, who ruled after Hosni Mubarak’s ouster, issued a general pardon for scores of political prisoners.

Just six months later, Zawahiri sent a message of peace when he offered to mediate a truce between the West and Islamists through his connections with al-Qaeda, promising cessation of global terrorist activity in exchange for non-interference in Muslim nations.

But Zawahiri’s doings aren’t limited to such an offer. As a leader of an Islamist organization called the Salafist-Jihadists, he is often in the public eye. Yet it is difficult to determine who he leads and what ideology the group espouses—and whether the United States and others should worry about the organization’s activities in post-uprising Egypt.

The group appears to thrive on such ambiguity. Ahmed Ashoush, a fellow leader, claims that the organization does not, in a sense, exist, as it has neither a leadership structure nor a membership count. “We know how wide our support is on the street,” he says, “but we don’t want to talk about it. We want you to see it, in the coming days, if God wills.”

Salafist-Jihadists often define themselves in terms of not what they are but what they are not. The group distances itself from “regular” Salafists through a fierce condemnation of participation in the political process and through its support of armed jihad. Ahmad Zaghloul, a specialist in Islamist groups and the author of The Contemporary Salafi Situation in Egypt, notes that the term Salafist-Jihadist first emerged in the 1990s when Jordanian-Palestinian jihadi ideologues Abu Muhammad al-Maqdisi and Abu Qatada responded to Salafi accusations that they were weak in “knowledge” and had neglected the study of Shariah. As a result, they studied diligently and ultimately came to emphasize the idea that armed jihad is the only way to effect needed change in the Muslim world.[1] These views are in contradistinction to revisionists such as Sayyid Imam al-Sharif[2] and al-Gama`a al-Islamiya,[3] who abandoned their violent pasts.

Zawahiri therefore castigates the Muslim Brotherhood and the Salafists for their immersion in politics, through which they have adopted democracy and joined the international order. He calls them hypocrites and opportunists who have abandoned the Islam of al-salaf al-salih, or the righteous forefathers, in order to curry favor with Western masters. In Salafist-Jihadi view, Western powers installed puppet governments across the region with the aim of dividing the Muslim umma, and they now preach “democracy” to keep this order intact. No matter what rhetoric the Muslim Brothers put forth, to the Salafist-Jihadists they are always in cahoots with America. Ashoush’s views on Morsi are clear: “The legitimate Islamic ruler must bind himself to and judge by the Qur’an and sunna, but Morsi refuses to do so. Instead, he binds himself to the constitution and the law.” He and Zawahiri see Salafists, meanwhile, as quietist tools of state security in league with the army.

For Salafist-Jihadists, it is Islamic scholars who should be ruling. In this idealized vision of future society, these scholars will assert themselves via popular approbation and transform the international order by selecting a leader that will reestablish the caliphate. Through such broad mandates it is unclear how Zawahiri and Ashoush propose to change society in practical ways. When questioned they are evasive, as might be expected from those who operate at the margins of the law.

The only concrete comparisons they make are to, intriguingly, American neoconservatives and German Nazis. Ashoush admires that neocons, through their strong rhetoric, came to dominate foreign policy discourse in the United States, which ultimately changed the international order. As for German Nazis, while the Salafist-Jihadists do not support the content of their movement, Ashoush notes that though they constituted a small band, they came to national leadership through crisis. Following the upheavals of the “Arab Spring,” Ashoush and his colleagues believe that the Salafist-Jihadists are similarly poised to dominate not only discourse but Egypt as a whole.

What is the role of violence in such a plan? Though Zawahiri has a brotherly link to al-Qaeda, there are no official ties between the two movements. And he ostensibly supports a peaceful future, as evidenced by the September 2012 offer to broker a Western/Islamist truce. In addition, Ashoush states that the Salafist-Jihadists “are not preachers of violence” and that he and his compatriots had nothing to do with the September 2012 attack on the U.S. embassy in Benghazi or violence in Sinai, though he praises these activities. He also denies that Salafist-Jihadists carry any weapons in Egypt.

Ashoush prefers to speak of jihad rhetorically as a characteristic of the caliphate to come and a mark of true Islam. As such, his jihad is for the hearts and minds of Muslims, who he believes are subject to severe psychological warfare. For him, it is thus not only the political leaders but society at large that has internalized Western definitions of “moderate Islam,” “gradual application of Shariah,” and “terrorism.” And though the political Islamists have recently gained power, Ashoush believes that they will be undone as their failures and contradictions with true Islam become exposed. Hence terrorism within Egypt would prove counterproductive to Salafist-Jihadi goals.

And yet the movement is historically based on a call for armed jihad. Ashoush is also the leader of Ansar al-Shariah, a moniker the State Department says is a rebranding of al-Qaeda in the Arabian Peninsula.[4] Ansar al-Shariah’s manifesto calls for liberation of Muslim lands, resistance to modern colonialism, and support for mujahideen around the world.

Moreover, Zawahiri and Ashoush’s fellow Salafist-Jihadists don’t have the best track record when it comes to peaceful opposition. Mohamed Jammal Abu Ahmed and Adel Shehato, who Ashoush confirmed as colleagues, are allegedly linked to Benghazi and to extremist groups operating out of Sinai, respectively. And as the Taliban destroyed the Buddhist statues of Bamiyan in Afghanistan, Morgan el-Gohary, who Ashoush also identified as part of the Salafist-Jihadi movement, threatens to destroy the pyramids to ensure that they will never be worshipped in the future as they were in the distant past.[5]

Further, despite severe and public condemnation of Islamists, they are not the real target. “I want to expose secularists for their ideas and principles and what they represent,” Ashoush says. “This is stronger than the sword. If we can erase their legitimacy in the political scene we don’t have to kill them.”

It is tempting to dismiss the Salafist-Jihadists as insignificant in number and full of empty rhetoric. And Egyptians are not about to support the group in large numbers. But the Salafist-Jihadi message of independence from domineering Western hegemony has currency with many, and no matter the group’s following, no one who praises the attack in Benghazi should be dismissed. Through strong and media-heavy preaching, Zawahiri, Ashoush, and their companions may force ruling Islamist powers to pull to the right, lest their earlier, similar rhetoric be exposed as hypocrisy. For now, however, the Salafist-Jihadists remain too far on the margins to generate real concern.