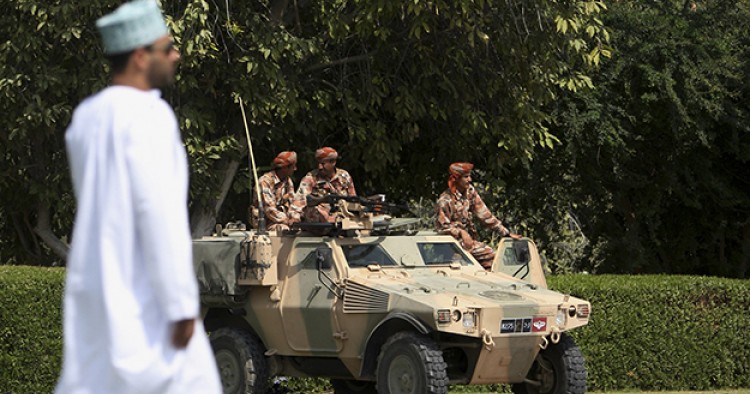 Living on the periphery of the tumultuous Middle East, Omanis do not take their security for granted. Oman has been free of violent unrest since the Sultanate crushed the Dhofar Rebellion in 1976. Yet Oman is situated in a dangerous neighborhood, and the Arab Gulf country is not immune to transregional threats. The possibility of spillover from the war in Yemen, which shares a 187-mile border with Oman, represents the gravest menace to the Sultanate’s security, while the Qatar crisis threatens to fundamentally change the Gulf Cooperation Council (G.C.C.) in ways that would leave Oman worse off.

Officials in Muscat fear that heightened instability in Yemen bodes well for extremist forces such as al-Qaeda in the Arabian Peninsula and the Islamic State (ISIS), which have been able to expand their presence in Yemen amid the state’s collapse. The threat of these actors transiting into the Sultanate’s southernmost Dhofar Governorate is unsettling. At the same time, despite the significant threat posed by potential spillover from the Yemeni civil war, Oman’s leaders have viewed the conflict in their neighboring country as an opportunity to secure Muscat’s close alliance with Washington, and promote the Sultanate’s grander foreign policy vision across the region.

Given the Sultanate’s traditionally neutral and non-interventionist foreign policy, Muscat’s decisions to keep Omani forces out of the Saudi-led coalition in Yemen and not join Saudi Arabia and the U.A.E. in severing ties with Qatar are unsurprising.

Yusuf bin Alawi, Oman’s foreign minister, explained Muscat’s position on Yemen shortly after the G.C.C. intervened militarily in March 2015: “Oman is a nation of peace. We cannot work on peace efforts at the same time we would be part of a military campaign.” A senior member of Oman’s Shura council elaborated further, stating that Oman "couldn't have participated in this coalition. It's in our constitution. We don't send troops or artillery anywhere, unless requested by the United Nations.”

Shortly after the Qatar crisis erupted, Oman offered Doha the Sultanate’s waterways, to bypass Emrati waters and export Qatari gas, and food supplies, to counter-balance the impact of Riyadh’s closure of the emirate’s only land border. Oman has also kept its airspace open to Qatar Airways, which has helped the airline with flights from Doha to Africa.

Though worsening chaos across Yemen has posed a severe threat to Oman’s interests, it has also offered Muscat an opportunity to pursue its geopolitical interests. After the Houthi capture of Sanaa in 2014, Oman sought to use its positive relations with all major parties in Yemen to position itself as a peace broker and diplomatic backchannel among the warring sides. In the grander picture, Oman has sought to strengthen its key alliances by playing its neutral role in Yemen. For the United States, Muscat has helped in various ways, by accepting Yemeni prisoners from the Guantanamo Bay detention facility, negotiating and securing the release of Western nationals held captive in Yemen, and ensuring the safe evacuation of the U.S. diplomatic staff from the U.S. embassy in Sanaa in February 2015.

Therefore, Oman’s top priorities are to help the Yemenis resolve their crisis diplomatically and to reverse the disintegration of a functioning state apparatus. In pursuit of these goals, officials in Muscat have hosted various roundtable talks aimed at finding common ground and areas for compromise between the G.C.C. states, Iran, the United States, and Yemen’s internal actors. Oman has endorsed and fully supported efforts by the U.N. and Kuwait to promote peace talks among the warring actors in Yemen.

According to Arab Gulf interlocutors, Oman and Kuwait have worked in tandem to promote diplomatic solutions to the Yemeni crisis and the G.C.C.’s ongoing rift over Qatar, in which Kuwait’s emir is leading mediation efforts. In February, Iranian president Hassan Rouhani traveled to both G.C.C. states to discuss regional issues and ways to defuse tensions with Iran, underscoring how Oman and Kuwait are serving as diplomatic backchannels between Riyadh and Tehran. With tensions rising between Saudi Arabia and the U.A.E. on one side, and Iran on the other, Oman is likely to feel the heat going forward.

Not all are sympathetic to Oman’s stance on the Yemeni crisis. One Arab Gulf official stated that many in the G.C.C. view Oman’s position on Yemen as “negative neutrality.” Recent reports in the press, citing figures from the G.C.C., Yemen, U.S. military officials, and the Mujahedin-e Khalq, have alleged that Oman is on Iran and the Houthis’ side, and has provided Tehran with Omani land and port infrastructure to help arm Ansarullah.

Regardless of Muscat’s actual role in Yemen, from Riyadh’s point of view, Oman is a link in the chain of Iran’s Shiite/Zaidi allies on the Kingdom’s borders at a time when Tehran is more decisively asserting its regional influence. Following the historic passage of the Joint Comprehensive Plan of Action, early negotiations of which were held in Oman, unbeknownst to Saudi Arabia, Saudi officials worry that growth of Muscat-Tehran relations will undermine the G.C.C.’s collective security from an ascendant Iran.

Signs of Saudi displeasure with Muscat came in December, when King Salman toured all the G.C.C. states with the notable exclusion of Oman. Later that month, however, Oman became the 41st member of Saudi Arabia’s Islamic Military Alliance to Fight Terrorism. Given that Oman was the only G.C.C. state to not join the alliance at its inception one year earlier, the Sultanate’s decision to join raised speculation that Omani officials were determined to placate G.C.C. concerns about Muscat’s growing relationship with Tehran.

There are signs, however, that the Trump administration may not look favorably on the cordial relationship between Muscat and Tehran. After President Trump’s address at the Arab Islamic American Summit in Saudi Arabia in May, the U.S. president held bilateral talks with leaders from each G.C.C. member besides Oman. Deputy Prime Minister Sayyid Fahd al-Said’s planned meeting with Trump was cancelled without any publicly-provided reason. In Trump’s historic speech, he praised all G.C.C. members, save Oman, for their contributions to Washington-led efforts to combatting extremism and terrorism in the Islamic world. U.S. Secretary of State Rex Tillerson also cancelled a meeting in the Saudi capital with his Omani counterpart. While the Obama administration highly valued and relied on Muscat’s “neutral” foreign policy, the Trump administration seems to have a different outlook toward Muscat.

With Saudi Arabia, the U.A.E., and the Trump administration pushing for a tougher stance against Iran, Oman will face increased pressure to abandon its long-held neutrality, which has been invaluable to U.S. interests in the region.