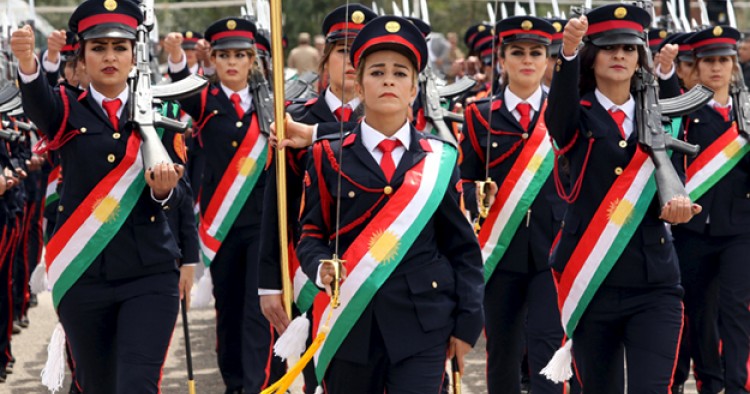 Representatives of the Kurdistan Regional Government (K.R.G.) are currently in the process of shaping the information environment ahead of a desired referendum on Kurdish independence. Aside from a lobbying campaign strongly focused on Washington—the K.R.G. has spent more on lobbying in the United States than Pakistan—leaders have been making provocative statements regarding territorial ambitions.[1] K.R.G. Prime Minister Nechirvan Barzani, also a member of the Kurdistan Democratic Party (K.D.P.), recently noted:

“We will decide the extent of our borders by what has been liberated with the blood of our peshmerga. At this stage, neither Ankara nor Iran will be the deciding factor in Kurdish independence. We will solve the problems through negotiations with Baghdad.” [2]

There is a serious contradiction here, one that is missed in the K.D.P. public relations message that focuses on long histories of oppression, the achievement of democracy and the justification for statehood through mistreatment from Baghdad.[3] [4] Nechirvan’s contradiction is that borders will effectively be drawn depending on the “blood” of the peshmerga, but at the same time, “negotiated with Baghdad.”

Such a negotiation, at present, is far away, as Kurdish forces have been accused of forcibly displacing Sunni Arabs.[5] If this is the kind of border redrawing Nechirvan refers to, observers should be gravely concerned. On the economic front, Kurdish forces have occupied Kirkuk oil fields Bai Hassan and Avana Dome, claiming this was to protect them from ISIS, but then almost immediately sending oil from these fields into the Kurdish export infrastructure. [6]

Today, after the substantial downgrading review of the Kurdish region’s oil reserves and the decline of the K.R.G.’s oil production, the supergiant Kirkuk fields comprise most of the K.R.G.-controlled oil reserves, and disputed territories controlled by the peshmerga are considered as hydrocarbon rich acreages.[7] If anything, oil will shape disputed borders, more than blood.

Sunni Arab leaders in Kirkuk, the disputed province Jalal Talabani called “the Kurdish Jerusalem,” have already raised objections to the province being absorbed into the Kurdish region and may not react well to falling under K.R.G. rule in the absence of a referendum on this disputed territory—long called for under Article 140 of the Iraqi constitution. In fact, Kirkuk’s ancient history and multi-ethnic character makes it more of an Iraqi Jerusalem.[8]

Even if Kirkuk is taken by the Kurds, and Sunnis become restive under their new rulers, it does not automatically mean re-drawn boundaries will make the Kurdish region a free, prosperous and stable ‘state’ with a disenfranchised Sunni minority. It helps when new nations are ethnically homogenous, but history has many examples of new homogenous states collapsing into political violence as well, including, most recently, the Kurdish Civil War of the 1990s.

There are three main reasons for this danger in the Kurdish region, the first being financial, since the region is insolvent and in debt to the tune of $20 billion, or almost five entire years of the region’s annual budget.[9] This makes Kurdish claims of financial independence a myth. The K.R.G.’s deficit is uncontrollable, despite more than $80 billion earned from Baghdad post 2003—effectively, from Basra oil—and around $40 billion in petroleum and non-petroleum revenues earned by the K.R.G. alone. Combined, these income streams are double the income a country like Jordan would have earned in the same period.[10]

The second reason involves prospects for conflict; one internal within the Kurdish region among rival factions, the other external involving its neighbors, and in the worst case, both at the same time. This occurred during the 1980s when some Kurds backed the Ba’athists and others were supported by Iran, which led to the Kurdish civil war of the mid-1990s, when a Saddam-allied K.D.P. almost defeated Talabani’s Patriotic Union of Kurdistan (P.U.K.), who were loosely supported by Iran.

The Kurds enjoyed 12 years of quasi-independence before the Ba’ath regime fell post 2003, but this was a decade that saw warfare between the two ruling dynasties and disputes over oil customs revenues, which are miniscule compared to post-2003 oil revenues.

The vast influx of oil income after 2003, therefore, cemented the pact that divided the Kurdish region into zones of P.U.K. and K.D.P. control. But just as oil income was small in the conflict-dominated 1990s, collapsed revenues are now seeing the P.U.K.-K.D.P. deal fall apart, with the P.U.K. now in an alliance with Gorran, which calls the K.D.P. ‘dictatorial,’ while the K.D.P. have banished Gorran ministers from parliament and accused the party of fomenting violence. This has already pushed the P.U.K. and Gorran to negotiate their own options with Baghdad.[11] With increasingly well-armed peshmerga factions (a point often missed by Western observers who see them as united) and the K.D.P.’s history of violence against opposition, the street clashes of October 2015 could be a harbinger of what is to come as Kurdish opposition groups seek to displace K.D.P. dominance.12]

The third reason relates to political unity and democracy, where the K.D.P. have been accused of arresting journalists and even political assassination, cementing control after the expiry of K.R.G. President Massoud Barzani’s constitutional mandate to rule, which technically ended in 2013. Massoud claims that Baghdad does not share power and resources with the K.R.G., while similarly excluding his own people, such as denying the entry of K.R.G. speaker Yusuf Mohammed of the Change Movement (Gorran) to Erbil’s Parliament. It is almost a year since the speaker has been banished. Massoud also expelled Gorran ministers in the government.

Massoud has failed to change the Ba’ath legacy, and has pursued similar methods to establish his authoritarian rule, instead of bringing true democracy and justice. This is perhaps unsurprising, given his temporary alliance with Saddam Hussein in 1996, which led to the deaths of C.I.A.-supported opposition, as well as many Kurds.[13]

After 2003, there was hope among Iraqis that their nation could become an Iraq for all, not defined by sect, ethnicity, political party or single ruler. At the current time, and under one ruler and two dynasties, statehood for the Kurdish region cannot solve the people’s grievances, any more than other rentier states in the region have done.

What is needed is a serious attempt by Baghdad and the Kurdish rulers to address the grievances of Kurds, and all Iraqis. The main problem in Iraq is a governance model that is characterized by mismanagement, a lack of decentralization, and corruption. Centralism defined Iraq for almost a century. Calls to confederate Iraq require radical constitutional reform, which will take years of negotiation if not challenged by international powers,[14] while the implementation of federalism has become an ‘on paper’ aspiration ever since the referendum on the 2005 Iraqi constitution. The federal model should be given a chance to be tested.

Iraq and its Kurdish population face many challenges in a difficult region. The alternative to a decentralized, but strong federal Iraq could be the nightmare of intra-Kurdish conflict, only this time more complex than the mid-1990s, influenced by a broken Syria, an increasingly unstable Turkey and an Iran with an uncertain future. Such a disaster could make Kurdish factions hostage for years, and must be given strong consideration.

[10] Out of the $700 billion that Iraq earned since mid-2003 until end of 2015, the K.R.G. enjoyed 11.5 percent ($80.5 billion) net after deducting federal sovereign expenses, or 17 percent ($119 billion) of the overall budget, should we calculate sovereign expenses allocation that covered regions and provinces such as defense/peshmerga. This is according to the Federal Ministry of Finance budget calculations.

As for the local revenues in Kurdistan, the K.R.G. is dominated by K.D.P. controls and they have failed to be transparent with their own parties as well as with the federal government, hence the political struggle at regional and federal levels. The total estimated revenues within the K.R.G. varies between $33 billion to over $40 billion. This is a reference by Gorran: http://sotkurdistan.org/index.php/2016-01-22-18-25-53/2016-01-26-17-41-31/item/5774-33. Also see this ref of $14 billion revenues from oil only in 11 years, but if you add revenues of gas, electricity, customs and Oil PSA signature bonuses then the number could easily go over $35 billion.