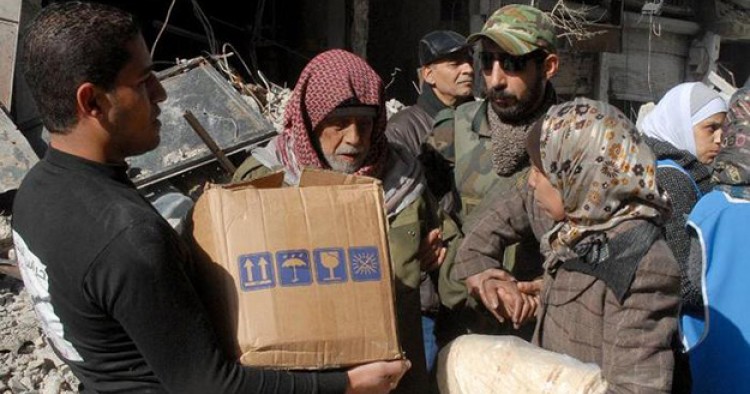 In most wars combatants wield aid as a weapon, circumscribing humanitarian access and impeding assistance to civilians in enemy-held territory, hoping that hunger will starve resistance into submission or undermine the morale of foes. In no war is this truer than in Syria, where the horror of a prolonged vicious conflict has been compounded by aid being held hostage to politics and combat. The lack of adequate medical care, food, and shelter has added to the death toll and misery that has made Syria the world’s worst humanitarian catastrophe this century.

More than two million Syrians have fled the war-battered country, nearly seven million have been displaced by the fighting, and three-quarters of the population are expected to be in urgent need of humanitarian aid this year. The greatest worry concerns the approximately 250,000 civilians trapped in parts of Aleppo and Homs and in rebel-held outlying districts of Damascus. There are reports that starving people have been resorting to eating grass.[1]

On the eve of the U.S.-Russia brokered Geneva 2 summit, UN agencies, among them the United Nations Relief and Works Agency (UNRWA) and World Food Program (WFP), as well as NGOs, launched a three-day social media campaign generating more than 31.6 million “impressions” and reaching tens of millions around the world, demanding that the parties to the Syria conflict allow aid to flow to Yarmouk, the besieged Damascus neighborhood home to 160,000 Palestinian refugees.[2]

Among the supplies advocates are desperate to get into Yarmouk? “Powder milk formula for babies, polio vaccines for infants, and basic foodstuffs, all of which in the present circumstances must be considered life saving,” says UNRWA spokesman Christopher Gunness.

Possibly with an eye to the then upcoming Geneva conference, the Syrian government relented a bit and allowed UN and partner agencies some access to Yarmouk from January 18. But a week later Gunness complained that what humanitarian aid had been allowed fell far short of what is needed.[3] Then, on January 30 Syrian authorities allowed another aid convoy into Yarmouk containing 900 food parcels, but UNRWA officials again said that more is needed "because the numbers of those needing assistance is in the tens of thousands."[4]

Outside pressure to allow unimpeded access to Yarmouk and other areas has been matched this week by diplomatic efforts at Geneva 2. UN officials focused the first face-to-face meetings between the Syrian civil war foes on aid, both as a confidence building measure and as a way to try to clinch deals on assistance, local ceasefires, and prisoner exchange. The strategy was a bid to avoid humanitarian aid being delayed by the tougher political negotiations that few observers believe will result in any peace agreement in the near future.[5]

But progress on humanitarian aid was elusive as the delegates headed into the final days of the summit.  Even an aid convoy for Homs that looked a possibility when the summit started was in doubt by week’s end, with Syrian authorities insisting that it  would only be permitted access if they could be satisfied that no aid would find its way into the hands of rebels.

Western diplomats are now discussing whether they should seek a resolution at the UN Security Council calling on the warring sides to allow access for humanitarian relief. The resolution would be nonbinding, which should persuade Assad’s ally Russia to refrain from vetoing it.

But whether any Security Council resolution would be adhered to remains to be seen.  For that to happen, mindsets will have to change, and there are few signs of that happening. At Geneva intransigence and unrepentant animosity were in abundance.

The pattern of the past provides a roadmap of what is likely to continue to happen with humanitarian aid in the coming months. Both Assad’s government and many rebels, particularly the al-Qa`ida-linked groups the Islamic State of Iraq and al-Sham (ISIS) and Jabhat al-Nusra, have manipulated aid, allowing it through to reward friends or blocking it to punish foes.

Exasperation—even despair—at the manipulation is beginning to show among UN officials on the ground. “In January we reached 4.25 million people with food supplies but there were another quarter of a million who are in desperate need and we couldn’t get to them,” says Muhannad Hadi, WFP Regional Emergency Coordinator for Syria. “It isn’t that we don’t have the means. I have 190 staff here. We have the food and we have the security.”[6]

From the start of the conflict three years ago next month the Assad government has controlled the distribution of aid for its own ends, restricting access to war-torn areas, refusing to permit UN agencies or NGO partners from moving supplies across the northern border with Turkey into rebel-held areas on pain that they will be thrown out of Damascus if they do so.

Such control has allowed the regime to deny aid going to the opposition, as well as allowed it to weather the storm. Opposition activists complain that by abiding by the government’s strictures the UN has in effect allowed aid to be used as a weapon against them.[7]

Last year, $500 million of UN relief funds were channeled through government-approved organizations working inside Syria, including the Syrian Arab Red Crescent, with Syria’s foreign ministry and other government departments determining where the aid would go. The move prompted an outcry from the opposition and some NGOs.

UN officials say that they are caught between a rock and a hard place. Either they fall in line and help millions, or they don’t and all assistance would be endangered and the suffering would be worse. UN officials have battled the Assad government’s restrictions. Last summer in Damascus, the WFP’s executive director, Ertharin Cousin, confronted Assad aides on the issues. “In the meetings my message was a very direct one…that we must have access, and [that] we need the government to ensure that they do nothing to impede our access, nor should anyone in the opposition do anything to impede our access,” she says.[8]

Though Cousin came away from the meetings believing that she had made headway, having secured promises of free access from government officials, the promises were not fulfilled. According to the WFP’s Hadi, nine large food convoys were allowed into Syria in November, but in December only two UN aid convoys got in after the government rejected three and safety concerns stopped another two. In Qamishli, in the Kurdish-controlled northeast, UN-supplied polio vaccinations were not being permitted due to Syrian government interference.[9]

Of course, some rebels are using these tactics as well. “Whenever you have a crisis that goes on this long, there’s fault to go around on all sides,” says Cousin.[10] The jihadi groups ISIS and al-Nusra have proven particularly difficult, blocking and restricting aid, turning it back, or looting it and then distributing it themselves in a bid to burnish their credentials among local communities.

With ISIS and al-Nusra designated as terrorist organizations by the international community, UN officials are not allowed to have direct contact with the groups’ leaders and must rely instead on “foreign governments”—presumably Gulf ones—to intercede. UN officials have also tried to get other rebel groups to negotiate with the jihadis.[11] Islamist rebel brigades have proven difficult as well, taking credit for allowing or delivering UN-supplied food.

Syrian presidential adviser Bouthaina Shaaban told the BBC on January 26 that it was not the Syrian government preventing aid and medical assistance from reaching people, but "terrorists who are holding civilians as human shields.”[12]

Yet the rebels’ abuse is not on the same scale as that of the government and isn’t affecting the same numbers, as was made clear in a confidential report submitted by the UN’s humanitarian chief Valerie Amos to the Security Council on January 24.

Amos has also said that there has been little improvement on humanitarian access since world powers urged the warring sides in October to grant greater entrée to aid workers and convoys.

“We have made some modest progress on administrative hurdles…things like visas for staff and arrangements…in terms of clearance [for convoys],” Amos told Reuters. “But on the really big-ticket items, like protection of civilians, demilitarization of schools and hospitals, access to besieged and hard-to-reach communities, there has been little or no progress at all.”[13]

Amos will brief the Security Council in mid-February, but it remains unclear whether she will ask for the tough resolution on aid access. Even if she does, and Assad ally Russia doesn’t veto it, who will enforce it?

[3] Gunness wrote, “The Agency is extremely disappointed that—at this point—the assurances given by the authorities have not been backed by action on the ground to facilitate the regular, rapid entry into Yarmouk of the substantial quantities of relief required to make a difference to thousands of civilians, who are suffering from malnutrition and hunger, while enduring deplorable humanitarian conditions.” Email to author, 28 January 2014.