The Algerian Elections and the Status Quo 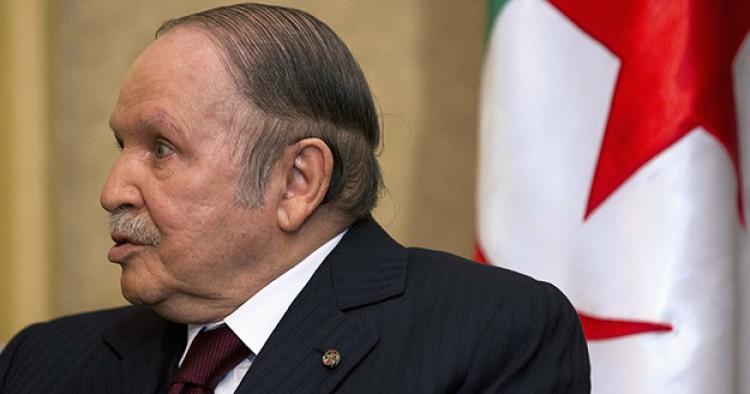 As in many other authoritarian regimes in the region, the Algerian elections are not meant to facilitate a change of leadership through voting, but are merely a vehicle to give some token electoral “legitimacy” to the regime’s candidate. Disqualification of opposition candidates, administrative and financial hindrances, backroom deals, and political cooptation, as well as media control and poll fixing, have been the most common electoral tropes in Algeria since the mid-1990s. After gaining the favor of various political and military factions within the regime at the end of that decade, Abdelaziz Bouteflika was duly and unsurprisingly elected and reelected president for over ten years (in 1999, 2004, and 2009). Having weathered the storm of the Arab uprisings reasonably well, the Algerian regime saw no reason to change its winning formula for the 2014 presidential elections.

Fate, however, decided otherwise. On 27 April 2013, President Bouteflika, now 77, suffered a serious stroke and had to be flown to a Paris hospital, where he stayed for several months. As his recovery was longer than expected, and with him barely able to talk or move, the official and unofficial machinery of the regime continued to govern the country in his name. As the official end of the presidential term approached and there was no visible significant improvement in Bouteflika’s health, the question of what to do for the April 2014 elections began to generate tensions within the regime between those who wanted to keep the ailing Bouteflika for a fourth term in office and those who wanted to replace him.

Uncharacteristically for Algeria, some of these internal disagreements were aired in public at the beginning of 2014 when various military officers and leaders of the main pro-regime party, the FLN, began to blame each other for the poor governance of the country. FLN leader Amar Saadani openly criticized the head of military intelligence Mohamed Médiène (also known as Toufik) for his political meddling and for undermining Bouteflika and his ally, Defense Vice-minister General Ahmed Gaid Salah. Eventually, such public expressions of dissent from within the regime were put to rest by a well-publicized plea for appeasement written by the president.

Importantly, however, the advocates of a fourth Bouteflika presidency are not, as it may first appear, staunch supporters of the president. Instead, they are the regime’s actors and factions who currently benefit the most from the president’s incapacitation. Their opponents are, by contrast, those who would benefit from a redistribution of power and privileges within the regime. In the end, since the different factions of the Algerian regime could not agree on a replacement for Bouteflika, the status quo was endorsed by default. Beyond such tactical considerations, the development of the political situation makes Algeria all the more notable in the region, as it embodies a form of authoritarian governance without a recognizable authoritarian leader.

The April 2014 presidential elections in Algeria will undoubtedly entrench the status quo in the country. Algerian voters and an even larger number of non-voters know that the political system and the regime’s policies will not change as a result of the election. Most of them have already given up on electoral politics, and the lackluster 2014 electoral campaign of a phantom candidate is unlikely to make them change their views.

For the regime, this continuing depoliticization of the citizenry is most welcome. From its perspective, the election of an ailing Bouteflika ensures that the electorate will not disturb backroom negotiations to select a new figurehead for the country. In this way, the Algerian regime avoids the risk of a “color revolution” scenario, in which the candidate of a regime is challenged by a credible opposition candidate and the rigging of elections triggers a revolutionary protest movement.

Algeria’s main opposition forces, increasingly wary of the manipulations of the elections, have for the most part decided to stay out of the contest, thereby strengthening the call for boycott by parties ranging from the Islamists of the Movement of Society for Peace (MSP) to the Berberists of the Rally for Culture and Democracy (RCD), and by the social movement Barakat (“enough”). Since only the leaders of micro-parties and FLN dissidents are running against the incumbent president, the (real) level of abstention much more than the elections results is an indication of the depth of political discontent in the country.

By engineering another electoral victory for Bouteflika in April, decision-makers within the regime give themselves time not only to find a suitable replacement but also to entrench the legitimacy of this new spokesperson. In the months to come, the much talked about but as yet to be created position of vice president is likely to be filled and will de facto inherit many of the prerogatives of an incapacitated president. The vice presidency is likely to become the main launching pad for the regime’s next presidential candidate, regardless of whether the Bouteflika presidency runs its full course or not. By then, this person will appear as the “natural” leader of the country and his election to the presidency can be as smoothly orchestrated as before.

The calculations of authoritarian leaders are of course never entirely accurate—if they were, regime change would be unlikely to ever happen. Algeria is, and will remain after the elections, a troubled polity. The regime may now benefit from having a weak and divided opposition, as well as possessing substantial oil and gas rent to distribute to disgruntled Algerians, but this situation will not last for long. Crucially, the main post-electoral challenge for both the regime and the opposition will be to find a suitable political leader or coalition with credible popular appeal—a role that former FLN leader Ali Benflis, the main challenger in the April 2014 election, does not play convincingly. Only such a new political elite will be able to tackle both the need for democratization of the regime and for good governance in the country. Unfortunately, at this point in time, this quest remains elusive.