Bahrain’s Elections and the Opposition 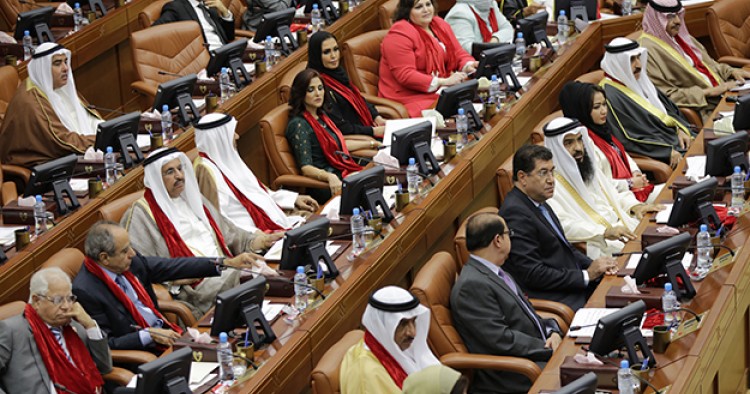 As Bahrain’s newly elected parliament convened for the first time last week, the island nation stands divided. The Shi‘a-dominated opposition boycotted last month’s elections and will be outside the political system for the foreseeable future, leaving little prospect for the community’s political advancement. Meanwhile, the predominantly Sunni electorate participated strongly in the polls and will move forward alone on a series of reforms and priorities that are most important to their community.

In other words, half of Bahrain is progressing politically while the other half remains frozen in place. This growing—and now essentially codified—split may increase social tensions and exacerbate the long-standing structural issues that led to the initial political crisis.

The Sunni community is more politically aware and empowered than they were four years ago, when a Shi‘a-dominated opposition took to the streets in Arab Spring-inspired protests. Loyalists’ demands for better government services, more transparency in government, and a more accountable parliament will become the political priorities for the next four years—with potentially large political and economic dividends for the community.

The Shi‘i community, meanwhile, remains politically disenfranchised and subject to strict policing. Its members frequently report economic discrimination for public jobs. But because the opposition, led by the officially registered political society al-Wefaq, chose to boycott the elections, neither the government nor the international community will see an immediate reason to push for political concessions.

November’s election was the first full parliamentary vote since opposition MPs resigned en masse in 2011, in protest of a crackdown against the Arab Spring-inspired protests that drew tens of thousands to the streets.

In the years since, Bahrain has struggled to overcome the crisis. The country’s crown prince spearheaded several attempts to hold a national dialogue that included opposition members, loyalists, and independents. But each fell short of a full consensus. Meanwhile, small-scale protests have continued in Bahrain’s Shi‘a-majority villages, often devolving into clashes with security forces. According to activists, an estimated 3,000 prisoners are now being held in relation to the unrest and as many as 150 have died.[1] Meanwhile, for the last 18 months, radical elements of the opposition have begun deploying rudimentary bombs and other explosives in retaliation. A handful of incidents have led to casualties, including most recently the death of a Jordanian police officer on December 8. The officer had been part of a security cooperation agreement between the two governments.[2]

In this context, both the Bahraini government and the international community saw the parliamentary vote as a benchmark that could bring the opposition back into the political system and turn the page on the last four years. Diplomats campaigned aggressively for the opposition to participate in the polls. Despite ongoing concerns about human rights, they argued that being in parliament was vital for the opposition’s ability to work for reform.

“We and other international partners were very disappointed that Wefaq didn’t take part,” said a Western diplomatic source.[3] “We thought that was a bad move and we all tried very hard to persuade them that it made sense to participate.”

The early signs for electoral participation were not promising. But in early January 2014, figures from Wefaq held a “frank and transparent”[4] meeting with the country’s crown prince that the group hoped would re-open talks and yield some progress. Prince Salman bin Isa al-Khalifa solicited proposals[5] from the opposition, as well as from non-opposition political societies, from which the Royal Court would put together a proposed agenda for a new national dialogue.

Some nine months later, Wefaq says it felt blindsided when the crown prince announced a series of proposed political reforms said to be the “common ground” between the various sides.[6] Although short on details, the proposals did include nods to at least some of the opposition’s key demands, such as electoral redistricting, a more empowered parliament, judicial independence, and some security sector reform.

Still, Wefaq said it had not been consulted since the spring and felt the proposals were unilateral. “We didn’t know that negotiations were over,” said Abdul Jalil Khalil Ebrahim, former head of Wefaq’s parliamentary bloc.[7] The bloc decided to boycott the polls, arguing that the elections would do little to heal political rifts.

According to some analysts in Bahrain, this decision stirred debate within the opposition, with certain parts of Wefaq seeking to participate while others remaining opposed. One candidate from the party ranks did register, though he later withdrew, and Ebrahim denied that the issue had caused any fractures.

By the time the election took place, the opposition did appear to coalesce around the boycott. Turnout in the two strongest opposition districts fell below 10 percent. While the majority likely boycotted by choice, there were also reports of intense community pressure deterring any hopeful voters from the polls.

While the opposition debated whether to participate, those not in the opposition, mostly Bahrain’s Sunni community, were taking the election seriously—arguably more so than any previous vote. The results from these districts indicate some democratic gains, including high percentages of voter turnout and impressive rates of punishment for candidates seen as failing to follow through on past promises.

Voters dealt a stunning loss to nearly all incumbents and political societies in favor of new faces and independents. Some in the Sunni community have taken to calling the new parliament the assembly of “The Unknowns.”

The vote marked the first time that elections have revolved largely around issues, argues Yacoub Al-Slaise, a co-founder of the Sunni youth coalition al-Fateh, which soon hopes to register as a political society. “This election was the first time that voters punished candidates who did not deliver,” he said.[8] “Maybe you did not vote for the best MP, but you got rid of the old one.”

Contributing to this dynamic was the rise of social media accounts documenting parliamentary accountability. One such Twitter feed with 122,000 followers, @DeertyBhr, posted lists of MPs who had voted for or against popular measures like a public sector salary increase.

Other candidates look to have been punished for sectarian rhetoric. For example, Sunni preacher Jassim Al Saeedi, an MP since 2002 famous for vitriolic attacks on Shi‘a, lost his seat by a landslide.[9] Analysts said voters were unconvinced by the MP’s tendency to blame Shi‘i Iran for many of Bahrain’s problems, rather than addressing internal solutions.

Electoral districting in September also likely contributed to the result. The new lines broke up or expanded some traditional constituencies of the country’s Sunni political societies, reducing their previous electoral advantage.[10]

Voter turnout was high—a priority for the government given the electoral boycott. Some local media indulged in fearmongering that may have pushed some to the polls. Local dailies cited unconfirmed reports, for example, that public services would be prioritized for those who participated in the election.[11] Citizens receive a stamp in their passports when they vote, and some feared they could be asked for this proof of participation when applying for jobs or soliciting public housing in the future.

The incoming parliament is likely to focus on the issues that its constituents care most about, among them public service provision, government salaries and pensions, and security.

The fact that the opposition is left out of parliament does not necessarily mean that the government will escape criticism. In fact, having stood by the ruling family in 2011 at the height of the unrest, many in the Sunni community now feel more empowered to ask for things they have long sought, such as a more efficient and transparent government.

Some of these demands align with the objectives of the opposition, including the empowerment of the elected parliament vis-à-vis an appointed upper chamber, the Shura Council.

“Parliament still has some limitations, and as we are elected, we need more power,” said incoming MP Mohammed Al Amadi.[12] He suggests a constitutional amendment that would ensure that a two-thirds majority in the lower chamber could circumvent laws needing the approval of the Shura.

Meanwhile, the prospects for the opposition to secure any significant political compromise look increasingly dim.

The opposition has in recent years turned its focus to the international community, hoping that pressure from Bahrain’s Western allies could encourage reform. But this dynamic is changing fast as regional insecurity heightens. Bahrain has joined a 60-country U.S.-led coalition against the Iraq and Syria-based militant group the Islamic State, and both Washington and London are relying on Bahrain’s naval facilities for their role in the campaign.

"Just because Wefaq didn’t take part in the electoral process doesn’t mean that it was not legitimate,” the Western diplomatic source said. “The crown prince has made clear that he wants to empower the parliament.  Everyone should welcome that."